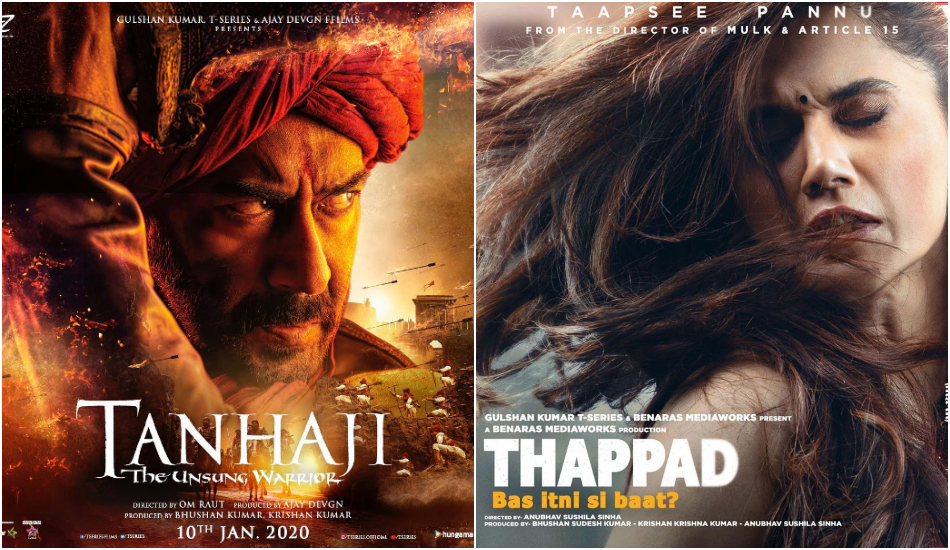 2020 wasn’t a great year for the Bollywood industry. Only a few films got a theatrical release, few were premiered on OTT platforms, and few got postponed to 2021. But still, Bollywood tried to keep us entertained throughout the year.

Tanhaji: The Unsung Warrior is the highest-grossing film of 2020. It went on to collect more than 250 crore (25015251 GBP) at the box office and even content-wise it was damn good.

Ashwiny Iyer Tiwari’s Panga didn’t do great business at the box office. But, it is clearly one of the best films of 2020. Also, we can’t forget Kangana’s amazing performance in it.

With Tanhaji: The Unsung Warrior, Saif Ali Khan got a much-needed boost in his career. But even his second release of 2020 Jawaani Jaaneman turned out to be a very good film. It was a refreshing movie.

Anubhav Sinha’s Thappad was a fantastic film. It had an amazing story, wonderful narration, and a top-notch performance by Taapsee Pannu. It is undoubtedly one of the best films made in Bollywood.

We never thought that a filmmaker would think of making a movie on the life of a character artist. But Hardik Mehta did that with Kaamyaab and impressed one and all with his storytelling. Also, Sanjay Mishra’s performance in it was amazing.

After the super success of Hindi Medium, the makers announced its sequel Angrezi Medium. But due to Irrfan Khan’s health, the film was delayed, and finally, it released in 2020. It was a beautiful film about a father-daughter relationship and also showcased how expensive it is to study internationally.

Dil Bechara marked casting director Mukesh Chhabra’s directorial debut, and well, he impressed us with his filmmaker skills. It was a beautiful film, and Sushant Singh Rajput and Sanjana Sanghi gave a wonderful performance.

Vidya Balan starrer Shakuntala Devi was the biopic on mathematician genius, Shakuntala Devi. Directed by Anu Menon, it was an enjoyable film and had the perfect amount of drama, emotions, and comedy.

Gunjan Saxena: The Kargil Girl, a biopic on IAF pilot Gunjan Saxena, was an amazing movie. Sharan Sharma had narrated the story of Saxena in a wonderful manner and Janhvi’s performance was also loved by one and all.

Last on the list we have Chhalaang. Hansal Mehta is one of the best directors we have in the industry and when he collaborated with Rajkummar Rao for the fifth time, we knew that Chhalaang will be special. It was different from Mehta’s previous movies, but the filmmaker impressed us once again with his narration.