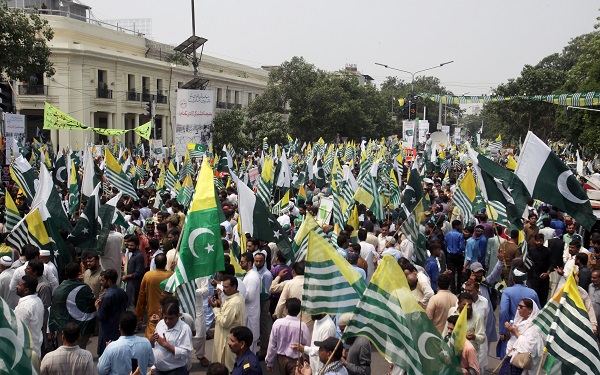 CITIES around Pakistan came to a standstill on Friday (30) as tens of thousands of people poured onto the streets in a government-led demonstration of solidarity with Kashmir, after India revoked its autonomy this month.

The Pakistani national anthem and an anthem for Kashmir played across television and radio, while traffic came to a standstill, traffic lights were switched off and trains stopped, as part of prime minister Imran Khan’s campaign to draw global attention to the Himalayan region.

“We are with them in their testing times. The message that goes out of here today is that as long as Kashmiris don’t get freedom, we will stand with them,” Khan told thousands of demonstrators in the capital, Islamabad.

The Muslim-majority region has long been a flashpoint between India and Pakistan. India has battled separatist militants in its part of Kashmir since the late 1980s, accusing Muslim Pakistan of supporting the insurgents.

Pakistan denies that saying it only offers political support to the people of Kashmir, who Pakistan says are oppressed by the Indian government and its security forces.

India stripped special status of Kashmir on August 5, blocking the right of the Indian state of Jammu and Kashmir to frame its own laws and allowing non-residents to buy property there. The government said the reform would facilitate Kashmir’s development, to the benefit of all.

“I want to tell you, Narendra Modi, that we will give a befitting response. Our armed forces are ready,” Khan told the rally.

Pakistan has sought the support of the US, Britain, and others to press India over Kashmir.

But India says it is an internal matter and that it would only hold talks with Pakistan if it stops supporting militants operating from its soil.