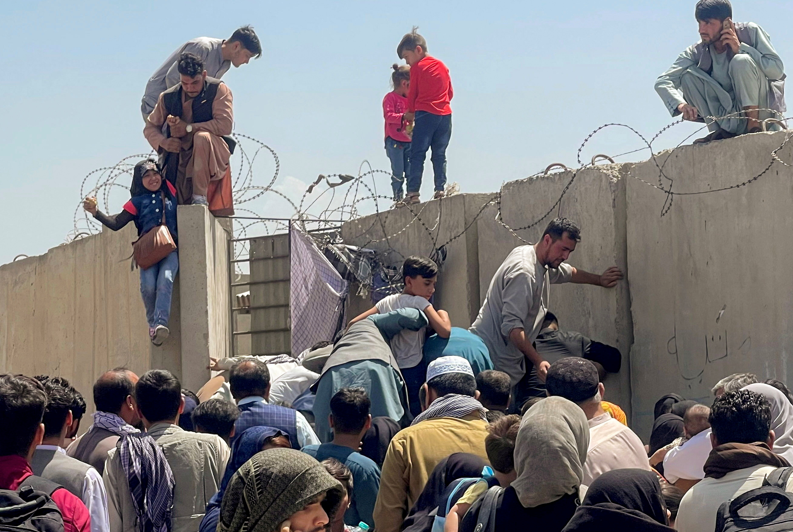 CELEBRATIONS to mark the 74th anniversary of Indian independence and the creation of Pakistan have been overshadowed by the astonishingly swift take-over of Afghanistan by the Taliban.

Afghanistan has been in the British psyche for a long time. Whenever I think of Afghanistan, I recall Sherlock Holmes’s remark to Dr John Watson when they first meet in A Study in Scarlet: “You have been in Afghanistan, I perceive.”

I also think of the 1957 Bengali film, Kabuliwala, based on an 1892 Rabindranath Tagore tale and directed by Tapan Sinha. There was a Hindi film version in 1961, directed by Hemen Gupta and starring Balraj Sahni.

The story painted a portrait of Rahmat, a trader from Kabul who sells his wares in the streets of Calcutta (now Kolkata), as a kindly man. Very different, in other words, from the Taliban.

There are worst- and best-case scenarios. The latter is having learnt from past mistakes, the Taliban will not go out of their way to provoke the west.

The worst is Afghanistan will once again become a centre of terrorism – and, for example, attract young people from Britain as happened with Syria and the likes of Shamima Begum. But another US and British intervention in Afghanistan seems unlikely.

With helicopters rescuing Americans from the US embassy in Kabul, there are obvious comparisons with the frantic withdrawal from Saigon in 1975. Who knows, but in time, the US and the UK will learn to love the Taliban sufficiently to want to trade with them.

The Taliban take-over of Afghanistan is a huge victory for Pakistani intelligence. I listened carefully to an interview given last week to Radio 4’s The World Tonight by Paul Wolfowitz, who was the hawkish US deputy secretary of state under president George W Bush.

Wolfowitz, described by the BBC as “one of the chief architects of the war in Iraq”, was unusually forthright in condemning Pakistan’s unhelpful role in Afghanistan.

The US action in Afghanistan after 9/11 “was a clear defeat of the Taliban,” Wolfowitz began.

“It was a clear end of Afghanistan as a sanctuary for terrorists,” he continued. “And unfortunately, it looks like we’re coming back to that result, which we were successful in a relatively short time in eliminating. That’s the first point.

“The second is that it is now an inspiration for other terrorists.

“And there’s a third factor here, which wasn’t present before – and that is China. I believe that it’s not an accident that the Taliban delegation went to Beijing recently.

“With the US gone, the Taliban, who depend critically on Pakistan for support – and, in fact, are so dependent they’re almost an arm of the Pakistani intelligence service – are now going to depend on China to protect Pakistan from India. And that’s going to give China enormous influence and to enable them to push things in the direction that I just mentioned.”

He added: “I think Pakistan has been a terrible troublemaker in Afghanistan. If we had been a little less dependent on Pakistan, for the support of those 100,000 plus (US) troops, we would have been more prepared to put pressure on that government and tell them to knock it off. It’s shocking that our so-called ally was actively undermining us.”

He admitted the looming American defeat in Afghanistan was “up there with Vietnam, unfortunately. And it may have repercussions as long as Vietnam did.”

What has happened in Afghanistan could indirectly harm the generally good relationships that exists between one million Pakistanis and 2.5 million Indians in Britain. We shouldn’t forget we live here and do our best to foster harmonious relations.

Lording it over Lord’s

AS A result of the Black Lives Matter movement, it is becoming apparent day
by day just how much of Britain is linked either to the slave trade or colonial rule.

In Stroud, Gloucestershire, there is controversy over a 240-year-old “Blackboy  clock”, which strikes a bell hourly in the centre of town. Stroud has an antiracist campaign which wants the clock removed because it seems linked with the slave trade.

A local artist, Dan Guthrie, whose family moved to the town in the Windrush migration, points out: “The boy has huge red lips and is wearing a golden leaf skirt – and he is weirdly enslaved to the clock mechanism when it’s working. It is an offensive racist relic from the transatlantic slave trade.”

But the town’s Conservative MP, Siobhan Baillie, said “a certain minority of people with loud voices have an unquenchable desire to be constantly finding things to be outraged at” and “any suggestion that I am trying to whip up a culture war is absolute rubbish”.

Meanwhile, at Lord’s, the MCC (Marylebone Cricket Club) has decided not to rename the stand named after Sir Pelham Warner, the grand old man of English cricket, or remove his portraits.

Warner was born in Trinidad in 1873, some 70 years after the abolition of the slave trade. But he was the grandson of Colonel Edward Warner, the owner of two lucrative tobacco and sugar plantations – one in Trinidad named Woodford Dale, and another in Dominica named Hatton Garden.

The family claimed compensation from the British government following the end of the slave trade.

The MCC felt it would be wrong to blame Sir Pelham for the actions of his grandfather and declared him, “Not out”.

However, Dr Richard Sargeant, a retired historian, sociologist and former cricketer, said: “The decision not to remove Warner or his name doesn’t surprise me in the least, because the MCC is in part a child of colonialism and is embedded in colonialism. It reflects an awful kind of complacency.”

Shift for The Lord of the Rings

THERE was a time only a few years ago when the Cannes Film Festival would not accept movies from Amazon for competition as these were not considered “proper cinema”.

Now, Amazon has become one of the biggest players in films. How big we learned last week when Amazon Studios announced it was moving production of the TV adaptation of JRR Tolkien’s The Lord of the Rings from New Zealand to Britain.

Covid appears to be one reason for the shift, with New Zealand’s prime minister Jacinda Ardern announcing the country’s borders will remain closed until at least the end of the year.

But Amazon Studios, the film and TV arm of the technology giant, said the move was part of a plan to expand its production space and consolidate its “footprint” in the UK.

Stuart Nash, New Zealand’s economic development minister, admitted he was “gutted” by Amazon’s move, while Britain’s culture secretary Oliver Dowden expressed delight that “thousands of high-quality jobs all across the UK will be created and supported by The Lord of the Rings television series”.

The TV adaptation is set in the second age of Middle Earth, thousands of years before the events in Tolkien’s books. Amazon bought the TV rights for The Lord of the Rings for $250 million (£181m) in November 2017, making a five-season production commitment worth at least $1bn (£722,084m).

The first series, with eight episodes, has already been filmed in New Zealand and will be shown on Prime Video in September 2022. The second and subsequent three series will be shot in Britain, which, according to Tolkien enthusiasts, was where the author had imagined Middle Earth to be the location.

If Amazon Studios goes for diversity, the move to the UK could be good news for the British Asian film fraternity.