‘Eat Out to Help Out’ scheme gets ‘amazing’ response, used over 10.5mn times in first week 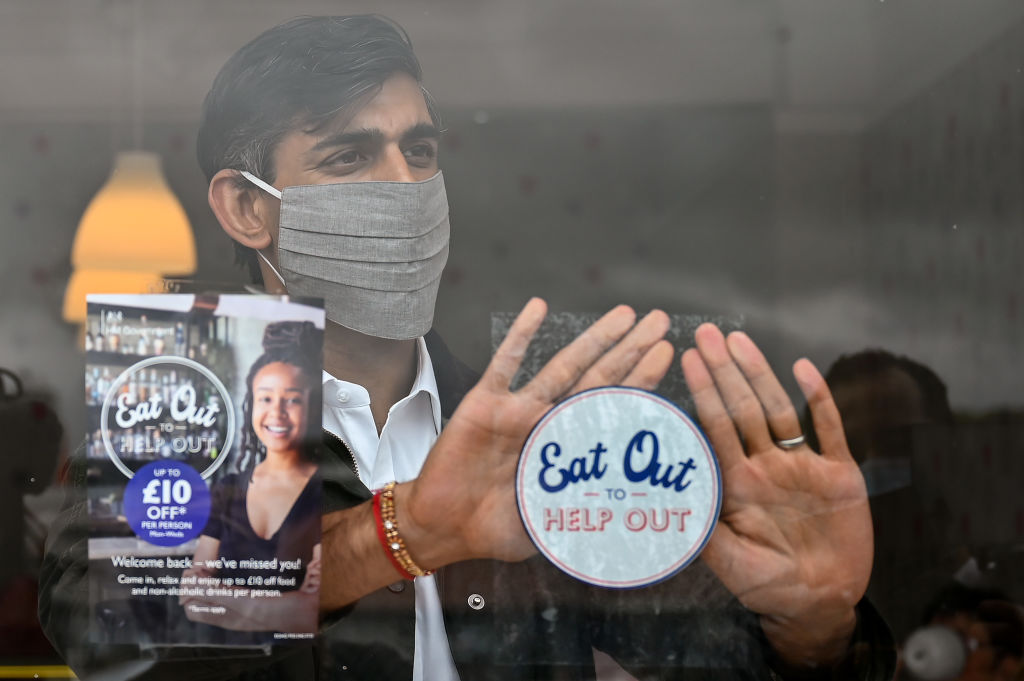 Britain's Chancellor of the Exchequer Rishi Sunak pictured during a visits to local businesses in Rothesay on the Isle of Bute, Scotland on August 07, 2020. (Photo: JEFF J MITCHELL/AFP via Getty Images)

RISHI SUNAK’S ‘Eat Out to Help Out’ scheme, offering 50 per cent meal discounts across restaurants, cafes and pubs in the UK, seems to be a big hit as it has already been used more than 10.5 million times in its first week.

The chancellor termed the figures were “amazing”, saying it was an indication that “our plan for jobs is delivering”.

“Britons are eating out to help out in big numbers,” he added. “And they aren’t just getting a great deal – they’re supporting the almost two million people employed in this sector.”

As per the scheme, the government foots the bill for 50 per cent of a meal at participating restaurants between Monday to Wednesday.

The half-price discount runs throughout August and applies to all food and non-alcoholic drinks consumed on the premises, with a maximum discount per person of £10, which is automatically deducted from the bill.

“Our Eat Out to Help Out scheme’s number one aim is to help protect the jobs of 1.8 million chefs, waiters and restaurateurs by boosting demand and getting customers through the door,” the chancellor said.

“More than 72,000 establishments will be serving discounted meals across the country, with the government paying half the bill. The industry is a vital ingredient to our economy and it”s been hit hard by coronavirus, so enjoy summer safely by showing your favourite places your support – we’ll pay half.”

The scheme is part of Sunak’s wider £30-billion “Plan for Jobs”, aimed at spurring the UK’s economic recovery from the prolonged coronavirus shutdown since March.

The scheme is aimed at safeguarding the jobs of the hospitality industry’s nearly 1.8 million employees by encouraging people to safely return to their local restaurants, cafes and pubs where social-distancing rules allow.

According to the Treasury, around 80 per cent of hospitality firms stopped trading in April, with 1.4 million workers furloughed – or put on forced leave – the highest of any sector.

Other measures announced by Sunak to “protect, support and create jobs” as the UK gradually tries to emerge from lockdown include cutting VAT for tourism and hospitality by 15 per cent, a £2bn Kickstart Scheme and an £8.8bn investment in new infrastructure, decarbonisation and maintenance projects.

Meanwhile, latest figures released by the Office for National Statistics (ONS) on Tuesday reflected the real cost of the lockdown as it shows that UK employment fell by the largest amount in over a decade between April and June.

The ONS said that its data showed that the number of people in work had decreased by 220,000, the largest quarterly decrease since May to July 2009 during the peak of the financial crisis.

“The groups of people most affected are younger workers, 24 and under, or older workers and those in more routine or less skilled jobs,” said Jonathan Athow, deputy national statistician at the ONS.

“This is concerning, as it’s harder for these groups to find a new job or get into a job as easily as other workers.”

Sunak has repeatedly warned of tough times ahead as the UK begins to lift lockdown restrictions in phases and opens up different sectors of the economy.

“Today’s labour market stats make it clear that our unprecedented support measures, including the furlough and self-employed support schemes, are working to safeguard millions of jobs and livelihoods that could otherwise have been lost,” he said.

The chancellor reiterated that while the government would not be able to protect every job, it did have “a clear plan to protect, support and create jobs to ensure that nobody is left without hope”.

The opposition parties have described the latest employment data as “extremely worrying”.