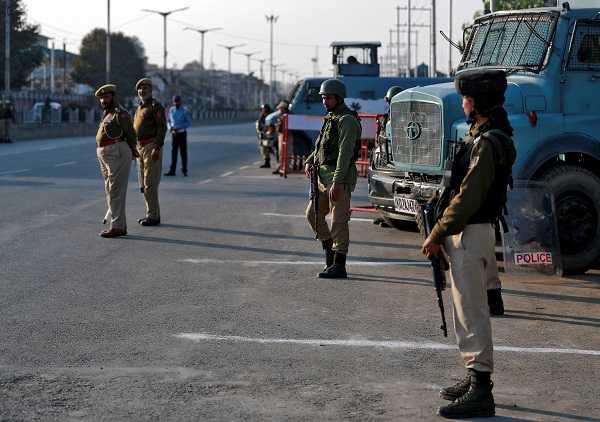 SHOPS and offices were shut in Kashmir on Thursday (31) and the streets largely deserted as federal authorities formally revoked the restive state’s constitutional autonomy and split it into two federal territories.

Prime minister Narendra Modi’s decision in August to change Kashmir’s status and tighten its grip over a region has stoked anger and resentment while a three-decade armed revolt rages.

Pakistan has condemned the move. Its ally China also slammed India for unilaterally changing its status.

Just after midnight on Wednesday (30), the federal government’s orders went into effect, dividing up the old state of Jammu and Kashmir into two union territories – one Jammu and Kashmir, and the other the Buddhist-dominated enclave of Ladakh.

Both will be directly ruled by Delhi, and new lieutenant governors were sworn in at a high-security governor’s premises later on Thursday.

“The unfulfilled dream of integrating Jammu and Kashmir has been accomplished,” said Home Minister Amit Shah, who is leading the political strategy to deal with Kashmir.

India is hoping that by opening up property rights in Kashmir to people from outside the region it can reignite economic growth, create jobs and turn the focus away from the militancy in which more than 40,000 people have died.

It blames Pakistan for keeping the revolt alive, allegations that the neighbour denies. Chinese Foreign Ministry spokesman Geng Shuang said Kashmir was a dispute left from history and it should be peacefully resolved.

“The Indian government officially announced the establishment of so called Jammu Kashmir territory and Ladakh Union territory which included some of China’s territory into its administrative jurisdiction,” Geng said at a news briefing.

“China deplores and firmly opposed that. India unilaterally changes its domestic law and administrative divisions, challenging China’s sovereignty and interests. This is awful and void, and this is not effective in any way and will not change the fact that the area is under China’s actual control.”

On Thursday, there was little traffic on the streets of Srinagar, the main city in Kashmir, except for children going to school to complete hastily arranged exams. Many children have been kept out of school since the August clamp-down.

Shops were shut as a mark of opposition against Kashmir’s new status.

Authorities deployed additional paramilitary forces in parts of Srinagar where small protests have erupted in the past since the August 5 announcement of the change of status.

Still, there were 20 small incidents of stone-pelting reported from Srinagar and other parts of the Kashmir valley on Wednesday, a state police official said.

Former Jammu and Kashmir chief minister Mehbooba Mufti, one of scores of politicians in detention to prevent large protests from breaking out, said the federal government must engage with Kashmiris before they become even more alienated.