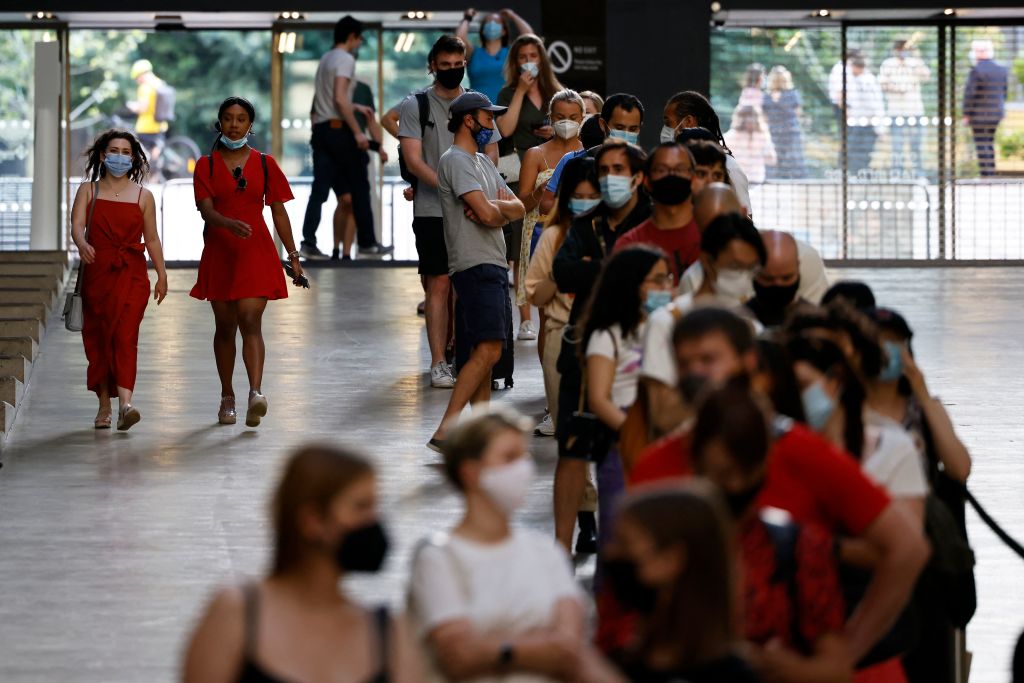 Members of the public queue to receive the Pfizer-BioNTech Covid-19 vaccine in the Turbine Hall at a temporary Covid-19 vaccine centre at the Tate Modern in central London on July 16, 2021. (Photo by TOLGA AKMEN/AFP via Getty Images)

RESEARCHERS have backed proposals for Covid boosters in the autumn as UK studies revealed that protective antibodies can wane substantially within weeks of second vaccine shots, reported the Guardian.

Scientists said that if the decline of antibodies persist the effectiveness of the vaccines may diminish.

The UCL Virus Watch study found that antibodies generated by two doses of the Oxford/AstraZeneca and Pfizer/BioNTech vaccines started to wane as early as six weeks after the second shot, in some cases falling more than 50 per cent over 10 weeks, the report added.

Experts suggest a booster campaign especially for those who were vaccinated early and with the Oxford/AstraZeneca shot.

“We’re concerned that if they carry on dropping at the rate we’ve seen, the protective effects of the vaccines will start to drop too, and the big question is, when is that going to happen?”

Interim advice from the Joint Committee on Vaccination and Immunisation (JCVI) last month encouraged the NHS to prepare for an autumn booster programme, but a final decision on whether to proceed has not been made.

The UCL team analysed blood from 605 vaccinated people mostly in their 50s and 60s. According to the study, a double dose of Pfizer/BioNTech tended to produce far more antibodies against the coronavirus than two shots of the Oxford/AstraZeneca vaccine.

Three to six weeks after full vaccination with Pfizer, antibody levels typically stood at about 7,500 units per millilitre (ml), but more than halved to 3,320 units per ml after 10 weeks.

Since publishing the results in a letter to the Lancet, the researchers have seen the same trend in a further 4,500 participants in the study, the newspaper report added.

It is normal for antibody levels to wane over time and for the immune system to “remember” the infection with memory B cells. Should the virus invade, these cells rapidly churn out antibodies targeted at the virus. Further protection comes from T cells, which destroy infected cells and limit the severity of the disease.

Aldridge added: “Antibodies are not the perfect measure of risk; we don’t know if there’s a magic number, as it were, where the risk of infection or hospitalisation becomes important. But we think these data support the JCVI case for boosters, with priority for the clinically vulnerable, the over-70s, and all people living in residential care homes for older adults.”

The Guardian report added that the findings have been considered by the JCVI but are unlikely to have a major impact on discussions over boosters.

“The waning of antibody responses over time may support booster strategies, especially in the setting of a third wave in the UK with Delta variant, where infection episodes are now common after two vaccine doses,” Prof Eleanor Barnes, a hepatologist at the University of Oxford, told the Guardian. “However, even with waning antibody levels, memory B cells and T cells may well protect from severe disease.”

Prof Matthew Snape, a vaccinologist at Oxford University, said: “Studies such as this do not in themselves provide evidence of waning protection from vaccines but are really important to help us understand what’s going on if population-based studies showed any drop-off in protection with increasing time since immunisation.

“A decline in antibodies in the blood following immunisation is to be expected and does not necessarily correspond to an increase risk of disease. However, it’s clear that ongoing protection from vaccines for months to years after immunisation can’t be assumed, hence the importance of ongoing vigilance for any increase in breakthrough infections.”