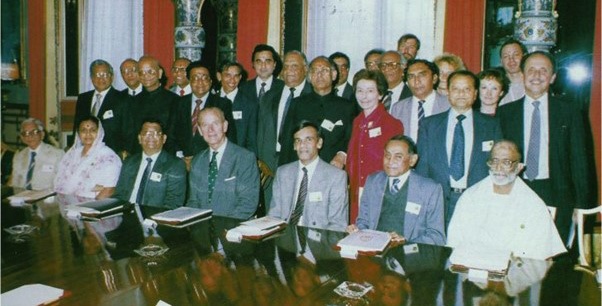 Prince Philip was part of significant moments of history for the Jain community in the UK.
Follow Us

THE announcement of the peaceful passing of HRH Prince Philip, the Duke of Edinburgh, has saddened us all.

His life has been one of ser­vice and duty. He was also a great supporter of the Jain com­munity for more than 30 years.

In 1990, 30 eminent scholars produced the Jain Declaration on Nature, setting out funda­mental Jain values, and empha­sising how we are in harmony with the environment.

This work was presented to Prince Philip in his role as presi­dent of the World Wide Fund for Nature International, at a cere­mony at Buckingham Palace, with 21 Jain leaders and scholars from across the world. This marked the recognition of the Jain religion in the UK.

In 1995, the first full-scale ex­hibition of Jain art in Europe opened at the Victoria and Al­bert Museum in London. The Institute of Jainology was the main organiser and secured the joint patronage of the Queen and Dr Shankar Dayal Sharma, then president of India. Prince Philip opened the exhibition and is pictured (above) greeting the chairman of the Institute of Jainology, RP Chandaria.

In 1991, the Institute of Jainol­ogy undertook the work of cata­loguing the Jain collection of the British Library. This mammoth project was managed by Berlin University’s Professor Chan­drabhal Tripathi, and Professor Nalini Balbir of Sorbonne Uni­versity, assisted by Dr Kanubhai Sheth and Dr Kalpnaben Sheth both from Ahmedabad, India.

When the catalogue was pub­lished in 2007, Prince Philip agreed that the international launch should take place at Buckingham Palace, in the pres­ence of members of the interna­tional Jain community.

In these years, we have found Prince Philip to be a great sup­porter of the environment, of our community and of young people. His passing is a huge loss for the nation and his fami­ly. We pray that his soul finds eternal peace.

Nemu Chandaria is chairman of the Institute of Jainology.