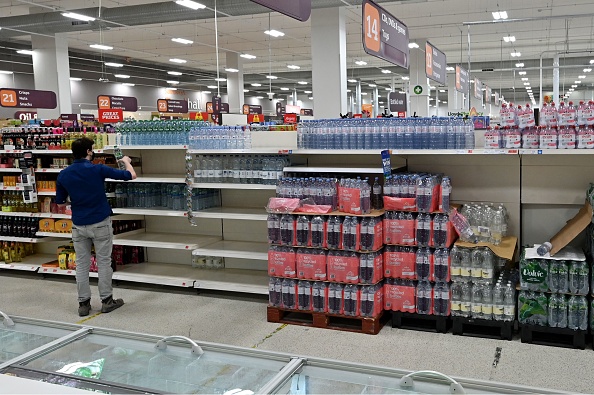 A shopper chooses a product from partially filled shelves in a supermarket at Nine Elms, south London on July 22, 2021. – British supermarkets and suppliers warned today of possible food shortages due to staff self-isolating, as rising coronavirus cases threaten chaos after the government controversially eased all restrictions earlier this week. (Photo by JUSTIN TALLIS / AFP) (Photo by JUSTIN TALLIS/AFP via Getty Images)

DAILY Covid testing scheme will be rolled out for food and drink supply chain staff, the government announced on Thursday (22). The move came after the concern raised by supermarkets, business groups and shoppers over empty shelves caused by lack of staff and delay in deliveries allegedly due to widespread ‘pingdemic’ in the country.

The Department for Environment, Food and Rural Affairs (Defra) said the scheme would be rolled out to around 500 sites next week, allowing around 10,000 staff who have been ‘pinged’ by the Covid-19 app to keep working if they test negative, rather than isolating.

The retail staff working inside the supermarkets will not qualify in the newly-announced scheme.

“As we manage this virus and do everything we can to break chains of transmission, daily contact testing of workers in this vital sector will help to minimise the disruption caused by rising cases in the coming weeks, while ensuring workers are not put at risk,” health secretary Sajid Javid said.

Apart from food and drink supply chain, the new guidelines for daily testing for Covid will be applicable to 16 key sectors including health, transport and energy, as per the announcement.

Supermarkets, haulage firms and manufacturers have reported difficulties keeping operations going, as an increased numbers of workers were told to stay home amid the widespread pingdemic.

Official data showed the NHS app had told nearly 620,000 people to isolate in England and Wales in the week up to July 14.

Images of empty shelves were pouring in from across the country with major supermarkets claiming that they were facing difficulties.

Sainsbury’s, Britain’s second largest grocer, said customers may not be able to find the exact product they want.

“Large quantities of products are being delivered to stores daily and our colleagues are focused on getting them onto the shelves as quickly as they can,” a spokesman said.

Confederation of British Industry (CBI) warned in a tweet that the current approach to self-isolation is “closing down the economy rather than opening it up.”

The director general of business lobby group the CBI, Tony Danker, had warned that companies across Britain risked “grinding to a halt” without a rapid change in direction from ministers.