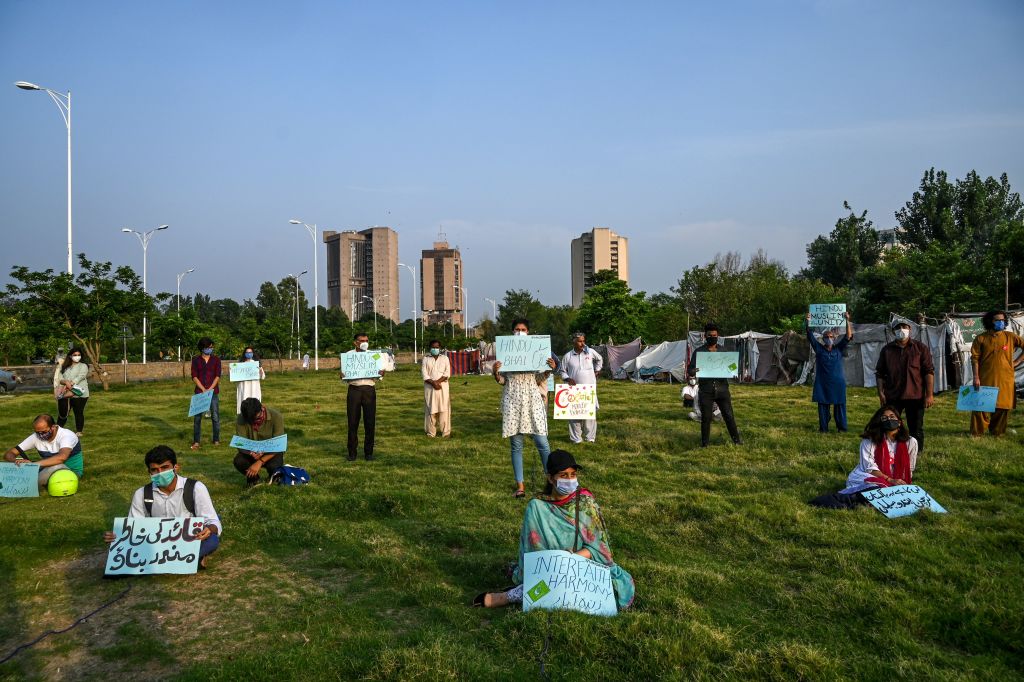 Demonstrators hold placards during a protest in Islamabad on July 8, 2020, as they urge the government to allow the construction of a Hindu temple in the Pakistan’s capital. (Photo by AAMIR QURESHI/AFP via Getty Images)

ISLAMABAD’S authorities have restored a piece of land allotted to the Hindu community for the construction of the first temple in the Pakistani capital following a public outcry after officials told a top court that the allotment was cancelled.

The Capital Development Authority (CDA) revealed the cancellation of the plot on Monday (9) during the hearing of a case in the Islamabad High Court (IHC), the Dawn newspaper reported on Tuesday (10).

Javed Iqbal, the CDA’s counsel, told the court that the civic agency had already cancelled the plot for the Hindu community in February this year for not starting construction on it.

According to the report, 0.5 acres of land at H-9/2 in Islamabad was allotted to the community in 2016 for the construction of the first-ever Hindu temple, cremation and community centre.

Following the news of the cancellation of the plot, the mainstream and criticised the CDA, forcing it to withdraw the notification.

CDA spokesperson Syed Asif Raza said that following a decision of the government, allotments of all lands issued to various offices, universities and other institutions on which no construction work had been started were cancelled.

However, officials in the civic agency misinterpreted the Cabinet decision and had cancelled the plot allotted to the Hindu community.

He said approval had already been given for the construction of a boundary wall on the land allotted for the temple, so the decision of the Cabinet did not apply to it.

This plot did not fall in the category of those where construction had not taken place, he added.

Asked if the CDA will initiate an inquiry against those who misinterpreted the Cabinet’s decision, he said: “actually, there was no bad intention involved in this case.”

“There was some sort of confusion and misinterpretation of the Cabinet decision and when the matter was brought into the notice of high-ups, the allotment was restored immediately,” he said.

In July last year, after a strong reaction from right-wing groups, which criticised the government for its intention to build a Hindu temple with government funding, the CDA had stopped the community from constructing the boundary wall around the plot.

However, the matter was resolved in December when the city managers issued permission to the community to raise the boundary wall.

There is no temple and cremation centre in Islamabad for the Hindu community. After lots of efforts by the community and on the direction of the Human Rights Commission of Pakistan, the CDA allotted the land to the community in 2016.

In the past, there was a temple in the Saidpur village area of Islamabad but that was abandoned decades ago.