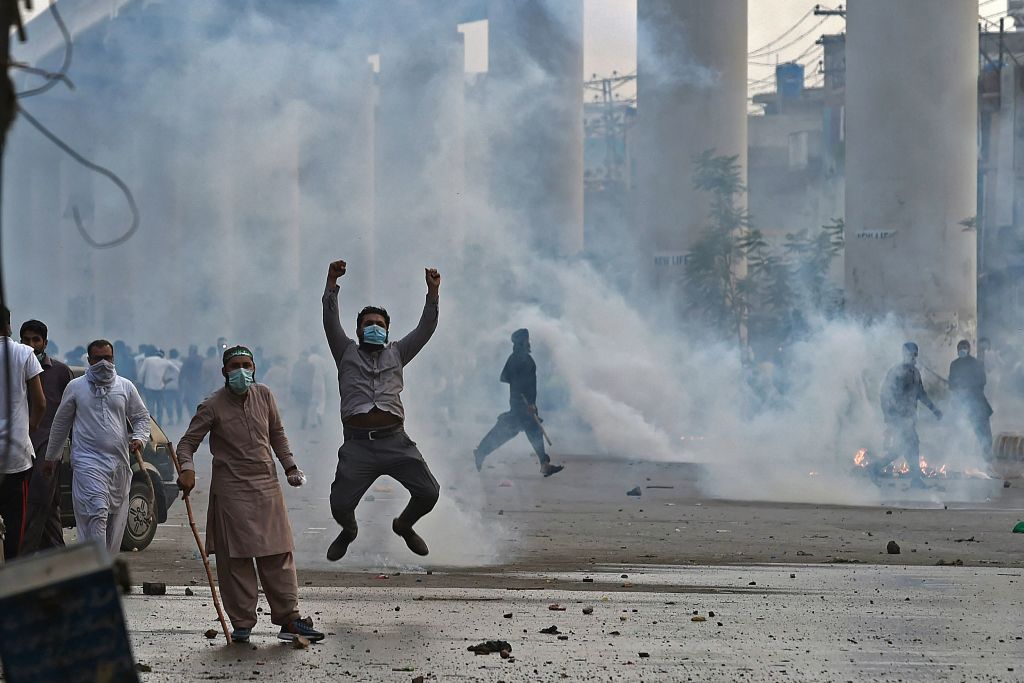 Police use tear gas to disperse supporters of Tehreek-e-Labbaik Pakistan (TLP) during a protest in Lahore on April 12, 2021, after the arrest of their leader, who has called for the expulsion of the French ambassador. (Photo by ARIF ALI/AFP via Getty Images)

PAKISTAN’s parliament on Friday (23) again deferred debating the fate of the French ambassador, with the government seemingly putting a lid on bloody anti-France protests that rocked the country for a week.

A resolution tabled Wednesday (21) called for the national assembly to debate whether to expel the French envoy, for the assembly to condemn Western blasphemy, for Muslim nations to unite on the issue, and for authorities to provide space in cities for future protests.

But Friday’s session descended into rowdiness after members disagreed on how to proceed — with some chanting anti-French slogans and others displaying a poster calling for the envoy to be booted out.

The speaker adjourned the session indefinitely.

Still, the resolution appears to have taken the steam out of an anti-France campaign waged for months by the Tehreek-i-Labbaik Pakistan (TLP) since president Emmanuel Macron defended the right of a satirical magazine to republish cartoons depicting the Prophet Mohammed — an act deemed blasphemous by many Muslims.

Supporters of the upstart radical party protested violently across the country last week when its leader was arrested after calling for a march on the capital to demand the French envoy’s expulsion.

As the protests grew, the French embassy recommended all its citizens leave the country — a call that appeared to go largely unheeded.

Despite the TLP being banned last week under anti-terror laws — and its leader’s continued detention — party elders on Tuesday called off further action.

“We have not given anything away,” Information Minister Fawad Chaudhry told a news conference Wednesday.

“They have realised the state is serious,” added Human Rights minister Shireen Mazari.

Prime Minister Imran Khan has in the past been accused of appeasing the TLP, fearful of antagonising Pakistan’s conservatives.

On Monday (19) he had pleaded with the group to end its violent campaign to oust the French ambassador, saying the unrest was harming the nation.

“It doesn’t make any difference to France,” he said in a national address broadcast on television.

“If we keep protesting our whole lives we would only be damaging our own country and it will not impact (the West).”

Few issues are as galvanising in Pakistan as blasphemy, and even the slightest suggestion of an insult to Islam can supercharge protests, incite lynchings, and unite the country’s warring political parties.