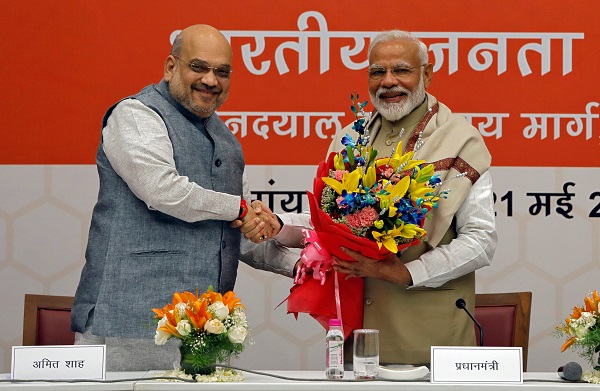 Shah, who has long been Modi’s backroom strategist, helped run one of India’s most divisive election campaigns over the past six weeks to rouse the Bharatiya Janata Party’s nationalist base and overcome the loss of key state elections in December.

Their efforts blunted voter discontent at lack of jobs and farm distress by portraying the opposition as weak and indecisive at best and at worst, appeasing minority Muslims and arch foe Pakistan, to deftly exploit national security fears.

“Modi and Shah work in tandem,” said a BJP official who has worked closely with the steely-eyed 54-year-old Shah.

“There is no doubt that Modi is India’s most popular leader and national figure. Translating his personal popularity into a political victory…requires planning and execution to the last detail. Shah has done that to near perfection.”

Vote-counting trends suggest Modi’s ruling alliance could win an even bigger parliamentary majority than in 2014, showing that the BJP not only held the northern heartland but made huge gains in the east, a political strategy that Shah launched.

“From a backroom guy who was a bit diffident about all the charges pending against him, Amit Shah’s transition is complete. He is now the legitimised inheritor of Modi’s legacy.”

Modi ran the government for five years with unquestioned authority while Shah, a Hindu hardliner who also hails from the prime minister’s western home state of Gujarat, presided over the BJP with an iron hand, as its chief.

For more than a year, he focused propaganda efforts on the eastern state of West Bengal, which is ruled by a firebrand regional leader supported by the state’s Muslims.

Shah fuelled nationalist sentiment by accusing his rivals of appeasing Muslims with funding for clerics and religious schools that turned the state into a replica of neighbouring Bangladesh, a Muslim-majority country and source of illegal immigrants.

“The BJP may just have cracked open the formula to winning over Bengali votes, and the credit is Shah’s,” said Sandeep Shastri, pro vice chancellor of Jain University in the southern city of Bengaluru.

Shah kicked off a campaign last month against Muslim immigrants, likening them to termites, while backing citizenship measures for Buddhists, Hindus and Sikhs from neighbouring countries of Afgahnistan, Bangladesh and Pakistan.

Then he mocked Rahul Gandhi, the chief of the biggest opposition Congress party, for choosing to run from a Muslim-dominated constituency in the southern state of Kerala.

“When a procession is taken out there, it is difficult to make out whether it is an Indian or a Pakistani procession,” he said, sparking renewed accusations that Muslims were not seen as citizens.

Critics have long accused the BJP of a deep-seated hostility against India’s 180 million Muslims. The party denies any bias but says it opposes appeasement of any community.

Shah’s office did not respond to a request for an interview or comments. But party spokesman GVL Narasimha Rao said the opposition had built its campaign on charges against Shah that had not stuck.

“The election is a slap for the abusive opposition that made baseless charges and spread lies,” he added.

Both Modi and Shah emerged from the cauldron of politics in their western home state of Gujarat.

A relentless politician, Shah has himself run 29 elections from municipal bodies to parliament and lost none. He travelled 150,000 km (93,200 miles) to address 161 public rallies during the election, he said last week.

“They have been political associates for 30 years-plus,” said a Gujarat state official. “They know each other’s secrets, theirs has been a relationship of mutual trust, and gains from the association.”

Both have been exonerated over concerns about their conduct towards Muslims.

In 2002, Modi faced accusations of looking the other way when mobs attacked Muslims in revenge for the burning of Hindu pilgrims in a train in the worst sectarian bloodletting in independent India. But a special investigation ordered by the Supreme Court absolved him of complicity.

Shah himself was acquitted in 2014 of charges levelled in 2010 over the extra-judicial killing of Muslims accused of terrorism, when he was the home minister in Gujarat.

Shah could be a potential replacement once Modi bows out when he turns 75 in 2025, a rule the prime minister adopted to edge out older party leaders who had sought to resist his rise.

“It’s some time off, but at the moment he is best placed to succeed him,” added Mukhopadhyay, who has specialised in studying the BJP and right-wing groups allied to it.

Shah was not gunning for any post, said the official who had worked with him, but added that he would be ready for any government responsibility as Modi’s “man of the match”, using the cricketing parlance beloved of millions of Indians.