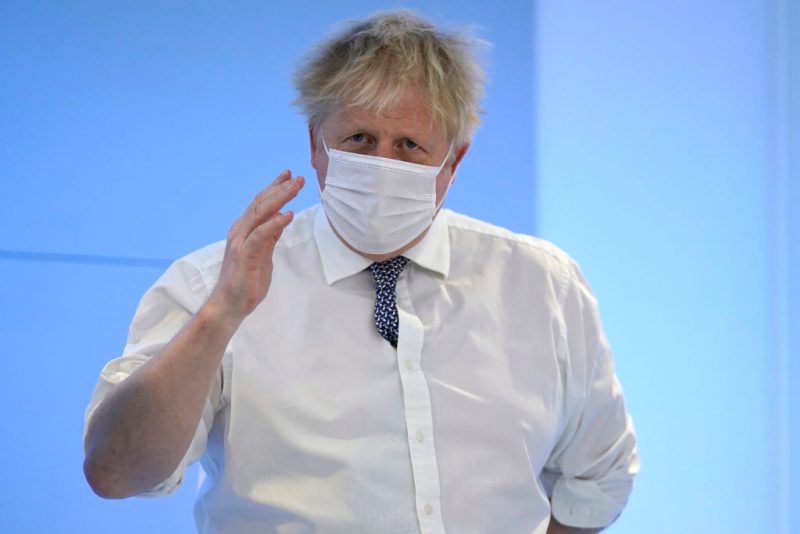 Prime Minister Boris Johnson during his visit to the Rutherford Diagnostic Centre in Taunton, Somerset. (Photo by Andrew Matthews-WPA Pool/Getty Images)
Follow Us

UK prime minister Boris Johnson has dismissed new allegations that his aides had tried to “blackmail” and threaten Conservative rebels, in a potentially criminal twist to Downing Street’s “partygate” scandal.

Senior Tory William Wragg disclosed the alleged intimidation campaign as Downing Street battles to shore up Johnson against calls from within the party for his resignation.

“The intimidation of a member of parliament is a serious matter. Reports of which I am aware would seem to constitute blackmail,” said Wragg, one of seven Tory MPs who have publicly called for a party confidence vote.

Addressing MPs, Wragg said any affected members should report it the police and to the Speaker’s office in the House of Commons.

Speaker Lindsay Hoyle, addressing the chamber in sombre tones, said any such campaign would amount to “contempt” of parliament, which is a criminal offence.

“What I am focused on is what we’re doing to deal with the number one priority of the British people, which is coming through Covid,” he said on a visit to a medical clinic in southwest England.

Johnson refused to confirm his aides’ assertion that he would fight any no-confidence vote and not comment further on the dramatic defection of Conservative MP Christian Wakeford to the Labour party on Wednesday (19).

The alleged intimidation campaign includes threats to withdraw funding from rebels’ constituencies, and to leak damaging stories to the media.

Wakeford said he had been told his seat in northwest England could lose a school if he did not fall into line.

Prior to Wragg’s explosive intervention, Johnson allies had been talking up the prime minister’s chances of survival, after Wakeford’s cross-party switch focused Tory minds on the threat from a resurgent Labour opposition.

One anti-Johnson plot by younger Tory MPs, livid at breaches of lockdowns by partying Downing Street staff, appeared to be fizzling out despite one senior backbencher telling him to his face to quit, “in the name of God”.

“The prime minister is probably thanking Christian for what he did because it’s made a lot of people think again, think twice,” Tory MP Andrew Percy told BBC radio.

“I think people have recognised that actually this constant navel-gazing and internal debating is only to the advantage of our political opponents,” he said.

Before Wakeford’s defection, the plotters appeared confident that they were close to the 54 letters needed to force a no-confidence vote in Johnson by Conservative MPs.

But the secretive process remained on hold, with some rebels even withdrawing their letters in response to Wakeford joining Labour, according to reports.

Critics accuse Johnson of lying to parliament about what he knew and when, with regard to boozy parties held in Downing Street in apparent breach of his own government’s Covid rules over the past two years.

While apologising for the parties, Johnson denies misleading the country, and insists that all sides should await the findings of an internal inquiry by senior civil servant Sue Gray.