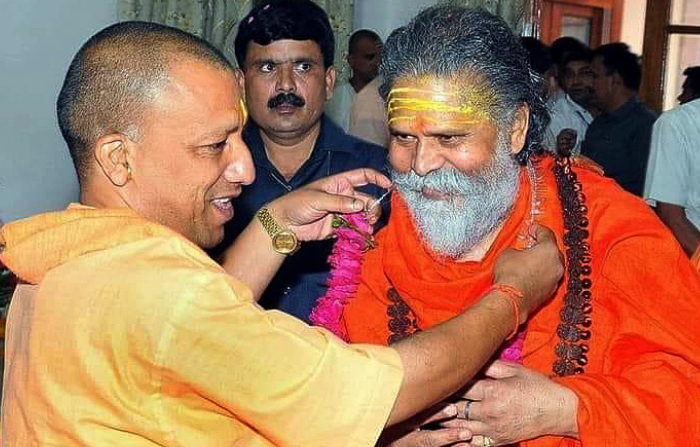 The police said a seven-page ‘suicide note’ was found in which the mahant held his disciple and yoga guru Anand Giri, besides two others, responsible for his death. UP director general of police Mukul Goel said the note will be sent for forensic analysis.

Sources in the police also said a team of UP Police was sent to Haridwar in the neighbouring state of Uttarakhand where Giri was detained. He was arrested on Tuesday (21) after a first information report was filed against him under Section 306 of the Indian Penal Code (abetment to suicide) on the basis of a complaint filed by another disciple of the deceased mahant, Amar Giri Pawan Maharaj. A special investigation team has also been formed.

India’s Times Now news channel reported the same day that Giri was allegedly being blackmailed by some people using a CD, adding more twist to the death case.
On Monday, around 5.20 pm local time, one of mahant’s followers called the cops and informed that he had hung himself from the ceiling fan in his room at the math, where he lived. The disciple told the police that they brought the body down by cutting the rope.

Giri took over as the chief of the ABAP in 2016. It was during his tenure that the body released a list of allegedly “fake saints”. In 2019, he was elected as the chief of the parishad for the second time. In April this year, he tested Covid-19 positive.

The late seer was reportedly involved in a public spat with Anand Giri with both accusing each other of, among other things, misappropriating funds.
In a statement to the media, Anand Giri denied having any misunderstanding with the mahant and called the latter’s death a conspiracy hatched by those who had allegedly misappropriated the math’s money.

The mahant was vocal on various political and religious issues in his life time. Last year, a meeting of the parishad chaired by Giri passed a resolution saying they would initiate a campaign on the lines of Ram Janmabhoomi movement to “free the Hindu temples” in places like Varanasi and Mathura. This happened a year after the Supreme Court of India gave its verdict in the Ayodhya temple title suit.

Giri also demanded the inclusion of the parishad in the Ram Janmabhoomi Trust.

“The president of Akhara Parishad Shri Narendra Giri Ji`s entire life was devoted to the promotion, upliftment and human service of spirituality and religion. We have lost a resplendent constellation of Sanatan culture due to his demise. I pray to God to give place to the departed soul in his feet. Om Shanti,” Shah said in a tweet.

Adityanath, who himself is a Hindu monk, called mahant’s death “an irreparable loss for the spiritual world” and added that several pieces of evidence have been collected in connection to the incident and the culprit will not be spared.

Yadav said in a tweet in Hindi,“The president of the Akhara Parishad, the great saint Narendra Giri, who devoted his life to religion, spirituality, died under suspicious circumstances, heart breaking. The government should bring the truth to the fore by investigating the entire incident under the supervision of the sitting judges of the High Court.”