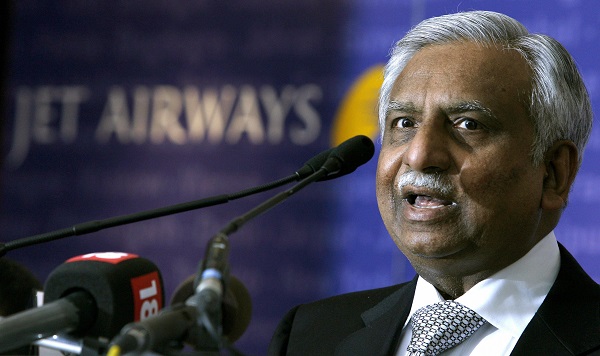 According to agency sources, the businessman's empire had 19 privately-held companies, five of which were registered abroad. The agency is probing charges that these firms allegedly carried out "doubtful" transactions under the guise of selling, distribution and operating expenses (Photo: BENOIT DOPPAGNE/AFP/Getty Images).

JET AIRWAYS founder Naresh Goyal was on Friday (6) questioned in Mumbai by the Enforcement Directorate (ED) in a case of an alleged contravention of the foreign exchange law, officials said.

This is the first time that the central agency is grilling him after it conducted searches against him last month.

Goyal’s statement has been recorded under the Foreign Exchange Management Act (FEMA) at the agency’s zonal office here, they said.

A dozen premises, including Goyal’s Mumbai residence in Mumbai, his group companies, their directors and offices of Jet Airways, were searched by the ED on August 23.

According to agency sources, the businessman’s empire had 19 privately-held companies, five of which were registered abroad.

The agency is probing charges that these firms allegedly carried out “doubtful” transactions under the guise of selling, distribution and operating expenses.

The ED suspects that expenses at these companies were allegedly booked at fake and high costs and as a result, they “projected” huge losses.

Alleged shady aircraft lease transactions with non-existent offshore entities are also under the ED scanner and it is suspected that Jet Airways made payments for lease rental to “ghost firms”, which purportedly routed the ill-gotten money in Goyal’s companies.

Officials said while the case, at present, is being investigated under the civil proceedings of the FEMA law, additional evidences may lead to the registration of a case against the businessman and others under the stringent Prevention of Money Laundering Act (PMLA).

Goyal, along with his wife, were barred from flying out to a foreign location from the Mumbai airport in May as part of the vigil mounted against him by probe agencies.

A particular company under the ED scanner is the Isle of Man-based Tail Winds Corporation and it is suspected that it controlled all activities of Jet Airways.

The ED, as part of the searches few weeks ago, also went to the premises of Hasmukh Deepchand Gardi, who was a partner and a big investor in the Tail Winds company.

Sources said Gardi, who is based in Dubai, also had a mention in the global offshore holdings list, known as the “Panama Papers”, and the agency suspected that the money invested in Tail Winds was sourced through illegal means.

It is understood that the ED is also looking at the airline’s stake in Jet Privilege Pvt Ltd (JPPL), set up in 2012.

Jet Airways has a 49.9-per cent stake in JPPL, which is part of the Etihad Group. A few executives of the now-closed down airline have been questioned by the ED in the past in relation to these charges.

A full-service carrier, Jet Airways shut its operations on April 17 after running out of cash.

A ministry of corporate affairs (MCA) inspection report had found large-scale irregularities, including diversion of funds, at the airline, sources had said in July.

In March, Goyal stepped down as the chairman of Jet Airways.

Currently, the airline is going through the resolution process under the Insolvency and Bankruptcy Code.