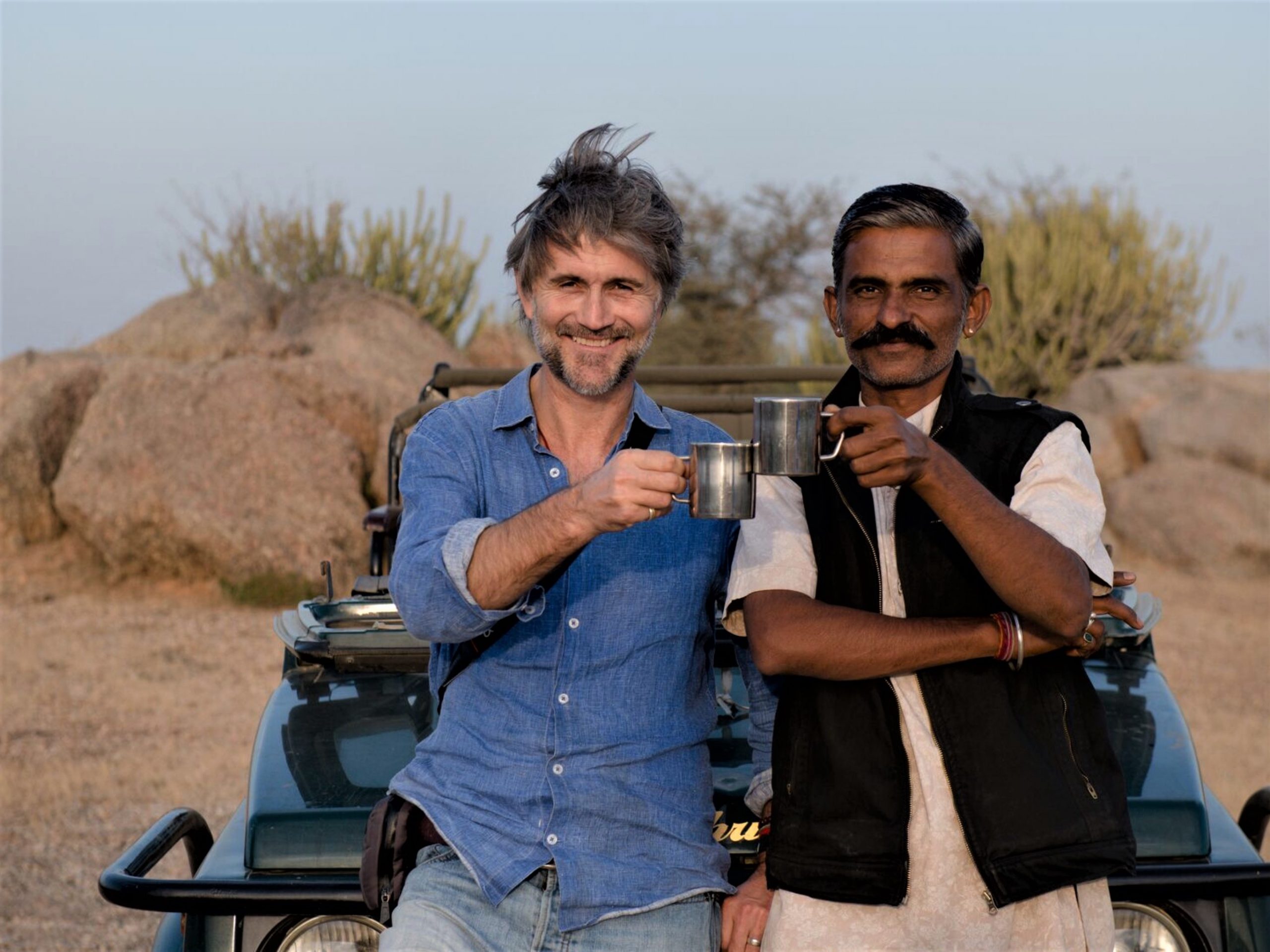 Marcus Hodge (left) with a local guide in Jawai, near Udaipur, Rajasthan.
Follow Us

THE English artist Marcus Hodge, who is holding an exhibition of his Indian paintings at the Osborne Studio Gallery in London’s Belgravia next month, has revealed how India has profoundly influenced his own life and that of several generations of his family.

The forthcoming exhibition will feature mainly “representational” images of horses and cattle, many from the Pushkar Festival in Rajasthan which he has visited five times since his first visit to India 20 years ago.

Pushkar, he said, was like “a film set from Steven Spielberg. Thousands of people appear in the desert, bringing with them cattle, camels, horses, and set up a sea of tents. But you also witness tender scenes where the animals are right at the centre of the family.”

But in order to get to the deeper truth about India, Hodge said he is going increasingly into abstract painting.

He has done Tantric paintings as well as images such as Eternal Flame from the burning ghats in Varanasi.

Hodge lives and works in the quiet Oxfordshire village of Appleton. But much of his inspiration comes from India, where his maternal great-grandparents – Alan Eden Eadon and Letitia Muriel Eadon (“known to all as Tish”) – and grandparents, Tony Pigou and Joyce Pigou – spent a good part of their lives.

He told Eastern Eye: “I’m sitting in the conservatory looking out of the window. I can see my studio surrounded by prayer flags from Dharamshala. I can sit in the studio and start painting something from India. You just get lost in it.

“I’m a great believer in what Ernest Hemingway said,” quipped Hodge. “He said he was always able to write about Paris, but when he was in Barcelona, and he could write about Madrid when he was in Paris, because you need that distance of both geography and have time to absorb the experience and digest it.”

He was in the Himalayas in Mcleod Ganj, where the Dalai Lama lives in the hill station above Dharamshala, when the pandemic struck at the beginning of 2020. He returned to England and has not been able to go to India since.

Setting out his family’s deep connection with India, Hodge said: “My greatgrandfather, Alan Eden Eadon, was born in England, but went out at a very early age with the Civil Aviation Authority. He lived out there with his wife Tish for a lot of his life and built airfields.

“Their daughter, Joyce Eadon, my grandmother, became Joyce Pigou, when she married my grandfather, Tony Pigou. He was in the navy, but would take out a Tiger Moth at weekends and fly all over the country. Two of my uncles were born in Calcutta (now Kolkata).”

As a small boy, Hodge (who was born in 1966), learned about India from his grandparents after they returned to England. “We often had curries instead of traditional English food. And as a very young boy, I was told stories in my grandmother’s bed. She didn’t read me books, she used to tell me tales of their lives in India. Gosh, it just captured and coloured my imagination tremendously.

“Eventually when I went out to India for the first time 20 years ago, I was desperate to experience what I’d heard so much about first-hand.”

He has embarked on “a very interesting journey because at the moment, I’m deep in Shashi Tharoor’s critical book, Inglorious Empire: What the British Did to India”.

Hodge “wholeheartedly agrees” with the author and politician that the history of the Raj should be taught in schools.

He is also delving into family history, contained in old family albums. He has sorted out some pictures for a book about his great-grandfather being published by a museum.

Hodge supports a charity for orphaned or abandoned girls, Sheela Bal Bhavan, in Jaipur in Rajasthan, with a smaller offshoot in Nainital, a former British hill station in Uttarakhand. One of the girls, who arrived when she was six, is “28 now, a wonderful young woman and she calls me ‘Dad’,” he revealed.

The home in Nainital was set up initially to look after three babies. “A couple of years ago I opened a book and there was a picture of my grandmother on the first page by the lake in Nainital. Now isn’t that strange? It feels like something has gone full circle. There’s a deeply emotional connection.”

He was in Mumbai one year painting the Gateway of India, which was erected in December 1911 to celebrate the arrival of George V and Empress Mary.

Looking down at his representational drawing he sensed that “this isn’t good enough. I sat for days and pondered this. Of course, the context was the connection between Great Britain and India. Representations seemed like a rather paltry way to approach such an enormous and abstract subject matter.”

On his penultimate trip – he has been to India 14 times – he witnessed cremations on the banks of the Ganges in Varanasi.

“I think here in the west, we’re terribly bad at dealing with death and the end of life in the spiritual context.” In Paris, he discovered 17th-century Tantric Rajasthani paintings which were “used as an aid to meditation and prayer.

“I was blown away by these images.The experience of doing abstracts “reignited my interest in painting, actually, if I’m honest, because I was suddenly getting to a point in my life where I’d been doing it for a long time, and needed something new.”

But he hasn’t given up representational painting. In any case, he wants to catch India before all that he has known changes for ever. “The visual world out in India is so tantalisingly interesting and beautiful and strange that you’re always wanting to set it down, oil on canvas, or in drawings. And I love that.”