Holocaust memorial will reflect ‘the lows that humanity can sink to’ 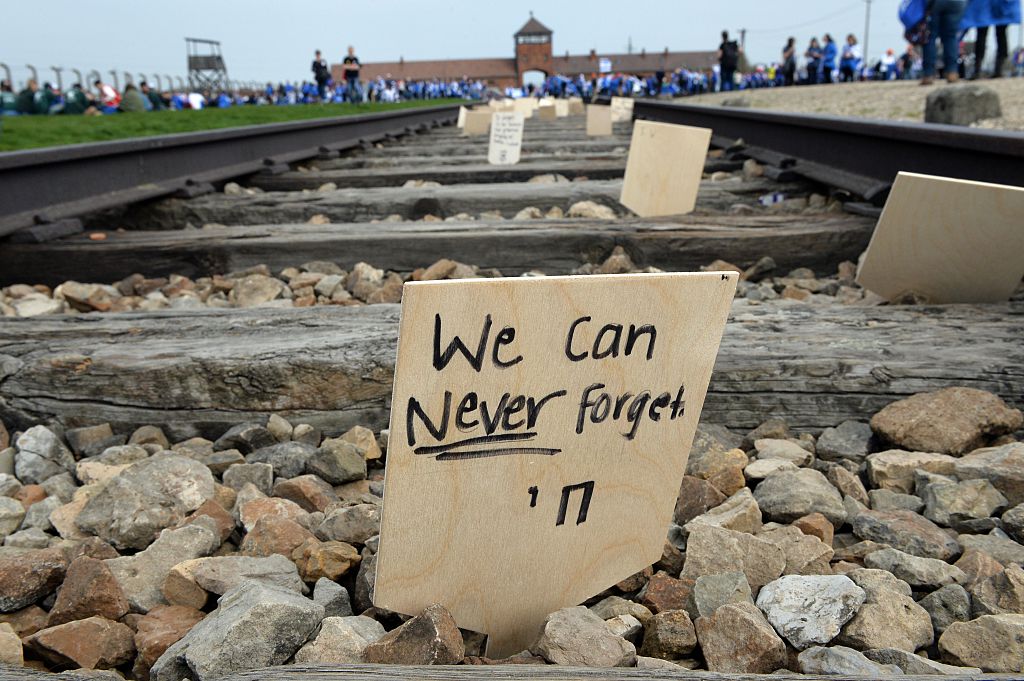 A sign is seen on the tracks at the former Nazi German Auschwitz-Birkenau death camp (Photo: JANEK SKARZYNSKI/AFP/Getty Images)

EARLIER this month [on October 2], we marked the 150th anniversary of Mahatma Gandhi’s birth.

One of the interesting things about the Mahatma was the special connection he had with the Jewish community. He had a number of Jewish friends from the two decades he spent in South Africa (1893–1914). For example, he had a long-lasting friendship with Hermann Kallenbach, a doctor, as well as Henry and Millie Polak, an English Jewish couple living in South Africa.

When Jews were being persecuted in Europe in the 1930s and there was a refugee crisis, Gandhi even suggested that they come to India (there was already a small, successful and well-integrated Jewish community in India, but that is a different story). The British government denied this request, although it did allow in 10,000 Jewish children from Nazi-
controlled Europe on the eve of the Holocaust in the late 1930s, the so-called Kindertransport.

A decade later, the partition of India in 1947 led to brutality and the murder of millions, as well as the displacement of an estimated 15 million people. Many Asian families in the UK today were affected by this. They understand that the history of this period is still relevant today.

In a similar vein, 70 years on, the Holocaust, the systematic killing of six million Jews and
other minorities, remains as relevant as ever. Unfortunately anti-Semitism and other
forms of hatred are on the rise. After the Holocaust, people said ‘never again’, but we have
not lived up to this promise. Hatred, scape-goating and persecution have flourished in
too many places.

In a few weeks’ time, a planning committee chaired by Westminster councillor Gotz Mohindra will meet to decide the fate of the proposed Holocaust memorial and Learning Centre in Victoria Tower Gardens. It has received support from the UK government, London mayor Sadiq Khan, senior faith leaders including the Archbishop of Canterbury and the chief rabbi, as well as other community groups.

However, some local residents are opposed to the plans, and there is opposition from other
sources, including minority figures in the Jewish community.

The proposed memorial and Learning Centre have been designed to be consistent
with the local environment and will only take up seven per cent of the park. It’s a really important project, and we urge readers to give it their support. It will use the template of the Holocaust to also tell the story of other genocides, such as in Cambodia, Bosnia and Rwanda. It will convey to the thousands of schoolchildren who visit the lows humanity can sink to, the dangers of scapegoating “the other” and that we must always be vigilant
against racism and prejudice of all sorts. It will inculcate positive British values of tolerance and respecting the other.


The Asian community (like the Jewish community) is proud to be British, but is also aware
of what it feels like to be on the receiving end of racism on the streets.

The Holocaust was an indelible stain on humanity. It was not a British crime, but its
lessons are for everyone, and will help educate generations of British schoolchildren.

Kartik Aaryan finishes his next Dhamaka in just 10 days