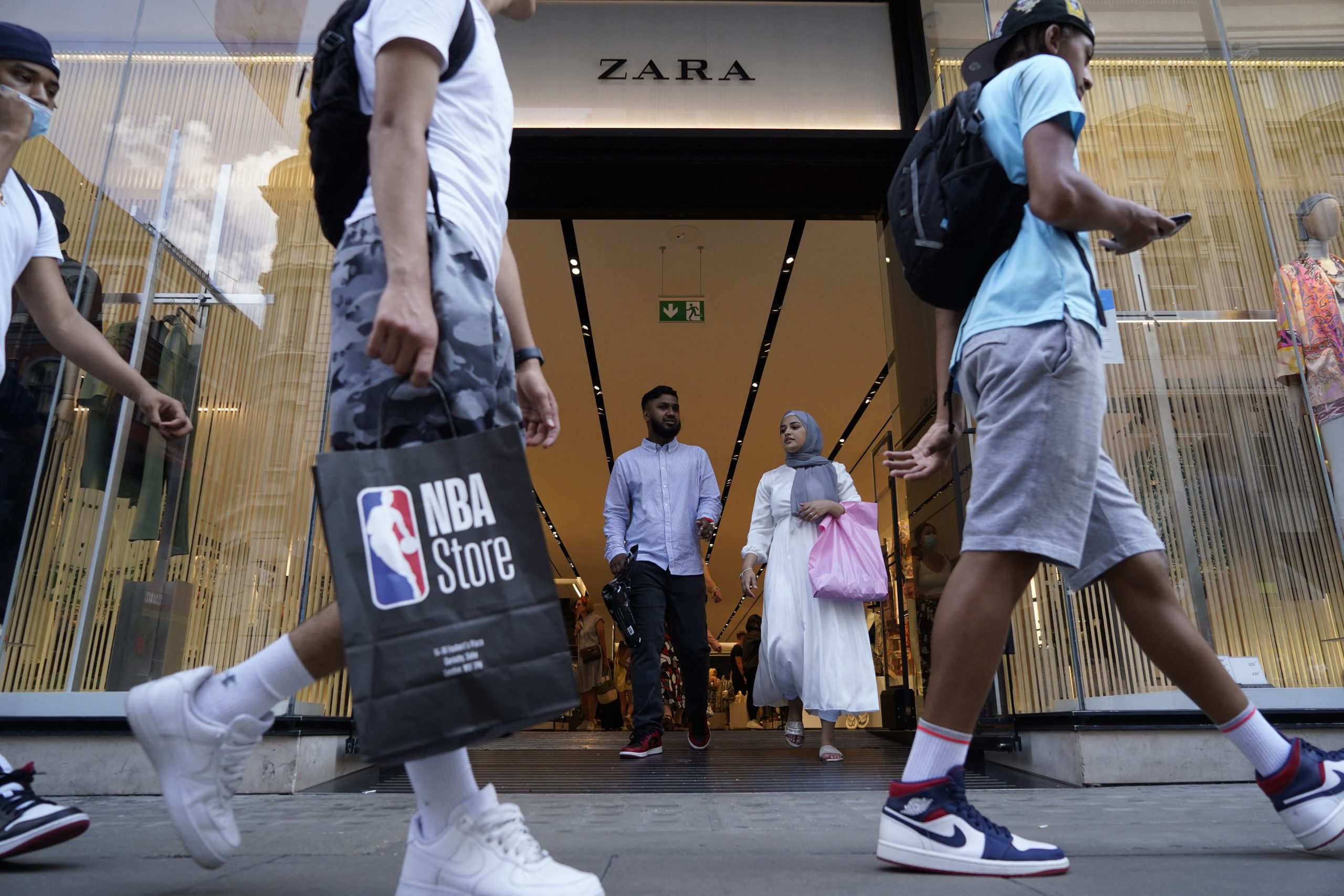 NEW RULES: Experts are urging people to use common sense in keeping themselves and others safe (Photo by NIKLAS HALLE’N/AFP via Getty Images)

HEALTHCARE workers, pharmacists, faith leaders, restaurateurs and retailers have expressed concern over rising Covid-19 infection rates, as experts predicted the UK will soon have more new cases each day than it did at the height of a second wave of the pandemic earlier this year.

Laws requiring masks to be worn in shops and other indoor settings, along with capacity limits in bars and restaurants, were lifted on Monday (19), which some had described as Freedom Day.

On Monday, data confirmed there were 39,538 new coronavirus cases.

Prime minister Boris Johnson – who is self-isolating after health secretary Sajid Javid tested positive last weekend – has defended the move to lift all restrictions, but urged people to be prudent.

Ministers said thanks to a rapid vaccination programme, the risks to the healthcare
system are manageable. Around 70 per cent of adults in Britain are fully inoculated, but the vaccine roll-out has slowed in recent weeks, with younger people more hesitant to take the jab.

Cases are hitting levels not seen since the winter, although deaths and hospitalisations remain relatively low. Vaccine minister Nadhim Zahawi warned that “these numbers will get worse before they get better”.

Dr Waheed Arian, an NHS emergency doctor in northern England, has been working on the frontline for the past 18 months and has witnessed the devastating impact of the virus.

He told Eastern Eye he was anxious about the prospect of the health service becoming overwhelmed once more. “Personally, I’m very upset about (Freedom
Day) because we have sacrificed a lot and have worked extremely hard to get to
this stage,” he said. “The NHS is already operating at maximum capacity and then to be overwhelmed by more cases coming in… that’s a thought we really don’t want to be considering.”

Dr Farzana Hussain runs her own practice, The Project Surgery, in Newham, east
London. Although vaccinated patients are less likely to require hospital treatment, Hussain has seen a large increase in those seeking advice from their GPs.

“That’s an extra workload on top of the people who haven’t managed to see us during lockdown,” she told Eastern Eye, noting there was a 25 per cent increase of patients wanting to see their GP after the end of the lockdown earlier this year. “We’re very concerned about how we’re going to manage (the workload),” she said.

A number of pharmacists also voiced concerns that they would also be overwhelmed with patients who needed help.

Yasmine Haq, a pharmacist at Knights Pharmacy, told Eastern Eye, “The impact now on the workload of pharmacists will only increase due to the mismatched responses from the public. “Along with more services opening up and patients venturing out more, it’ll only amplify the demand on community pharmacy.”

Graham Phillips, the director pharmacist of Manor Pharmacy, agreed that the pressure will fall onto pharmacists. “I can’t tell you how many clients who have come in and said, ‘I need my blood pressure checked but my GP can’t do it, because of Covid but he says that (pharmacists) will’,” Phillips told Eastern Eye. “Why is it ok to send all those clients to the pharmacy?”

Sachin Shah, a superintendent pharmacist at Jackmans Pharmacy, Hertfordshire, said he believes it is “too early” to be celebrating Freedom Day, as Covid cases are still on the rise.

Amish Patel, director of the Hodgson Pharmacy in Dartford, said the percentage of patients who suffer from long Covid was a concern, too. “I remember reading one article which suggested that 10 per cent of people get long Covid,” he told Eastern Eye. “If the cases are going to continue rising, that’s going to impact pharmacy with people seeking advice, wanting to know what to do, what can they expect with symptoms? How can they help the symptoms? Is anything they can do to aid recovery? And these are all questions we don’t have a lot of answers to.”

“We have a duty to protect others”

Dr Arian, who recently released his memoir In the Wars, believes there needs to be a compromise on the easing of regulations. “I do understand there are a lot of people suffering from a loss of income, but it’s not an argument of all or none, which is what Freedom Day implies,” he said. “A compromise should have been made based on data and what the scientists are saying. It doesn’t take a lot to follow social distancing guidelines or wear a mask.”

Dr Chintal Patel, an NHS GP based in London, believes people have a responsibility to protect others who are vulnerable to the virus. “When we can’t distance in an indoor setting, I think we should be wearing masks, especially with cases rising and with the delta variant being so easily transmissible,” she told Eastern Eye. “It’s just a really easy way of reducing the transmission.”

At her GP surgery, staff are still required to wear masks, but do not have to use full PPE (personal protective equipment) such as aprons and gloves. However, Patel has decided she will still wear the full kit.

Although Hussain acknowledged people cannot be “kept in lockdown forever”, she is still nervous about the rise in Covid cases. “Now that mask wearing isn’t compulsory and social distancing has gone, that will mean infections will be rife,” she explained. “Just because it is Freedom Day, that does not mean the virus is going to stop spreading.”

Haq also noted many businesses were keeping some regulations in place to protect customers and patients from Covid, but some people were not following the rules.

“The challenges I’ve came across are patients not respecting one another and the continuity of still being expected to wear a mask even though restrictions are being lifted,” Haq said. “People aren’t being mindful of others.”

‘Freedom Day’ has coincided with the festival of Eid al-Adha in the UK. In light of rising cases, faith leaders have recommended Muslims remain vigilant while celebrating with loved ones.

Mahmood Rafiq is the head of external relations for the Ahmadiyya Muslim Community UK, which runs approximately 150 mosques and Islamic centres across the UK. Despite the easing of restrictions, Rafiq said the group will continue to follow measures to ensure their members remain safe.

“We’re still enforcing social distancing, face masks and less than 50 per cent capacity in our mosques,” he told Eastern Eye. “As you can imagine, Eid is a very big celebration and mosques literally overflow, so we are ensuring we’re limiting numbers. We’re encouraging members to pray at home because it’s safer.”
Rafiq admitted there was still some concern about the safety of followers from the BAME community, especially elders.

“Sadly, during this pandemic, a number of families have lost loved ones to Covid,” he said. “It’s still raw for us, so it’s not as straightforward as everything going back to normal again. We still have to be cautious.”

Other mosques have decided not to organise mass gatherings to celebrate Eid.
The Green Lane Masjid & Community Centre (GLMCC) in Birmingham confirmed that its annual Celebrate Eid event would be cancelled. Officials said the event, which attracts an annual attendance of up to 60,000 people, could pose significant risks due to rising Covid-19 infections.

Instead, Eid prayers will be held indoors at the masjid and at the Colts Ground situated within the Edgbaston stadium compound.

Qari Asim, a senior Imam at Makkah Mosque in Leeds, said people must remain cautious during Eid, due to rising Covid infection rates across the country.
“I am confident that the Muslim community here in the UK will still be able to have a festive time with their families, while exercising caution as Covid is still present among us,” he said.

It is not only places of worship which are preparing for Eid. Ishfaq Farooq, operations director of British Asian restaurant MyLahore, said they were expecting to see a higher number of Muslim customers at their venues too.

“As a business, we don’t feel everything has eased off,” Farooq told Eastern Eye. “With Eid coming up, it’s going to be extremely busy especially as people had to celebrate at home last year. Everyone will be going out to celebrate, and how do you control that?”

“People are still scared of Covid”

Although it is not mandatory for customers to wear masks at their restaurants (in Bradford, London, Leeds and Manchester and Birmingham), Farooq said the business was still recommending people adhere to Covid safety rules. However, he believes most people will still be feeling cautious.

“People are still quite conscious about safety and are reluctant in terms of going out and sharing tables,” he said.

Some retailers have also found customers are keen to keep adhering to social distancing rules.

Pritina Patel, from Nisa Local in Birmingham, has altered the store’s signage and posters to inform people they do not need to wear masks inside. However, she has found most customers are still wearing masks and maintaining social distancing.

“(Customers) are still scared,” Pritina told Eastern Eye. “They don’t want to stick to the government guidelines which are ‘ever-changing’ and are rather using their common sense to keep themselves safe. Numbers are again rising, and customers don’t want to take any chances.”

Amrit Maan, from Maan News in Birmingham, and Pete Patel, from Costcutter in Brockley, have had similar experiences. “Masks are very much in place, and everyone is still wearing them,” Maan said. “We did not instruct anyone to wear it or not to wear it on Freedom Day, but almost every customer was already wearing the mask and maintaining distance.”

Pete added: “Posters and signages are still up outside the store asking the customers to wear masks, but people are maintaining the older norms anyway and are not walking-in without masks.”

Chris Taylor, from Taylors of Tickhills in Doncaster, said he will still wear his mask inside the store to create a safe environment for customers – and will be encouraging them to do the same. He told Eastern Eye: “I have not yet met anyone reluctant to wear masks or follow distancing norms after Freedom Day.”

Recent statistics show 87 per cent of Britain’s adult population has had one vaccination dose, and more than 68 per cent have had the two doses which provide fuller protection against the virus.

Daily deaths, currently at around 40 per day, are just a fraction of a peak of above 1,800 seen in January.

“We are against opening up without any precautions in place,” Ashworth told BBC television, attacking the government’s plan on masks, in particular.

Professor Neil Ferguson from Imperial College London warned that Britain was on course for 100,000 cases a day, as the delta variant spreads out of control. “The real question is, do we get to double that or even higher?” he told the BBC. “We could get to 2,000 hospitalisations a day, 200,000 cases a day, but it’s much less certain,” he said.

Scotland and Wales, whose devolved governments set their own health policy, said they would maintain the mandate on face coverings among other restrictions, despite England’s moves to lift the measures.

(With additional reporting by Swati Rana and Pooja Shrivastava)