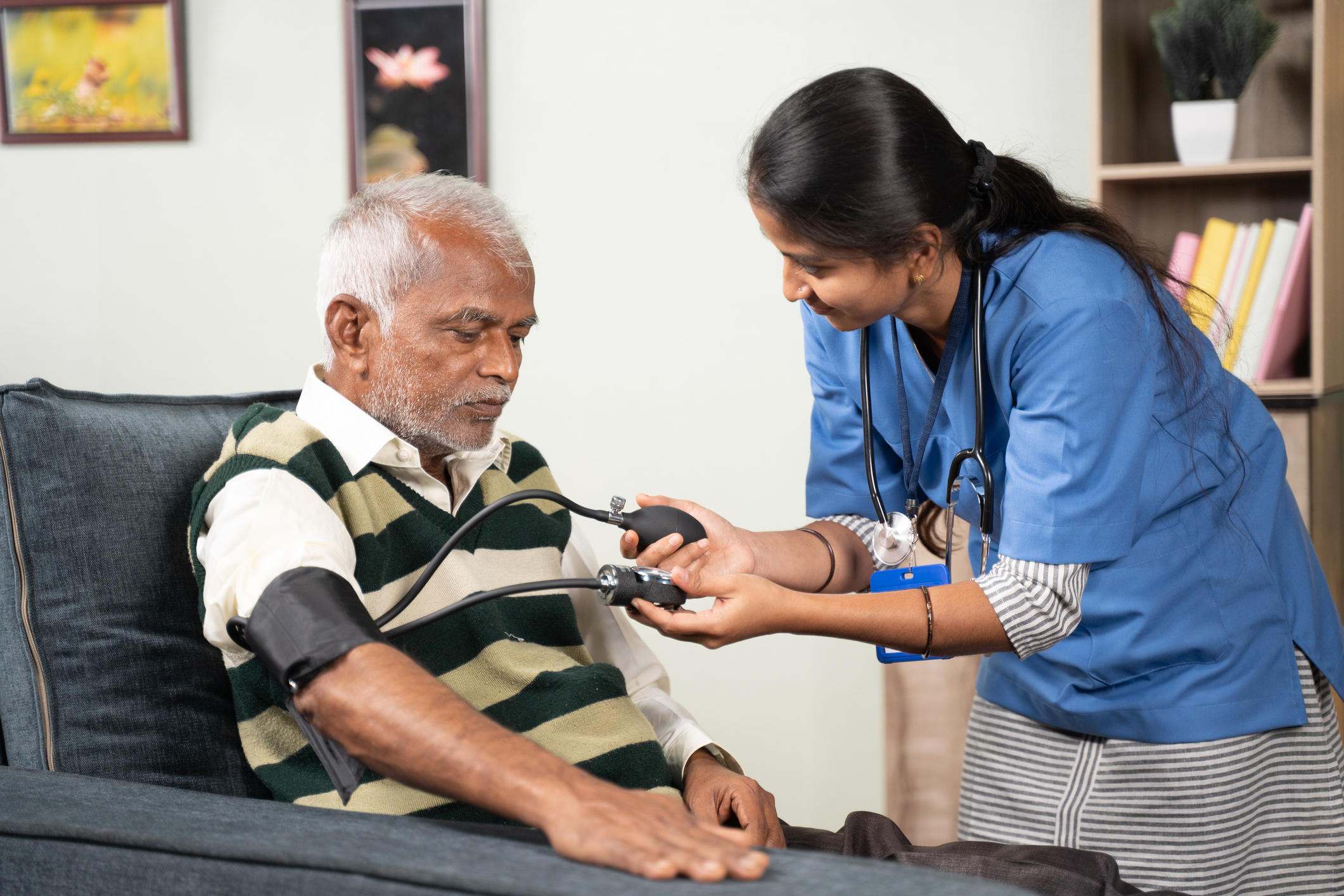 Doctors’ leaders and hospital chiefs want ministers to widen their investigation into health disparities among south Asian and black communities.

The leader of the British Medical Association (BMA) and a senior health authority boss have told Eastern Eye that Sajid Javid’s investigation into racial inequalities should be the start of a broader investigation into why ethnic minorities are more likely to die from some illnesses and diseases than white people.

Over the weekend (21) the health secretary ordered a review into whether some medical devices are fit-for-purpose when it comes to a patient’s ethnicity.

He cited research which suggests that oximeters, which measure the level of oxygen in blood by clipping the device to a finger, may show incorrect readings when it comes to south Asian and black patients because of their darker skin colour.

“I’m very pleased that the secretary of state has announced a review,” said the BMA chair, Dr Chaand Nagpaul.

“What this highlights is that the research that goes into devices is not ethnically diverse.

“It was clear that the pulse oximeters that he was mentioning, were designed on a white population, and the real concern is that it has overestimated the oxygen saturation levels in people with darker skin, meaning that clinical decisions were based on inaccurate readings.

“What this really begs is that, at the onset, when we see technology being developed for the medical profession.

“At the onset, when drugs are developed, we need to make sure that the researchers do their work on a diverse population.”

Writing in The Sunday Times the health secretary said, “Because although we’ve come together as a nation to fight this virus, the pandemic has shown that in many areas we’re far apart.

“At the height of the Covid peak last winter, black, Asian and other minority ethnic groups made up 28 per cent of critical-care admissions in England, about double their representation in the population as a whole.

“I spoke about the Office for Health Improvement and Disparities, an organisation that was launched last month and has so much potential to tackle these injustices.

“I want to fix these disparities wherever I find them.”

Speaking on the BBC’s Andrew Marr programme (21), Javid indicated that the oximeters could have caused unnecessary deaths during the pandemic.

“Data that we’ve seen so far tells us there has been significant underestimate in terms of what we call hypoxia in individuals with darker skin.

“We’d like to look into that further to see has it really affected outcomes.

“Our evidence tells us that it has, and that’s why I think it is absolutely right for the secretary of state to commission, the review.

“As a clinician, we trust the equipment that we get, we trust that it’s robust, and when it’s kite marked.

“What this has told us is that actually, maybe we need to look at equipment in a bit more detail, put it through a very rigid quality and equality impact assessment.”

Patel is also the chair of the South Asian Health Foundation, a charity set up in 1999 to improve medical treatment for the different communities.

“Of course, it’s never enough, but I think whatever contribution there is, is fantastic,” he said.

“It’s great to see this intervention, which is based upon evidence that’s emerged with pulse oximetry. Again, could we do more? The obvious answer is yes.

“Covid specifically, has driven inequalities, which are multifactorial, so we know that there’s been an increased exposure for certain ethnic groups.

“We know that vaccination uptake varies across different ethnic groups, but likewise, if there are diagnostic elements of disparities, then we need to know about them, so we can rectify them.”

He warned that “some categories of commonly used drugs for blood pressure that do not work effectively in some ethnic groups”, and equipment should not be approached as a one-size-fits-all.

“We know that even during the Covid pandemic, the safest masks, which require a tight seal on the face, were really designed for Caucasian faces.

“Many Asian doctors found that they weren’t fitting securely enough, and in the height of the first peak, many were being asked to still go into work without properly fitted masks.

“That’s because they weren’t designed with diversity in mind.”

So, it is not just equipment which needs investigating, according to Dr Chaand Nagpaul.

He wants a root and branch look at how doctors are trained.

“We are trained very much with the white skin in mind, when you look at most dermatology resources, textbooks, etc.

“Given we have a population with so much ethnic diversity, clearly we do need to do something about medical education as well.

After immense pressure and delays, the government published its review into disparities caused by Covid in June 2020.

The review recommended changes to ensure that non-white patients were not disadvantaged when it came to health and social care.

In its last report [May 2021] updating what progress it has made, the government wrote, “The main focus of engagement work over the last [sic] three months has also been on promoting vaccine uptake among ethnic minorities.

“This has included high-profile ministerial visits to pop-up vaccination centres in places of worship, hosting roundtables with faith groups, medical professionals and community leaders to consider how to increase vaccine uptake and other speaking engagements.

“Specific work is also being undertaken to address fertility concerns among women, especially from ethnic minorities, including a series of videos with midwives, health visitors and expectant mothers on the benefits of vaccination.”

Eastern Eye has reported several times in the past 12 months how vaccine take up continues to be stubbornly lower compared to white uptake, despite initiatives by the former vaccines minister, Nadhim Zahawi, and the current health secretary, Sajid Javid.

Patel’s hospital in Coventry made history when matron, May Parsons, administered the first injection to 90-year-old grandmother Margaret Keenan in December 2020.

“A significant factor here is vaccination,” he told Eastern Eye. “We know that vaccination uptake offers significant protection against not just infection, but also hospitalisation once infected.

“That translates into better outcomes for those who are vaccinated.

“So, of course, the more we can do to reassure the public, and in particular, the ethnic groups where there is lower uptake, the better in terms of getting good outcomes for those populations.”

When it comes to health disparities, research by the King’s Fund suggests that south Asians are disproportionately affected when it comes to infant and maternal mortality, cardiovascular disease, diabetes, and certain cancers.

“Health inequalities are essentially avoidable,” said Patel. “So, if there are avoidable things, we ought to do something about it.

“We know that health outcomes are driven not just by health service provision.

“Many factors that may lie outside the health service [such as] smoking, where people live, the kind of jobs people do, all those factors need to be looked at, but within health care as well.

“All those four things are really important when it comes to making sure that we reduce health inequality as much as possible.”

When it comes to reporting health inequalities, Eastern Eye has highlighted problems non-white doctors face when it comes to being disproportionately complained about and disciplined.

The chair of the BMA, Dr Chaand Nagpaul said, “This is an opportunity to build on what Sajid Javid said, regarding a very narrow issue of medical devices into something more broad, which is about disparities, as they affect the medical profession and for the healthcare profession more widely.

“A focus looking at the medical profession and the care provided to patients as a piece of work is long overdue.

“The way in which healthcare professionals themselves experienced disparities in the workplace, knowing that there are greater levels of bullying harassment, with doctors and nurses from an ethnic minority that there is greater chance of disciplinary action.

“Those, of course, will impact themselves on the care to patients.”

Freedom of information figures obtained by this newspaper revealed that over the past 10 years, the General Medical Council (GMC) investigated 44 per cent of complaints against Asian medics, 10 per cent higher than for white physicians.

“There’s been some research done recently on this,” said Nagpaul.

“The GMC commissioned the work that has shown that the risk of medical error in doctors who are feeling burnt out increases by about 60 to 80 per cent.

“Many ethnic minority doctors are experiencing poor levels of mental health because they feel unfairly treated in their workplaces.

“Many of them are suffering with depression, many of them being bullied, harassed.

“We also know that research has shown that for doctors, even being treated poorly, like just being treated with rudeness can in fact, impair your cognitive ability by 60 per cent.

“So, actually having a health service where healthcare professionals have a positive experience of being treated fairly, being motivated, is also about patient safety.”