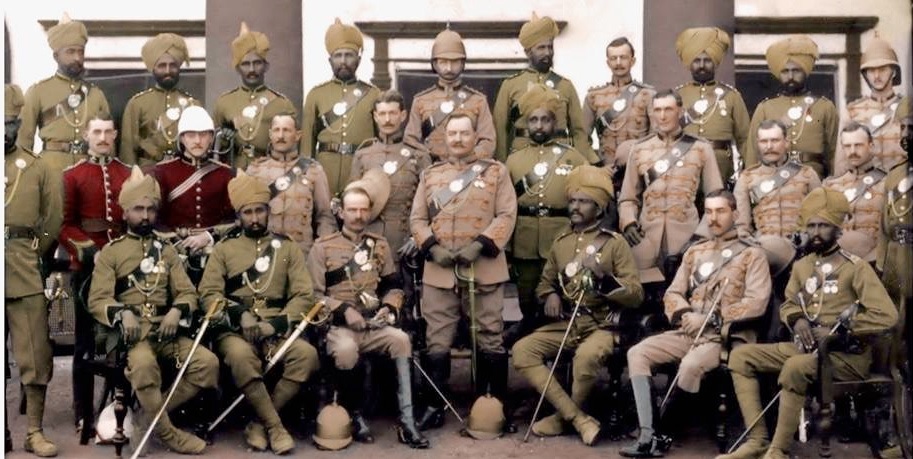 Soldiers in the 33rd Punjab Regiment, with Subedar Mohammad Khan (standing back row, fifth from the right).
Follow Us

GROWING up in the Meadows area of Notting­ham, we were told stories about our grandfathers and great-grandfathers.

I was aware they were soldiers and had descend­ed from a celebrated military village.

My parents arrived in the UK from Pakistan in the early 1960s. My father Mumtaz (now 85), worked at the Royal Electrical and Mechanical Engi­neers (REME) workshop at Old Dalby, Melton Mowbray, for more than 30 years, while my mother Sadiqa was a seamstress.

In 2014, I started to research my family history and find out more about where they lived. I was fortunate enough to be in touch with my historian uncle in Pakistan, Riaz Malik, who was able to pro­vide me with many relevant photographs and a family tree from his archives.

My ancestral village is called Dulmial, located in the Salt Range region of Punjab, 100 miles south of Islamabad, the capital of Pakistan.

Dulmial is a small dusty village nestling in the foothills of the Himalayas. The nearest town is Chakwal. Katas Raj, an ancient site of Buddhist and Hindu temples, is close by, while the Khewra Salt Mines, the famous source of pink Himalayan rock salt, is a short journey away.

The village is populated by the Malik Awan clan, a former ‘martial race’.

I discovered that two of my great-grandfathers, Captain Ghulam Mohammad and Subedar Mo­hammad Khan, took part in the First World War. They both travelled far and wide in military cam­paigns ranging across the Indian subcontinent. Subedar Khan was with the 33rd Punjab regiment and was invited to visit London in 1911 for the cor­onation of King George V.

My grandfathers, Captain Lal Khan and Subedar Habib Khan, were Burma Star veterans during the Second World War. They spent many years serving in the Burma campaigns, involved in the Battles of Imphal and Kohima, against the Japanese.

After Partition in 1947, they both were part of the Pakistan Army. I had met my grandfathers on a few occasions, but they had never spoken about their war experiences.

It is interesting to note that many veterans from Dulmial could read and write English, because there was a school in the neighbouring village of Dalwal, run by Belgian Capuchin Christian monks.

On visiting Dulmial several times during my childhood, I was always excited to see a majestic, shiny black cannon on display in the centre of the village, raised on a marble plinth, at the side of a small lake. However, at that age I didn’t understand the significance of its presence.

On a later visit to Dulmial in 1995, I noticed a plaque at the base of the artillery piece stating that the cannon was awarded to the village in 1925, in recognition of services rendered by all ranks during and prior to the First World War.

The well-maintained 12-pounder is of a Blome­field design. The former British Naval cannon weighs 1.7 tonnes and was made at Carron Iron­works, near Falkirk, Scotland in 1816, serial num­ber 84049. It took two weeks for the cannon to be transported by train and oxen cart from the 1st Punjab regiment base in Jhelum to Dulmial.

In the early years, the cannon was referred to as the ‘Birdwood Gun’ because Field Marshal Lord William Birdwood, commander-in-chief of India, had visited Dulmial and saluted at the cannon.

Nowadays Dulmial is also known as the ‘village with the gun’. Nearby, in a primary school, a marble plaque placed on an obelisk says, ‘From this village 460 men went to the Great War 1914-1919. Of these nine gave up their lives’.

I later discovered that this figure was a record for any south Asian village. At the time there were only 870 males in the village, in­cluding boys and the elderly. So almost every able-bodied man joined the British Indian Army, serving across the globe.

When researching information about Dulmial I spent time at the National Archives in Kew, Lon­don, and also accessed information from the La­hore Museum in Pakistan.

Over the years I have collated many published references about Dulmial, which was a surprise as it is a fairly small village in Punjab.

Not only had I found out more about my ances­tors, but I also discovered that Dulmial was punch­ing well above its weight in terms of military service during the world wars. I am immensely proud of and wish to share this history with people in Britain.

I am now a public speaker on Dulmial and the Indian subcontinent’s contribution in the First World War. These talks are usually accompanied by my travelling military museum. The audiences are often amazed at the photographs of turbaned In­dian soldiers who served around the globe. I tell people, ‘Yes, we were there too. We wish to be part of Remembrance services too.’

I have presented my research to many commu­nity and faith groups across the country. My talks were also well received at the National Memorial Arboretum in Staffordshire and the National Army Museum in London.

When I was in school, I as­sumed the world wars in­volved only white people. I had never seen a photograph or film footage of an Indian or black sol­dier. Similarly, the Remembrance services were very much based around the Christian faith.

However, over the past few years, the British Le­gion has started an inclusive campaign, called ‘Re­member Together’, which reflects the contribution of many diverse communities from across the globe.

Over the past seven years, my research of the soldiers from Dulmial village and of undivided In­dia in the First World War has highlighted many aspects of racial prejudice.

There has been a definite white-washing of the World Wars’ history. This has driven me to reach out and tell the story of the Indian and Common­wealth troops to a wider audience. My aim would be for school curriculums to include this diverse aspect of history.

Many descendants from Dulmial village have now migrated all around the world. By collating the village’s history, hopefully future generations can keep in touch with their roots.

I hope that by reflecting on our strong shared history we can improve community cohesion in our multicultural society.

Dr Irfan Malik was born in 1968 in Nottingham and qualified in medicine in 1992 at the University of Birmingham. He is now a senior GP partner at Elmswood Surgery in Sherwood, Nottingham. He has an interest in the Indian subcontinent’s contri­bution in the First World War. Dr Malik is married to Aneela and they have two grown-up children, Sajeel and Kinza.