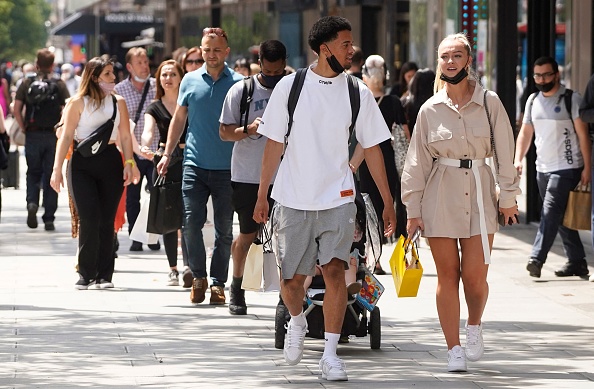 Pedestrians, some wearing face coverings due to Covid-19, walk past shops on Oxford Street in central London on June 7, 2021. (Photo by Niklas HALLE’N / AFP) (Photo by NIKLAS HALLE’N/AFP via Getty Images)

THE DELTA variant is 64 per cent more infectious than the Kent strain and twice as likely to put patients in hospital, Public Health England’s (PHE) latest data says. The revelation comes as experts continue to urge prime minister Boris Johnson to delay the June 21 unlocking, as had been planned.

PHE says that cases of the faster-spreading Delta strain are now doubling every 4.5 days in some parts of the country, and now account for 96 per cent of cases across England, effectively killing off Kent strain and becoming the dominant variant in the country.

Although two vaccine doses are almost as effective against the Delta variant as they are against the Kent variant, one dose is markedly less, offering only 33 per cent protection compared with 50 per cent, says PHE data. So far, most hospital admissions and deaths caused by the Indian variant have been in unvaccinated people.

On Thursday (10), the UK reported more than 7,000 new cases for a second day running. The UK last surpassed that figure in late February.

Association of Directors of Public Health vice-president Jim McManus told Radio 4’s Today programme the government had a “fiendishly difficult decision” to make on whether to ease restrictions further, adding that if “we invest that little bit of time to keep us going forwards, it will stop us going backwards”.

“If you get enough people infected, you will get a rise in hospitalisations,” he said.

Talking about the government’s decision on BBC Breakfast, vaccine minister Nadhim Zahawi reiterated that the government would “share the data on Monday”, adding “the virus hasn’t gone away, it will attempt to mutate.”

“The Delta variant is more infectious and more severe for those it infects. So, we have to be really careful,” he said.

Meanwhile, ministers are considering a delay of a month to give businesses “certainty” and allow more time for people to receive both the doses of vaccinations, The Times claimed in a report, adding that plans are still being discussed.

The latest government figures show that nearly 29 million people in the UK have had both doses of a vaccine accounting for 54.8 per cent of the adult population.

The government is expected to announce on Monday (14) whether it will remove the last of the restrictions a week later. The final stage of lifting restrictions will see all legal limits on social contact removed. Nightclubs will reopen while restrictions on performances, weddings and other life events will also be lifted.