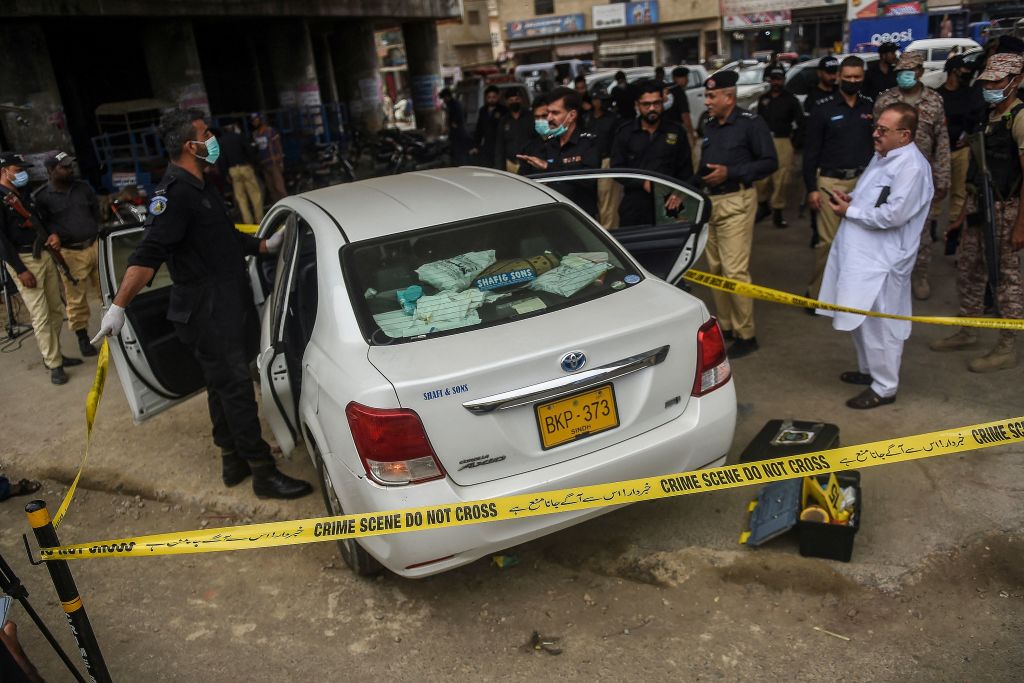 Security officials examine a vehicle that was carrying Chinese nationals in Pakistan’s port city of Karachi on July 28, 2021. At least one Chinese national was wounded in a gun attack. (Photo by RIZWAN TABASSUM/AFP via Getty Images)

A CHINESE national was wounded in a gun attack in the southern Pakistani megacity of Karachi on Wednesday (28), police said, in the latest assault targeting Chinese citizens in the country.

Local police said two masked assailants riding on a motorbike fired at a car carrying two Chinese nationals, who were working at a nearby factory in the city.

One of the passengers sustained an injury to his arm in the attack.

“He is stable as fortunately he was not hit on any vital part of his body,” Javed Akbar Riaz, the police chief of Karachi’s southern district, said.

“We have full confidence in the Pakistan side’s protection of Chinese citizens and property in Pakistan,” he told a regular news briefing.

The shooting comes just weeks after nine Chinese nationals were killed in northwest Pakistan when their bus carrying a team of engineers, surveyors and mechanical staff to a nearby dam site plunged into a ravine after a blast.

The security of Chinese workers has long been an issue of concern in Pakistan. Large numbers of them are based in the country to supervise and build infrastructure projects.

Pakistani officials offered only vague details about the nature of the explosion in the bus.

However, Beijing has been increasingly more explicit about the blast with a recent report in Chinese state media suggesting the assault was carried out by Uyghur militants or the Pakistani Taliban.

No group has claimed responsibility for the bombing.

Islamabad is Beijing’s closest regional ally, with China pouring billions of dollars into Pakistan in recent years to boost the nation’s infrastructure.

But Chinese-funded projects have sparked resentment, particularly among separatist groups, who say locals see little benefit, with most jobs going to outsiders.

In April, a suicide blast at a luxury hotel hosting the Chinese ambassador in southwest Balochistan province killed four people and wounded dozens. The ambassador was unhurt.