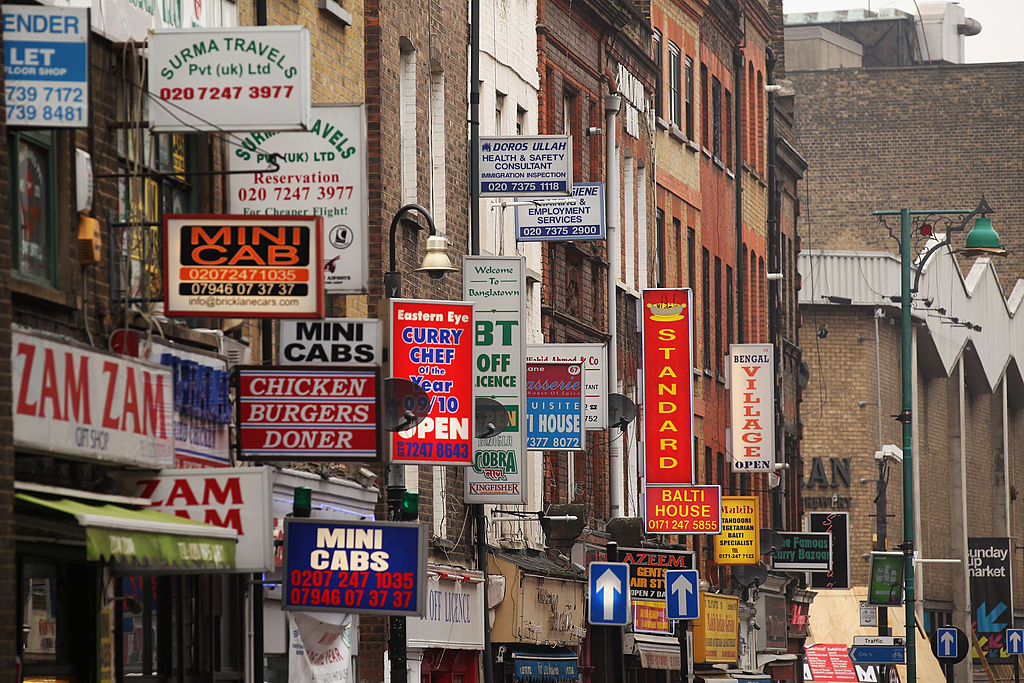 FILE PHOTO: Signs for businesses on Brick Lane, which is synonymous with curry restaurants, March 16, 2011 in London, England. (Photo by Oli Scarff/Getty Images)

IN HIS brilliant Channel 4 documentary The Curry House Kid, the celebrated dancer and choreographer, Akram Khan, meets an elderly chef in Brick Lane who came to Britain at the age of 11 with his dad, who soon passed away.

Fending for himself, he chopped onions in a restaurant for 10-12 hours a day every single day – a job he continues to perform.

Those earlier generations never called out the racism they had belted out at them while prepping, cooking, serving food as well as pints of Carlsberg which would often get regurgitated at the table and which would need clearing up.

In the 1960s and 1970s, this is what ‘going for a curry’ required largely from the Bangladeshi community who migrated here in search of a better life, with the myth of return that lower-middle-class families like mine deluded over not being an option for them.

They put up with it, bit their lips and struggled through so they could earn enough for their children to have that better life at least, even if they couldn’t.

Thankfully, these days, racial abuse in our restaurants is the exception, not the norm.

Has our third world background created a first world problem if we’re now debating whether the term curry belittles us?

I read this random outburst by a previously unknown food blogger from California – that curry was a racist term which needed to be cancelled – with incredulity, because for hundreds of thousands of people here in the UK, racism is much more real than an armchair opinion. And you can’t cancel the past.

Her remarks didn’t cause anger in me, but more curiosity as to why so many people were jumping on her bandwagon as if she was some kind of cultural thought leader.

I refrained from joining in the mainstream media circus which loves us ethnics fighting each other, especially when our jalfrezi-crazy country’s favourite  subject is concerned.

And let’s understand one fundamental thing – this is not a discussion about empire or etymology just because some 27-year-old seeking a name for themself says it is.

The call to cancel reminded me of the moment five years ago when the black comedian Chris Rock presented the Oscars as there was an outcry over the fact that there were no black nominees.

In his speech, he said: “It’s the 88th Academy Awards, which means this whole no black nominees thing has happened at least 71 other times.

“You gotta figure that it happened in the 50s, in the 60s …. I’m sure there were no black nominees some of those years.

“You know, when your grandmother’s swinging from a tree, it’s really hard to care about Best Documentary Foreign Short.”

Here’s another place whether race, class and the curry world collide and it doesn’t make for pleasant reading – with the exception of yours truly of Bangladeshi heritage who built the unashamedly superposh Cinnamon Club, in London at least, all the other high-end Indian restaurants have been created by people of Indian origin.

And unlike me, they are invariably super-posh themselves or come from elite Indian hotels which enabled them to use that privilege to quickly cash in on arrival in the UK.

There are two noble exceptions who deserve mention – the late, great Lord Gulam Noon, who made his fortune selling ready-made Indian meals to supermarkets.

He attributed his success to Bangladeshis who had popularised this cuisine for him to take it to a new level; and Lord Karan Bilimoria, with whom I created Tandoori Magazine, and whose Cobra Beer actively supports this community’s endeavours and struggles through the pandemic.

The social distancing of many high-end Indian restaurant owners and chefs from the word curry is really a call to differentiate them from the Bangladeshis off whom they capitalised to create their wonderful dining experiences – and they are truly wonderful.

It’s just such a shame that this class snobbery has spilled into a racial divide by othering those who suffered the ignominies which it suits us not to dwell on.

Let’s finally fix this and bring out the best in us; pay the tribute that’s long overdue. Let’s stop pretending that the elite of the West End’s fancy Indian restaurants popularised this cuisine and show some good grace in the process.

Iqbal Wahhab created the first ever PR company to specialise in Indian food in 1991, and in 1994, became founding editor of Tandoori Magazine. In 2001, he opened The Cinnamon Club and in 2005 the British restaurant Roast. He has left both restaurants and is currently planning new ventures.