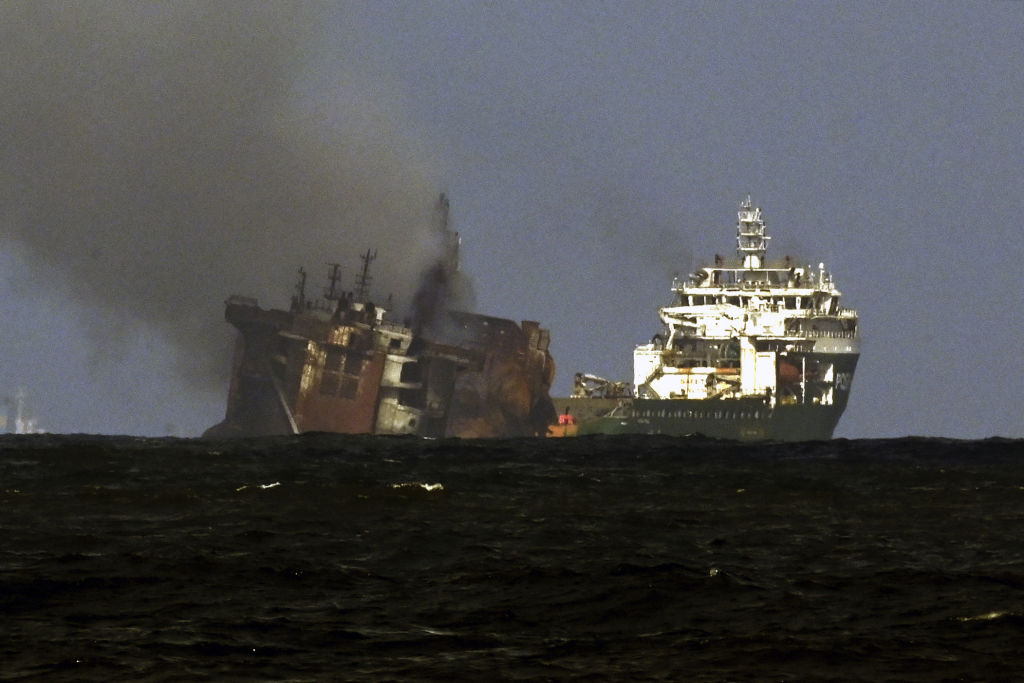 A BURNT-OUT container ship that has already caused Sri Lanka’s worst maritime environmental disaster was sinking on Wednesday (2) with several hundred tons of oil still in its fuel tanks, the navy said.

The MV X-Press Pearl, carrying hundreds of tons of chemicals and plastics, burned for 13 days within sight of the island’s coast before rescue workers finally managed to extinguish the blaze on Tuesday (1).

A huge amount of plastic debris has already inundated beaches, and authorities now fear an even greater disaster should the 278 tons of bunker oil and 50 tons of gas in the Singapore-registered ship’s fuel tanks leak into the Indian Ocean.

As tugs on Wednesday (2) began trying to tow the ship further out to sea, navy spokesperson Indika de Silva said it was slowly sinking. “The stern of the ship is under water, the water level is above the deck,” de Silva said. “The ship is going down.”

Some oil was already visible near the beaches of Negombo, about 40 km (25 miles) from Colombo, although it was not clear if it was from the stricken ship.

“The ship will be towed as further away from the coast as possible before it goes down completely,” he added.

Fisheries minister Kanchana Wijesekera tweeted that the salvage company involved in the operation “has indicated that the vessel is sinking at the current location”.

An official involved in the mitigation efforts said earlier that local experts feared the vessel was unstable. “The fire-fighting efforts also saw a lot of water sprayed onto the decks. Much of that water has settled in the stern,” the official said.

Officials had planned to pump contaminated water from the ship onto barges, but the operation has been abandoned.

The navy said an Indian coast guard vessel in the area had the equipment to deal with an oil slick if necessary.

Microplastic granules from the ship’s containers have already forced a fishing ban and prompted concern for the wildlife and environment.

Officials believe the blaze destroyed most of the nearly 1,500 containers onboard.

Marine Environment Protection Authority chief Dharshani Lahandapura said the ecological damage is still being assessed, but he believed it was the “worst ever in my lifetime”.

President Gotabaya Rajapaksa asked Australia on Monday (31) to help evaluate the ecological damage to the island, one of the most bio-diverse countries in south Asia.

Sri Lanka has launched a criminal investigation. The authorities believe that the fire was caused by a nitric acid leak which the crew apparently knew about from May 11, nine days before the blaze started.

Police said the captain and chief engineer, both Russian nationals, as well as a third officer have been questioned. A court had ordered Tuesday (2) to impound the passports of all three pending investigations.

The ship was heading to Colombo from Gujarat, India, when the blaze started, having previously visited Qatar and Dubai where the containers of 25 tons of nitric acid were loaded.