Burnley man jailed for killing doctor and her daughter 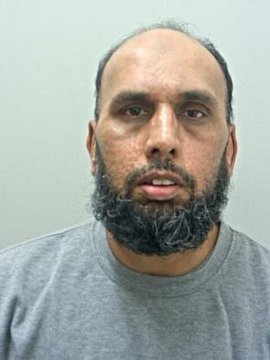 A man who murdered a doctor and her daughter has been sentenced to jail for life.

In “a brutal, shocking attack”, Shahbaz Khan drugged Dr Saman Mir Sacharvi, 49, and Vian Mangrio, 14, before killing them and setting the house on fire in Burnley in 2020.

Khan, 51, had told police that spirits, known as jinns in Islamic faith were responsible for the deaths. After pleading guilty for the murders at Preston Crown Court, he was jailed for a minimum of 34 years.

According to a report in the BBC, Judge Mr Justice Goss said the murders “were planned and determined in their execution” and “motivated by financial gain”.

The court heard Khan of Burnley drugged Dr Sacharvi and then strangled her in her home on Colne Road in Reedley on September 30, last year. Then when her daughter Vian returned from school, she too was drugged and killed before the house was set on fire to cover the tracks.

“My mum is evil” and “this is a Covid house” were written on the walls, which the prosecution said were to suggest a dispute between the two victims.

According to the post-mortem report, it was likely that Dr Sacharvi had been strangled with a ligature. While Vian’s body was so badly damaged that the pathologist could say that she died of asphyxiation.

A quantity of jewellery worth about £27,000 belonging to Dr Sacharvi was found in Khan’s loft by the police.

At the start of the trial, he had initially denied two counts of murder and one count of arson but changed his plea in between to guilty.

Khan’s wife, Rabia Shahbaz, 45, was found guilty of perverting the course of justice by giving a false alibi for her husband and jailed for 15 months, BBC has reported.

Speaking after sentencing, Det Ch Insp Pauline Stables said the mother and daughter “lost their lives in a brutal, shocking attack, killed in their own home, by someone they knew and trusted”.

Senior crown prosecutor Katie Marsden said the victims had “moved to the UK from Pakistan to further Vian’s education”.

“They relied heavily on Shahbaz Khan and Rabia Shahbaz to build their life in this country and that trust was breached in the worst way imaginable,” she added.