THIS week Bollywood queen Deepika Padukone will finally march into cinemas as a historical ruler in big budget epic Padmaavat.

The in-demand actress is central to the action of the eye-catching movie and once again expected to deliver a winning turn, which will consolidate her position at the top of the Hindi film tree.

To celebrate the crowing glory of the magnificent star, Eastern Eye went back through her life to present an all-you-need-to-know A-Z about Deepika…

A is for Aishwarya: A successful modelling career (see M) led Deepika to getting a number of film offers. She chose to make her debut in 2006 Kannada movie Aishwarya, which was a remake of Telugu drama Manmadhudu. The film was a commercial success and Deepika won acclaim in a supporting role.

B is for Badminton: Deepika is the daughter of badminton champion Prakash Padukone and initially wanted to follow in her father’s footsteps. She played competitively from a young age and rose to national level. She is still an accomplished player today.

C is for Copenhagen: Deepika was born on January 5, 1986 in Copenhagen, Denmark, to Konkani-speaking parents. The family relocated to Bangalore when Deepika was a year old and did all her schooling there growing up. She enrolled to do a degree, but later quit to pursue modelling full-time.

D is for Depression: The actress bravely spoke up about her personal experience of overcoming depression and helped open a debate on mental health in 2015. She later formed the The Live Love Laugh Foundation to raise awareness about the issue and then launched the campaign More Than Just Sad to assist general physicians in their treatment of patients suffering from depression or anxiety. She has supported a number of ventures since, raising awareness of mental health issues.

E is for England: The actress has a close connection to England, which started with a red carpet premiere of her Bollywood debut Om Shanti Om (see O). She also shot a majority of the film Cocktail in the country, which was a major turning point in her career.

F is for Feminism: The actress has been outspoken on the issue of feminism and helped introduce real girl power into Indian cinema. Deepika said playing strong female leads is a reflection of not just who she is, but a reflection of women in the world today. She said: “So it’s important for me to play characters that are relatable.”

G is for Golf: Deepika’s media-shy younger sister Anisha is an accomplished professional golf player, who has had a number of sporting triumphs. The two sisters share a very close bond with one another. Deepika said Anisha was her best friend and always honest with her: “She is always very honest about her opinion, and I don’t mind it. She is my most blunt critic and speaks her heart. Even if she is criticising me, I don’t mind it because she is very honest and wants me to do well,” said Deepika.

H is for Honours: The acclaimed actress has won a number of awards for her work. She won the most honours for her performance in comedy-drama Piku, which included a Filmfare, IIFA and Screen Best Actress award. She has also scooped other honours including a Woman Of The Year, topping sexiest women lists, and Youth Icon awards.

J is for Jeans: A style icon in her own right, the actress launched her own fashion line titled All About You. The brand reflected Deepika’s personal style, and of course had a range of jeans which proved to be popular along with other pieces that included dresses, jackets, sweaters, beautiful embroidered pieces and more.

M is for Model: Despite being socially awkward as a child, Deepika blossomed into a beautiful young lady and started a very successful modelling career when she was just 18. She did photo-shoots, television commercials and had stunning turns on the catwalk. The many triumphs during this phase of her career included winning the Model Of The Year in the Kingfisher Fashion Awards. Designer Wendell Rodricks said at that time: “Since Aishwarya Rai, we haven’t had a girl as beautiful and fresh.”

N is for No: The in-demand star has rejected a number of high-profile projects due to scheduling conflicts, including Sultan, Jab Tak Hai Jaan and Dhoom 3, which became the highest grossing Bollywood film when it released. But perhaps her biggest regret was having to say no to Hollywood blockbuster Fast & Furious 7, which clocked up over a billion dollars globally at the box office.

O is Om Shanti Om: The actress made an award-winning Bollywood debut in the musical romance opposite Shah Rukh Khan. She played a delightful double role in the Farah Khan-directed reincarnation drama set to the backdrop of the movie industry. It became the biggest grossing Hindi film of 2007. Deepika won rave reviews and became an overnight global star.

P is for Padmaavat: Deepika was first choice to play the title role of the historical epic, which had to delay its release because of political pressure. The highly-anticipated drama changed its title from Padmavati to Padmaavat and is in cinemas now. The story based around the conflict between a legendary Hindu Rajput queen and rival ruler laying siege to her kingdom in 1303 also stars Shahid Kapoor and Ranveer Singh.

Q is for Queen: The actress has risen through the ranks to become the undisputed queen of Bollywood. Today she commands the highest fees out of any of the Hindi film heroines and regularly receives high-profile film offers. The actress hasn’t changed despite her amazing rise to the top and she credits that to her family: “I think it is my family. They don’t treat me like a star at home. I am back to being their daughter when I am with them. It is the same basic lifestyle and routine. They basically keep me grounded.”

R is for Record: When action comedy Chennai Express released in 2013, it became the highest grossing Bollywood film of all-time. She has also received record-breaking amounts of money for acting projects and endorsement deals.

S is for Sanjay Leela Bhansali: The actress has become the muse of the acclaimed filmmaker and now starred in three films in a row directed by him. Like their previous two films Goliyon Ki Raasleela Ram-Leela and Bajirao Mastani, Padmaavat is expected to generate big box office numbers and get her universal acclaim. Talking of working with Bhansali, she said: “He has brought out the best in me as an actor. He has nourished and enriched me as a human being. I think our relationship today is full of trust, honesty and there is a lot of comfort that we share.”

T is for Training: The actress enrolled into the Anupam Kher academy to learn the finer nuances of acting before making her cinematic debut. Talking about her three months at the Actor’s Prepare school, she said at the time: “The classes have not only taught me the details of acting but groomed me overall and made me a more confident person.”

U is for Upcoming: The next film starring the actress is a Mumbai-set gangster drama set in the 1980s. Irrfan Khan also stars in the movie being directed by Vishal Bhardwaj. She has also received more Hollywood offers and of course is hotly in-demand with Bollywood producers.

V is for Video: An amazingly successful modelling career meant Deepika moved to Mumbai at the age of 21. She gained wider recognition after appearing in the music video of Himesh Reshammiya song Naam Hai Tera, and soon after starting receiving film offers including from Farah Khan who cast her in Om Shanti Om.

Y is for Yeh Jawaani Hai Deewani: The smash hit musical romance saw Deepika starring opposite Ranbir Kapoor. The film became one of the biggest grossing Bollywood hits in history not released on a major holiday. It received a massive number of award nominations.

Z is for Zodiac: Born on January 5, Deepika is a Capricorn. Those born under that star sign are known to be ambitious, hardworking, down-toearth, disciplined and patient. She has used these qualities to rise to the top.

Padmaavat is in cinemas now 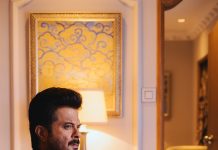