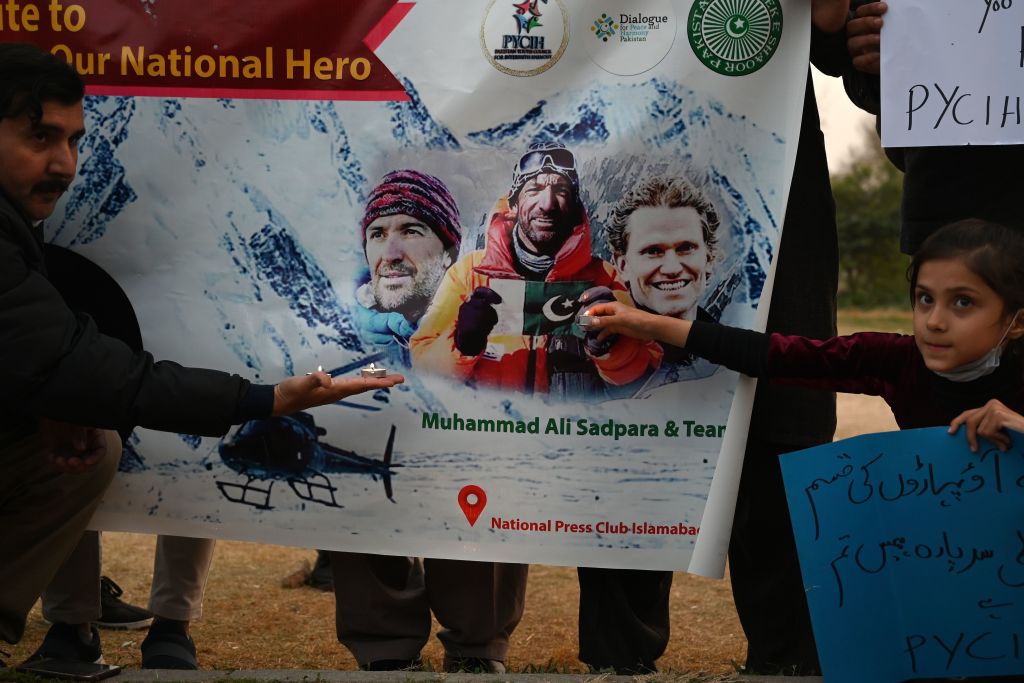 People hold candles to pay tribute to climbers John Snorri from Iceland, Juan Pablo Mohr from Chile and Muhammad Ali Sadpara of Pakistan during a vigil in Islamabad on February 22, 2021. (Photo by AAMIR QURESHI/AFP via Getty Images)

THE bodies of three mountaineers who died during a winter expedition on Pakistan’s K2 have been found months after they went missing while scaling the world’s second-highest peak, officials said Tuesday (27).

The remains of Pakistani mountaineering legend Muhammad Ali Sadpara, Iceland’s John Snorri and Juan Pablo Mohr from Chile were spotted on Monday (26) near “the bottleneck” – a narrow gully just hundreds of metres from the summit.

“We are now focusing on a strategy to bring the bodies to a point from where they could be airlifted,” Ayaz Shagri, an official with the Alpine Club of Pakistan, said.

“The bodies of the mountaineers are intact and frozen,” Shagri added, saying the climbers’ remains were at an altitude of 7,800 metres (25,600 feet).

“It is very difficult to bring the dead bodies down from this high altitude,” said Karrar Haidri, also from the Alpine Club, adding that the military was helping with the operation.

The trio lost contact with K2’s base camp in early February, sparking a massive rescue effort that included military helicopters and planes.

Sadpara’s son Sajid is in the team coordinating the recovery effort, Shagri added.

The discovery of the bodies followed the death on Sunday (25) of Scottish climber Rick Allen, who was killed after being hit by an avalanche.

With Pakistan’s borders open and few other places to go due to the coronavirus pandemic, the country’s summer climbing season is attracting a large number of alpinists.

Known as “the savage mountain”, K2 has harsh conditions – winds can blow at more than 200 kilometres per hour (124 miles per hour) and temperatures can drop to minus 60 degrees Celsius (minus 76 Fahrenheit).

Unlike the world’s highest peak Mount Everest, which has been scaled by thousands of climbers young and old, K2 is much less travelled.