Under the party constitution, the leadership will lead the party for the next three years, while Hasina (75) has remained the head of the moderate party since 1981 when she returned home from India where she was living a self-exiled life from August 1975. 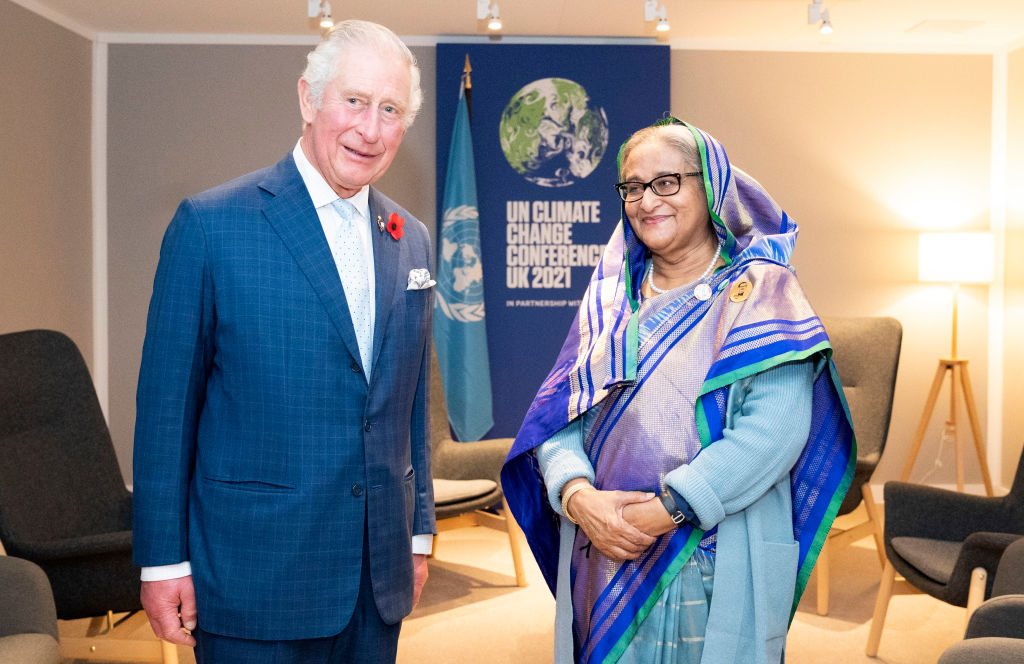 Charles III, then Prince of Wales, greets the Prime Minister of Bangladesh Sheikh Hasina Wazed ahead of their bilateral meeting on day three of COP26 at SECC on November 2, 2021 in Glasgow, United Kingdom. (Photo by Jane Barlow – Pool / Getty Images)
Follow Us

Bangladesh’s ruling Awami League on Saturday re-elected Prime Minister Sheikh Hasina as the party chief for the 10th consecutive term and Obaidul Quader as general secretary amid preparedness for general elections in early 2024.

The 73-year-old party, which steered the country’s 1971 liberation war against Pakistan, re-elected its top leadership in a closed-door session in Dhaka.

Nearly 7,000 councilors from across Bangladesh joined the Awami League’s 22nd national council at an auditorium in central Dhaka following an open rally at adjacent Suhrawardy Udyan.

Under the party constitution, the leadership will lead the party for the next three years, while Hasina (75) has remained the head of the moderate party since 1981 when she returned home from India where she was living a self-exiled life from August 1975.

Bangladesh’s founder and Hasina’s father, Bangabandhu Sheikh Mujibur Rahman was killed along with most of his family members on August 15, 1975. His post independence Awami League-led government was also toppled on that day when Hasina and his younger sister Sheikh Rehana were in Germany on a brief tour. The two sisters later took refuge in India.

According to party sources, senior Awami League leader Amir Hossain Amu proposed Hasina’s name as the party president in the council session seconded by another councilor on Saturday. The decision was accepted by everybody present at the meeting.

Awami League leader Sadhan Chandra Majumder proposed the name of Obaidul Quader as general secretary, and the decision was accepted, they said.

Quader, who will resume the post for the third consecutive term, had earlier told media not to expect any major changes in the party’s highest policy-making Central Working Committee.

Earlier in the day, Hasina inaugurated the council by hoisting the national flag and releasing pigeons and balloons.

A three-member election commission was formed to elect the party leadership.

Awami League’s first president was Maulana Abdul Hamid Khan Bhashani and since then it has been led by eight different chiefs, including Bangabandhu Sheikh Mujibur Rahman.