A faulty boiler caused an explosion at a Bangladesh factory that killed 13 people this week, authorities said Wednesday (5), as survivors accused the owners of ignoring their concerns.

A government inspector said a licence to use the 15-year-old boiler which exploded on Monday night had expired last month.

His comments came as survivors of the blast told local media they had alerted the factory’s owners of problems with the boiler, but their warnings went unheeded.

“The licence of the boiler expired on June 24. It’s a five-tonne boiler and aged more than 15 years,” deputy chief inspector of the government’s boiler department Ziaul Hoque said.

“In our primary investigation, we have found that the explosion occurred due to excessive pressure in the boiler.”

Most of the plant’s 5,000 workers were off for the Eid holidays when the boiler exploded during maintenance work, causing a section of the six-storey building to collapse.

It was the latest disaster to highlight the poor safety record of the country’s $30-billion garment industry, the second largest in the world.

Local police chief Aminul Islam said at least 10 people had been charged, including three boiler operators who died in the explosion.

He said police would also prosecute the owners of the factory if they were proven to be at fault.

“They (the operators) ran the boiler despite knowing that it was in bad condition. If they did not start the boiler, it would not have exploded,” he said.

The plant in the Gazipur industrial district on the outskirts of Dhaka is owned by manufacturer Multifabs, which makes clothing for brands including Littlewoods and Aldi according to its website.

One injured worker receiving treatment at a nearby hospital said the boiler was old and “beeping danger signals continuously”, criticising factory authorities for not replacing it.

“Within 10 minutes after we returned to work, the boiler exploded,” Harunur Rashid said.

Multifabs owner Mahiuddin Faruqui said the company had applied to renew the boiler licence and promised compensation for the victims’ families.

“We applied for renewal of the boiler licence on June 19. But all government offices went closed for Eid holidays that week,” he said.

The latest disaster came four years after the collapse of the nine-storey Rana Plaza factory complex in April 2013 in which more than 1,100 people were killed.

In the wake of the disaster, authorities pledged to improve working conditions at factories, but accidents are still commonplace.

Only a few hundred of the country’s 4,500 textile factories have been certified as safe and last year a fire at a factory just miles from Rana Plaza claimed 34 lives. 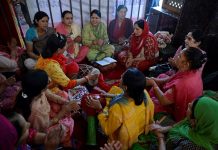