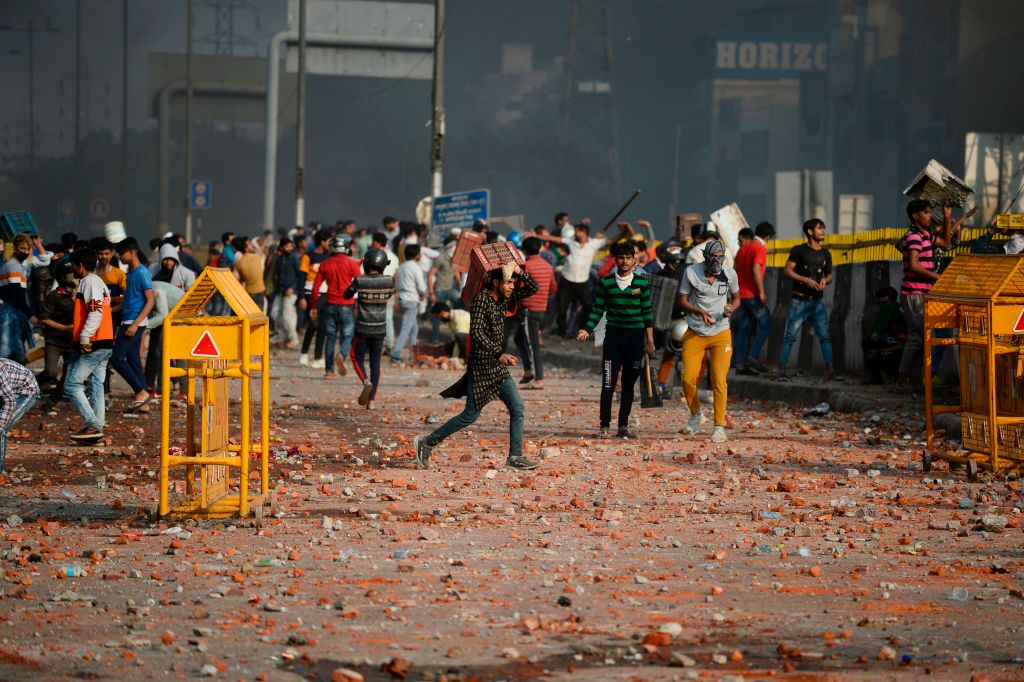 Demonstrators gather along a road scattered with stones following clashes between supporters and opponents of a new citizenship law, at Bhajanpura area of New Delhi on February 24, 2020, ahead of US President arrival in New Delhi. (Photo by SAJJAD HUSSAIN/AFP via Getty Images)
Follow Us

A Delhi Police head constable, Ratan Lal, was killed in the stone-pelting after suffering a head injury, on Monday (24) as clashes broke out in northeast Delhi as pro and anti-Citizenship Amendment Act protesters pelted stones at each other.

Several police personnel, including Deputy Commissioner of Police (DCP), Shahdra, Amit Sharma, were injured during the clashes. Two civilians are also reported to have died due to bullet injuries.

At least two vehicles and a fire tender were torched in Jaffrabad and Maujpur as police had to fire tear gas shells to disperse the protesters.

Section 144 of CrPC has been imposed in the affected areas. It prohibits assembly of five or more persons, holding of public meetings, and carrying weapons.

Trump will hold talks with Modi about 10 km (six miles) from the scene of the violence, Reuters report said.

“I have spoken to Lt Governor Anil Baijal who assured that more police personnel are being sent to the affected areas,” he said.

Very distressing news regarding disturbance of peace and harmony in parts of Delhi coming in.
I sincerely urge Hon’ble LG n Hon’ble Union Home Minister to restore law and order n ensure that peace and harmony is maintained. Nobody should be allowed to orchestrate flagrations.

“The violence today in Delhi is disturbing & must be unequivocally condemned. Peaceful protests are a sign of a healthy democracy, but violence can never be justified. I urge the citizens of Delhi to show restraint, compassion & understanding no matter what the provocation,” he appealed on Twitter.

Multiple vehicles set on fire, metal barricades are torn down and thick smoke billowing as thousands of supporters of the new law clashed with opponents, both sides hurling stones.

The clashes stretched over nearly a kilometre (half a mile) of road and lasted from early afternoon until well into the evening.

Reports said that objectors have been camping out in several parts of New Delhi for two months.

The protesters appeared to be divided along religious lines, and some pulled members of the media aside and asked them about their religion.

Monday’s clashes were some of the worst seen in New Delhi since the protests against the Citizenship Amendment Act (CAA) began in early December.

“We are in support of the CAA. If they want to protest, they should go somewhere else,” said a protester who gave his name only as Amit.

The latest round of violence came just as Donald Trump began his first visit to India as US president, addressing a rally in Modi’s home state of Gujarat.