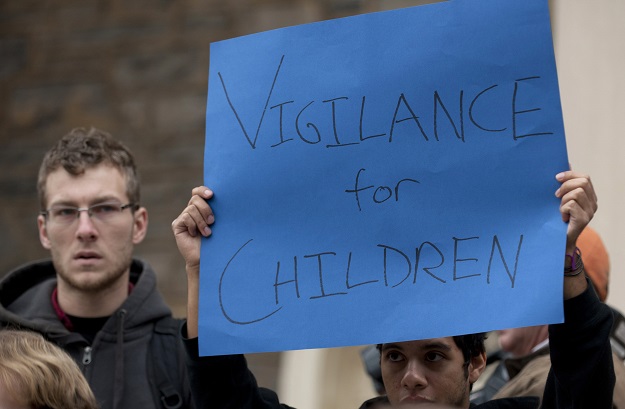 Arguing that the “overwhelming focus on Asian men abusing white girls” risks ignoring other victims and overlooking other offenders, the experts said that child sexual abuse offenders are “remarkably heterogenous” as they urged an evidence-based approach to tackling the crime (Photo: Jeff Swensen/Getty Images).

BRITISH-ASIAN MEN of Pakistani origin are not disproportionately represented among those found guilty of child sexual offences, two academics have said.

Arguing that the “overwhelming focus on Asian men abusing white girls” risks ignoring other victims and overlooking other offenders, the experts said that child sexual abuse offenders are “remarkably heterogenous” as they urged an evidence-based approach to tackling the crime.

Ella Cockbain, who has researched child sexual exploitation (CSE), is an associate professor at University College London in the security and crime science department.

Waqas Tufail, a senior lecturer in criminology at Leeds Beckett University, focuses on policing, racialisation and criminalisation of marginalised and minority communities.

They noted that Asians were notably “not over-represented” among the approximately 172,000 men and 27,000 women who had been convicted of sexual offences in England and Wales in 2016.

Earlier this month, the duo published a paper titled Failing Victims, Fuelling Hate: Challenging the harms of the ‘Muslim grooming gangs’ narrative. Cockbain and Tufail said the term “grooming gangs” was a “spurious media construct”, adding that “grooming” gang offences do not exist in law.

Instead, they suggested using child sexual abuse definitions as recommended by the National Crime Agency.

A report commissioned by Greater Manchester mayor Andy Burnham found last week there was “clear evidence that young people were being sexually exploited, and that this was generally perpetrated by a group of older Asian men”.

However, a review found that Operation Augusta – launched by the Greater Manchester Police – was shut down following a lack of resources, when it should have exhausted all lines of enquiry, especially where there was evidence that could have led to a prosecution.

Cockbain and Tufail said that racial connotations around the term “groomer” and the prevailing “narrow lens on grooming gangs” detracts from the scale of abuse of vulnerable children who had been let down by those agencies meant to protect them, and seeks justice for such groups.

Both experts have also called for a rejection of “culturalist, essentialist explanations of why Muslim men sexually abuse children”, noting that “a relatively small number of high-profile grooming gangs cases have been used to claim an ‘epidemic’ of abuse”.

Offences by ethnic minorities also tend to be over-reported, they said, noting that the Sunday Times was found in breach of reporting codes for its misleading headline ‘Asians make up 80 per cent of child groomers’.

Tufail told Eastern Eye: “The racial narrative on CSE has been challenged by survivors of CSE, activists and some practitioners, but much more can be done.

“In particular, politicians and prominent media commentators need to take much more responsibility when discussing race and CSE. I hope there is serious engagement with the evidence presented in our article.”

In July 2018, then home secretary Sajid Javid ordered a review of the “characteristics” looking at cultural factors that may have led to gangs of mainly Pakistani-heritage men sexually abusing young children. Javid said in December 2018: “When it comes to gang-based child exploitation, it is self-evident to anyone who cares to look that if you look at all the recent high-profile cases there is a high proportion of men that are of Pakistani heritage,” he had said.

A Home Office spokesperson told Eastern Eye on Monday (20): “Child sexual abuse is a sickening crime and predators who abuse children will face the full force of the law. We’re pursuing work on a number of fronts to understand the characteristics of group-based offending and the contexts in which it occurs.

“This includes ongoing work commissioned by the previous home secretary and will inform future government policies on child sexual abuse.

“New sentencing laws will also ensure the most serious violent and sexual offenders spend time in prison that matches the severity of their crimes, protecting victims and giving the public confidence in the criminal justice system.”

In their paper, Cockbain and Tufail noted that women of colour, immigrants and those from the LGBTQ community are “often further brutalised – rather than protected – by the police”.

Lack of funding has also hit grassroots organisations who do “largely unacknowledged” work in tackling violence against women and girls, they noted.

Funding for rape crisis services across England and Wales was £7.2 million in 2018-2019, they added, pointing out that specialist CSE services for BAME victims are “particularly underfunded”.

Child sexual abuse is an problem across British society, they concluded, and is not the “preserve of particular communities”.