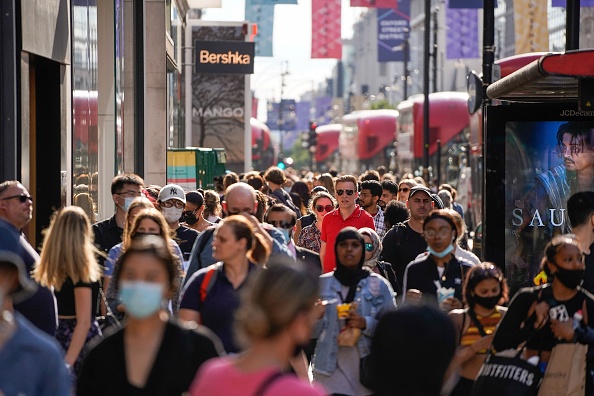 Pedestrians, some wearing face coverings due to Covid-19, walk past shops on Oxford Street in central London (Photo by Niklas HALLE’N / AFP) (Photo by NIKLAS HALLE’N/AFP via Getty Images)

THE UK’s economy faces threat of “potentially catastrophic” risks in the coming years, according to a report published by the Office for Budget Responsibility (OBR).

It said that developed economies like UK could be exposed to risks like climate crisis and huge debt in future, noting that the Covid-19 pandemic had struck just over a decade after the 2008 financial crisis.

The financial watchdog warned that ministers might have to face a potential £10 billion spending black hole over the next three years because of the pandemic.

It also cautioned that delayed action on cutting greenhouse gas emissions could damage the economy and add to the UK’s huge debt, which currently stands at more than £2 trillion.

The report said that a delay in world action towards reducing carbon emissions could lead to a 3 per cent additional impact on gross domestic product (GDP).

However, if an early action is initiated in the UK and globally to achieve net zero carbon emission, the UK’s debt burden would be less severe, adding only 21 per cent, or £469bn, of GDP to net debt by 2050-51, OBR said.

Meanwhile, if no action is taken to control the climate crisis, then UK debt would rocket, and reach 289 per cent of GDP by the end of the century.

The report expected Britain’s economy to recover to pre-pandemic levels by the middle of next year, however it might suffer a 3 per cent permanent hit.

The OBR did not update its economic forecasts in the report, but said the economy had proved “surprisingly adaptable and resilient to the coronavirus shock”.

It warned against large-scale economic disruptions which might become more frequent in future.

“The arrival of two major economic shocks in quick succession need not constitute a trend, but there are reasons to believe that advanced economies may be increasingly exposed to large, and potentially catastrophic, risks,” the OBR said.