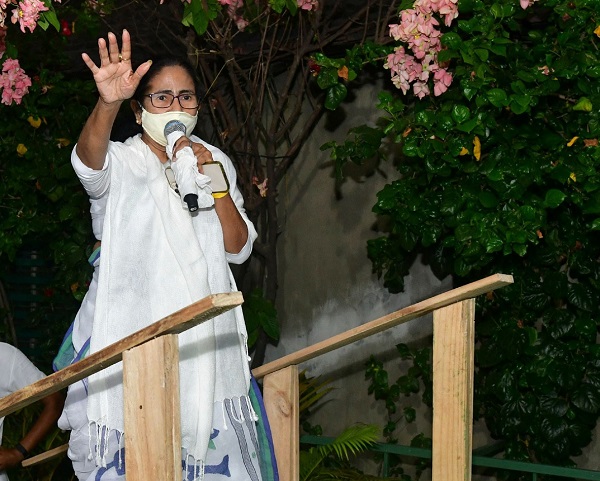 But the key battleground was West Bengal, where the prime minister Nar­endra Modi and his home minister, Amit Shah, leaders of the Bharatiya Janata Party (BJP), were determined to topple the Trinamul Congress (TMC) chief minister, Mamata Banerjee (“Didi”).

The BJP got only three seats in the as­sembly elections in 2016 out of 294, but in the general election in 2019, it did re­markably well to win in 18 out of 42 Lok Sabha constituencies. How would it fare in the assembly elections this time?

Over the past few weeks, I was told by people whose business it is to know that the BJP might win. Modi and Shah, who took it in turns to stage 40 rallies in the state, predicted the BJP would win more than 200 seats.

The BJP deployed all its resources in West Bengal. It accused Mamata of “ap­peasement politics” and “pandering” to Muslims. She had to campaign from a wheelchair after her foot was crushed by her heavy car door swinging back.

A number of her former senior colleagues – described as “turncoats” by her supporters – were now standing as BJP candidates. Her former deputy turned foe, Suvendu Adhikari, called her a “Begum” and an “aunt” of “infiltrators” (from Bangladesh) and Rohingyas.

The counting began last Sunday (2). I must say I was impressed with [Indian news channel] NDTV’s coverage and es­pecially its presenter, Sreenivasan Jain, who was as good as anyone in Britain, probably better.

Within hours the trend was as clear as it was unexpected: “Mamata leads Tri­namul to spectacular victory.”

One party did indeed get more than 200 seats. Only it wasn’t the BJP. “Bengal saved India today,” said Mamata.

Her finance minister, Amit Mitra, whom I have known since he was the general secretary of FICCI (Federation of Indian Chambers of Commerce & Industry) based in New Delhi, described the polls as a “battle for the soul of India”.

The only blemish was the cliffhanger of the election – Mamata’s own defeat in the Nandigram constituency to Adhikari by 1,956 votes. She will have to win an­other seat within six months if she is to remain chief minister.

West Bengal was always seen as a per­sonal fight between Mamata and Modi. The prime minister staked political capi­tal on winning Bengal. There is no hiding the fact that he has been wounded – per­haps not mortally – but very badly. How­ever, one should be cautious of predict­ing he will suffer a similar reverse in the general election in 2024.

The BJP controls the Hindi heartland and remains a formidable election-win­ning machine. Although it did not win West Bengal, it went from three seats to 77 – the TMC has 213 – and will form the official opposition in the assembly.

However, Mamata has shown that Modi is vulnerable and he can be beaten. Many commentators said last Saturday (1) that his decision to use the politics of religion to divide Hindus and Muslims proved counterproductive. It was argued that Bengal voted for a secular, federal India – and this message will percolate through to Modi’s supporters all over the world, not least Britain.

I listened carefully to a former BJP vice-president, Chandra Kumar Bose, the grandnephew of Netaji Subhas Chandra Bose, who said his party should have gone for “inclusive politics” and pro­moted the idea of “unity through diver­sity” rather than divide people on the basis of religion.

Instead, the battle cry at the Modi and Shah rallies was “Jai Shree Ram” (Hail to Ram), a Hindu form of greeting that has come to be associated with the BJP.

Questions are also being asked of the Election Commission, which was ac­cused of helping the BJP by organising the elections in West Bengal in eight stages – and that, too, during the pan­demic. The gaps between phases were designed to allow the BJP to flood the state with workers from outside the state and move them around West Bengal as needed, it is alleged.

Prashant Kishor, a key adviser to Mamata, said the commission had en­gaged in “dirty politics”.

As Covid raged through India, the Madras high court went so far as to say that murder charges should be imposed on the commission for being “the only institution responsible for the situation that we are in today”.

The commission tried to get the Su­preme Court in Delhi to stop the media from reporting the high court’s com­ments, but failed.

“Media is a powerful watchdog in de­mocracy, it cannot be stopped from re­porting discussions in higher courts,” the Supreme Court ruled. “Seeking relief such as media should not report on ob­servations is too far-fetched. We don’t want to demoralise high courts as they are vital pillars of democracy.”

The decision by Modi and Shah to ad­dress huge rallies in West Bengal is also being criticised. It is fortunate for them that most stages of the elections in West Bengal and elsewhere had already taken place before the recent Covid surge. The prime minister is being blamed for the lack of preparedness and the oxygen shortages even in private hospitals in Delhi, Mumbai and other cities.

The death toll is also said to be many times that of the official figure. The evi­dence comes from the cremation grounds which can scarcely cope with the queue of corpses.

One report said: “Modi’s mismanage­ment of the second wave of Covid also took a heavy toll. Trinamul Congress won over 90 of the 114 seats that went to the polls in the last three phases when the pandemic’s traumatic impact had become all too apparent.”

Modi did tweet a message to Mamata: “Congratulations to Mamata Didi for TMC’s win in West Bengal. The centre will continue to extend all possible sup­port to the West Bengal government to fulfil people’s aspirations and also to overcome the Covid-19 pandemic.”

We should not rush to judgement, but the significance of what happened in West Bengal extends to the whole of India.

A friend, who monitors the Covid situ­ation in the country, had predicted a year ago that India had to prepare for the pandemic and the result could be dire if it didn’t. Last Sunday, he told me: “Two million people could die.”