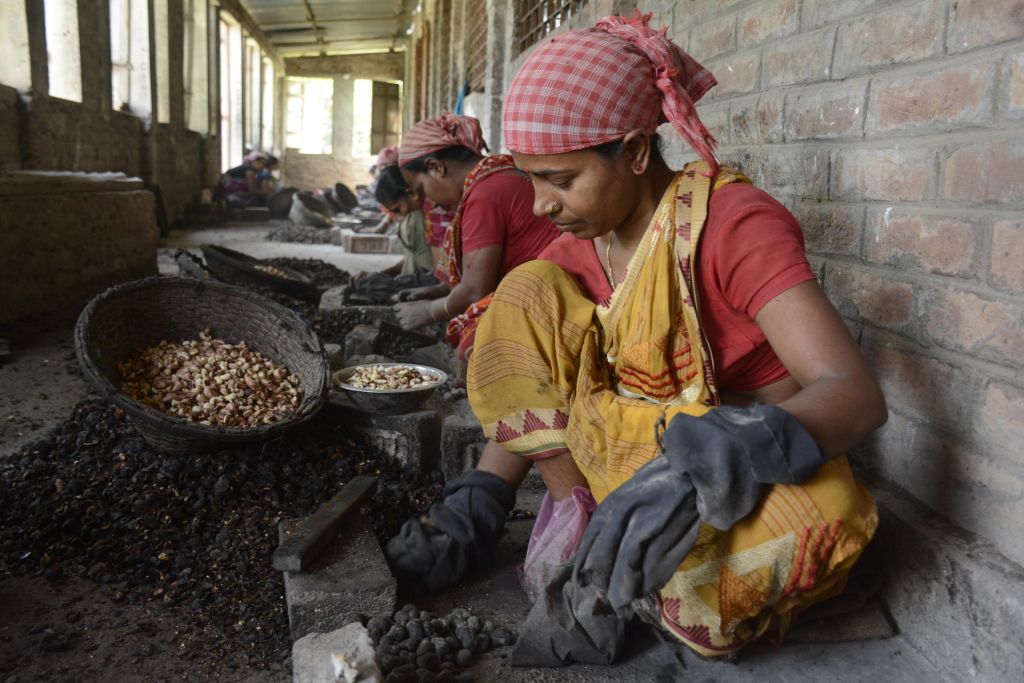 Indian women work at a cashew-processing factory in Agartala, the capital of the northeastern Indian state of Tripura. (Photo by ARINDAM DEY/AFP via Getty Images)

FEMALE labour participation rate in India fell to 16.1 per cent during the July-September 2020 quarter, the lowest among the major economies, a government report said, reflecting the impact of pandemic and a widening job crisis.

The percentage of women in the labour force had fallen to a record low of 15.5 per cent during the April-June 2020 quarter, when India imposed strict lockdown to curb the spread of Covid-19 virus, said the report, released late on Monday (2) by the Ministry of Statistics.

Most employed women in India are in low-skilled work, such as farm and factory labour and domestic help, sectors that have been hit hard by the pandemic.

The unemployment rate among women touched 15.8 per cent, compared with 12.6 per cent among male workers during three months that ended in September 2020, the latest quarter for which data was released.

Most employed women in India are in low-skilled work, such as farm and factory labour and domestic help, sectors that have been hit hard by the pandemic.
Worse, an anticipated slow economic recovery, the closure of thousands of factories and a sluggish vaccination rate, especially among women, is expected to undermine their attempts to return to the workforce.

‘Women’s social and economic gains wiped out during Covid’

“Whatever social and economic gains Indian women had made in the last decade, it has been largely wiped out during the COVID period,” said Amarjeet Kaur, general secretary of the All India Trade Union Congress, one of the largest trade unions in India.

The second wave of the coronavirus pandemic is expected to deepen economic stress in India, which was already in its worst recession for seven decades.

With the vast majority of Indians working in the informal sector, precise estimates of job losses are difficult. But in a country without a comprehensive welfare system or pandemic-related support for small businesses, several industry bodies have reported widespread redundancies over the past year.

The Consortium of Indian Industries (CIA), which represents over one million small firms, said women make up 60 per cent of the job losses.

A report by the Centre for Sustainable Employment at Azim Premji University found that 47 per cent of women workers who lost their job between March and December – before the second wave of the virus hit in April – were made permanently redundant.

That compared with around seven per cent of male workers, many of whom were able to either return to their old jobs or take up independent work like selling vegetables.

In Okhla, home to makers of garments, auto parts and food packaging, employers say they have almost halved their workforce following a dip in orders and a rise in input costs like transport and steel.

Chetan Singh Kohli, a printing material manufacturer and an official of Okhla’s factory owners’ association, said the auxiliary nature of a typical woman’s role meant they were not priorities for reemployment.

“The majority of female workers who work in low-skilled categories like packaging, and on assembly lines at lower wages would be the last ones to get employed, as first we want to restart operations,” he said.

India’s informal service sector, including on-demand services like transportation and food delivery, has been one of the few bright spots during the pandemic, said Manisha Kapoor, researcher at the Institute for Competitiveness think tank, but were dominated by men.

“Those informal sector jobs are not something that women will be taking up,” Kapoor said.

Kaur warned it could take two or three years for women to return to the workforce – if at all – and urged the government to offer incentives to lure them back.
“Migrant women workers, who have left for their villages with families after job losses, are unlikely to come back,” she said.

Traditional household roles in India are further expected to impede women’s return to the workforce.
India’s female-to-male share of housework is among the highest in the world, and women are bearing the majority of childcare with schools still closed due to the pandemic.

“The work is available in faraway factories but I can’t go as there is no one at home to take care of my children,” said Chineya Devi, 32, who lost her job in an Okhla packaging firm earlier this year.

Ritu Gupta, who owns a playschool in Najafgarh, on the outskirts of Delhi, that has been closed for over a year, said, “Our men at home or government officials could never understand the impact of job losses on women.

“I am feeling worthless sitting idle at home. This is not just a monetary loss but the whole meaning of my life.”

Most economic activities have resumed in India after state governments eased pandemic curbs in response to a decline in coronavirus infections from May peaks. That is likely to help create more jobs for all workers, government officials said.

India’s July unemployment rate fell to 6.95 per cent from the June figure of 9.17 per cent, data from the Centre for Monitoring Indian Economy (CMIE) showed on Monday.

Asia’s third-largest economy, which shrunk 7.3 per cent in the fiscal year ending in March, the worst recession in last seven decades, is expected to grow at eight-nine per cent year-on-year in the current fiscal year.