The world body has projected the population on Planet Earth to peak 10.4 billion in the 2080s. 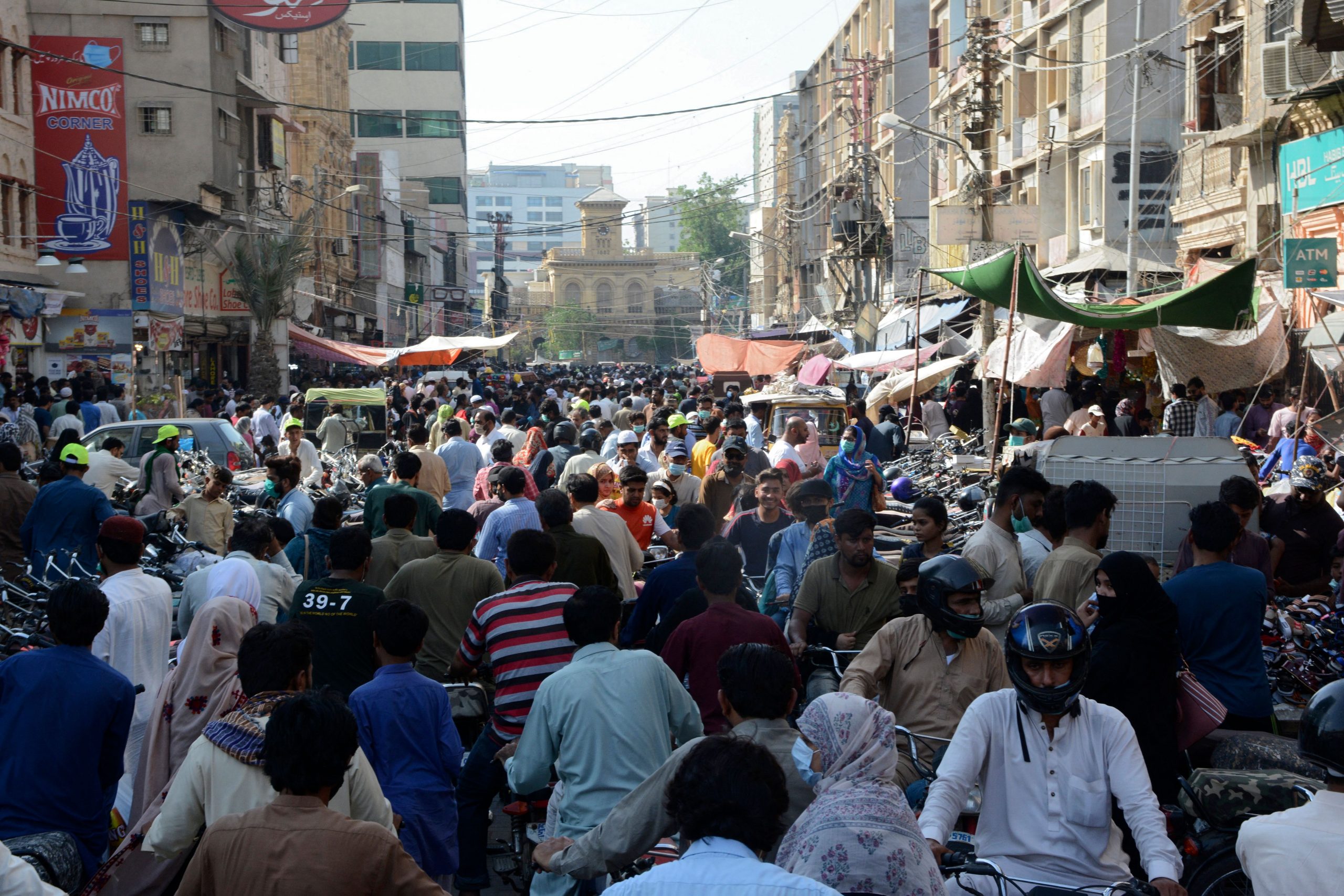 A crowded market place in Karachi, Pakistan. (Photo by ASIF HASSAN/AFP via Getty Images)
Follow Us

THE United Nations (UN) World Population Prospects report released on the occasion of the World Population Day on Monday (11) projects a further two-and-a-half billion people to be added to the global population.

The world population is projected to peak 10.4 billion in the 2080s.

The population of the world is set to touch the eight-billion mark on November 15 this year.

Robin Maynard, director of UK-based international population campaigning charity Population Matters, responded to the projections, told UK-based charity Population Matters, “It is very welcome to see the UN projecting a lower and earlier peak in population growth. High population growth is a red flag for injustice and human suffering: occurring where people are poor, where infant mortality remains high, where too few girls finish school and where women cannot freely access and use modern contraception.

“The bending down of the population curve means better lives and greater choices for a greater proportion of people on a healthier planet.

“But these are projections, not predictions, and future progress is under grave threat. Redoubled efforts, investment and commitment to tackle the injustices that lead to high population growth are more critical than ever before.

“In high-income countries like the UK there will be grave mutterings of ‘sub-replacement’ fertility, ageing populations, dependency ratios, and ‘pension crises’. These are genuine but exaggerated, ‘first world’, challenges that are predictable and can be adjusted for.

“In the rich world, our environmental impact is the heaviest – in terms of our energy footprint, each UK citizen is equivalent to a 10-tonne King Kong stomping about the countryside. Old school ‘growth’ economists and short-termist politicians raise alarmist notions of ‘economic collapse’, but our planet will be breathing a sigh of relief that there are fewer such mega-consumers being born.

“Discussion about population growth must recognise and prioritise the challenges of the majority world, where women lack choice over their family size, where the evidence of ecosystem collapse is indisputable, and where people are currently least equipped to contend with it.”

Campaigners, activists, health providers and experts from countries such as Nigeria, India, Guatemala and Uganda also spoke on the matter.

The UN projects Nigeria’s population to more than double this century, increasing from 215 million today to 374 million in 2050 and 545 million in 2100. It will overtake the US to become the world’s third-largest country in 2050.

Dr Suchitra Dalvie, co-ordinator, Asia Safe Abortion Partnership, said, “Future predictions of demographic figures may not be able to take into account water shortages, realities of upcoming issues and impacts of pandemics like COVID 19. We are looking at a future of water shortages, climate change as well as a possible change in migration patterns all of which would affect a population.

“We need to remember the commitments we made at ICPD 1994 to protect individual sexual and reproductive rights and not to put ‘population’ ahead of people, and see how each of the climatic changes are going to impact their lives as a whole.”

Bernarda Jimenez, monitoring and evaluation coordinator at WINGS Guatemala, said, “Large families require more resources, while family planning allows for the possibility of considering if it’s better to have one or six children. People have to eat, they have to heat their food. That results in more deforestation. If there are fewer people, that gives the Earth a chance to regenerate. In the [Mayan] cosmovision, there is an integral respect for Mother Earth. Large international mining corporations also create damaging impacts to the environment and our health.

“So many children during the reproductive life of a woman undoubtedly has an impact on her development, her possibility to earn a better income and her quality of life. With a smaller family, you won’t need more land to cultivate corn, you won’t cut down the forest. There will be harmony. Our resources are connected to what we choose to do with our family size.

“In WINGS, we say that everything starts with reproductive rights and being conscious of choosing when to have children, as well as how many.”

Nyombi Morris, Ugandan climate campaigner and CNN Environmentalist of Tomorrow, said, “Global North countries continue to put pressure on our biodiversity and human communities, exacerbating food and water shortages, reducing resilience in the face of climate change, and making it harder for vulnerable groups to rise out of intergenerational poverty.

“Meanwhile, with this growing population and the demands that come with it we need to put plans in place to make sure we remain self-reliant. Here in Uganda, we are seeing inflation, more protests over salaries and unemployment, more deforestation, mining, pollution, unsustainable human settlements, biodiversity loss and all the consequences of climate change.

“This is the time when the population conversation matters most. When laws on women’s rights are being broken and women have no say on their bodies, then we need more support in gender empowerment, especially sexual and reproductive healthcare, and equitable life opportunities for young girls and women. We also need to start addressing the connection between human population pressure and the extinction crisis. We need an economy that doesn’t rely on endless growth, and a societal commitment to improve living conditions for all species.”

Poonam Muttreja, Executive Director of the Population Foundation of India, said, “These numbers are not drastically different from the UN’s earlier projections in World Population Prospects 2019. They add to the mounting evidence that there is no ‘population explosion’ here, and that India should continue to steer clear of coercive methods of population control. Instead, our approach should be that of protecting the reproductive rights of women, for which it is essential to educate and empower them.

Currently, about 9.4 per cent of Indian women have an unmet need for contraception, which means that approximately 22 million women want to stop or delay childbearing but do not have access to a method of contraception. Our focus should be on providing women of all communities access to family planning services while maintaining quality of care.”

Neha Saigal, an Indian climate and gender activist, said, “India’s recent National Family Health Survey, revealed that our Total Fertility Rate for the first time was below replacement level for the first time, at 2.0. That was definitely historic in some sense. It was an important time to reflect that moving forward, the bigger problem that India will have to deal with is not its population growth but growing inequalities based on caste, class and gender. The same survey that celebrates India’s TFR also points out that only 41% of women had access to 10 or more years of schooling.

“India will see its population growth reverse later this century, and the challenge for us will be ensuring equitable development for that population, especially education and opportunities for girls from vulnerable communities to reach their full potential which will be critical to mitigate and adapt to the climate crisis.”