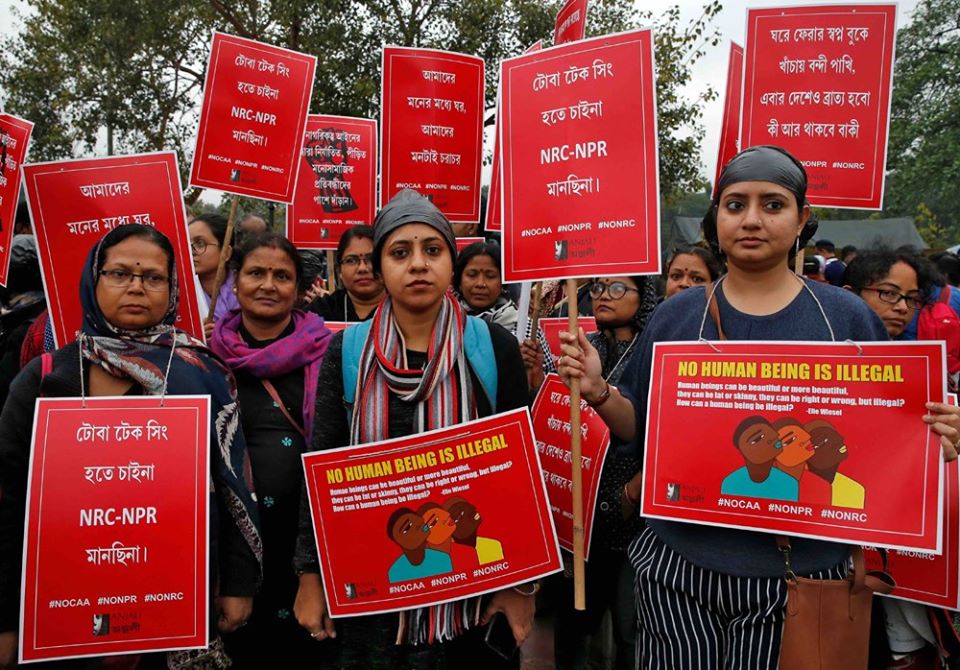 Demonstrators display placards as they attend a protest rally against a new citizenship law, in Kolkata, India, January 3, 2020. REUTERS/Rupak De Chowdhuri
Follow Us

Tens of thousands of people protested across India on Friday (3) against a citizenship law passed by the Hindu nationalist government that critics say discriminates against Muslims.

Some 30,000 marched in the southern city of Bangalore, more than 20,000 in Siliguri and thousands in Chennai, while big rallies were also held in New Delhi, Guwahati and other cities.

Protests have rocked India since legislation was passed in December that eases the way for religious minorities from three Muslim-majority neighbouring nations to gain Indian citizenship, but not if they are Muslim.

Critics say the law is a precursor to a national register of citizens that many among India’s 200 million Muslims fear will leave them stateless. Many poor Indians do not have documents to prove their nationality.

At least 27 people have died in the protests in recent weeks and hundreds more have been injured in clashes with police, fuelling public anger.

Nineteen of the deaths have been reported in the northern state of Uttar Pradesh, where police have been accused of using disproportionate force against protesters.

Many prominent activists, including a television actress, have been detained.

At the Bangalore protest, businessman Nazir Ahmed said that “Hindus, Muslims and Sikhs are gathering everywhere to protest and we shall continue to protest until this law is cancelled.”

In New Delhi, protesters vowed to continue their “resistance just like Hong Kong”, where a pro-democracy campaign has raged for nearly seven months.

“Police are trying to curb the protests in the most brutal way possible in a democracy but we won’t back down,” said Shristi, a 19-year-old student who gave only one name.

“In our own ways we will try to keep this movement alive till this law is revoked,” she told AFP.

Nabiya, a 24-year-old student, said protesters were inspired by other movements such as in Hong Kong and Chile.

“We are not asking for a favour. The government has to revoke the law. It’s our right that we are asserting,” she told AFP as she prepared to recite a “protest poem” in Urdu.

Home Minister Amit Shah insisted Friday that the law was not discriminatory, as he launched a campaign to dispel “misinformation” that he said was being spread by opposition parties.