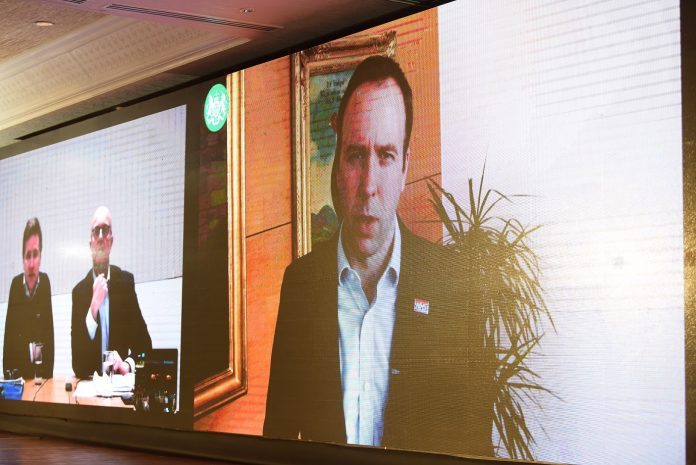 HEALTH secretary Matt Hancock has stressed that he is a “supporter” of community pharmacy and felt the sector had a “crucial role” to play in the health and well-being of the nation.

He was speaking via video-link at the 12th annual Sigma Community Pharmacy Conference, titled Seeing things Clearly, which Hancock called an apt title as he saw a clear future for pharmacists where their clinical skills were better utilised as they become an integrated part of the NHS.

“You know just how much of a supporter I am of community pharmacy. I am absolutely convinced that community pharmacy can make a much bigger contribution to the health and well-being of our nation,” said Hancock.

“We want to see community pharmacy far more integrated into the NHS working in collaboration with other primary and secondary care providers, ultimately with the goal of keeping people healthy in their communities, reducing the pressure on other parts of the system.”

A five-year funding for pharmacy was announced in August 2019 with a shift from dispensing to clinical services.

Hancock thanked community pharmacists for embracing the change as he revealed more than 90 per cent of pharmacies had signed-up to the Community Pharmacy Consultation Service (CPCS), in which GPs and NHS 111 refer patients with minor illnesses to pharmacists for treatment. “There is huge potential for community pharmacists to do more. To support patients, particularly in providing health advice for minor illness and make better use of their clinical skills. And I am absolutely determined to remove the barriers to make that happen.

“We will do our part by aligning the work we commission and incentivise through the national contract (for GPs and pharmacies). We want to hear from you on what you can do more of and put that in the contract in the future and bring that integration together.”

The Sigma conference is hosted annually by one of the UK’s largest independent wholesalers, Sigma Pharmaceuticals, which serves over 3,000 pharmacies up and down the country. The business was started by Bharat Shah and his family from a single pharmacy shop in Watford in 1982.

Held this year at the exotic island of Cebu in the Philippines, Sigma conferences seek to raise standards and share best practice within the profession.

Chairing the conference, Sigma’s executive director, Hatul Shah, said: “I am also a superintendent pharmacist, a contractor and someone experiencing the same aspects of change that I am sure all of you are experiencing in your pharmacies.

“2019 has been a challenging year for the pharmacy sector. But the revolutionary and much anticipated announcement of the CPCF (Community Pharmacy Contractual Framework) in July 2019, is the first to give us, as pharmacy owners, certainty about what the future holds for our sector so that we can start plan and make informed business choices.”

The flagship programme of national pharmacy contract, the CPCS, which Hancock praised in his address, has been dubbed as a potential game-changer for the sector. But the conference heard concerns around workforce challenges. Simon Dukes, chief executive officer of the Pharmaceutical Services Negotiating Committee – who addressed the conference via a live video link on Monday (17) – felt the successful roll-out of CPCS had used up a lot of the pharmacists’ time.

Stating that “capacity is still something that concerns me considerably”, he said: “Decommissioning Medicines Use Reviews (MURs) would have freed up pharmacists’ capacity to carry out services. That capacity is already being used up.”

Speaking alongside Dukes from the PSNC headquarters in London at 2 am, Steve Brine MP said: “I’m very clear that opportunity knocks for your sector. There’s no question you have some brilliant people both at the frontline and representing you inside the government.”