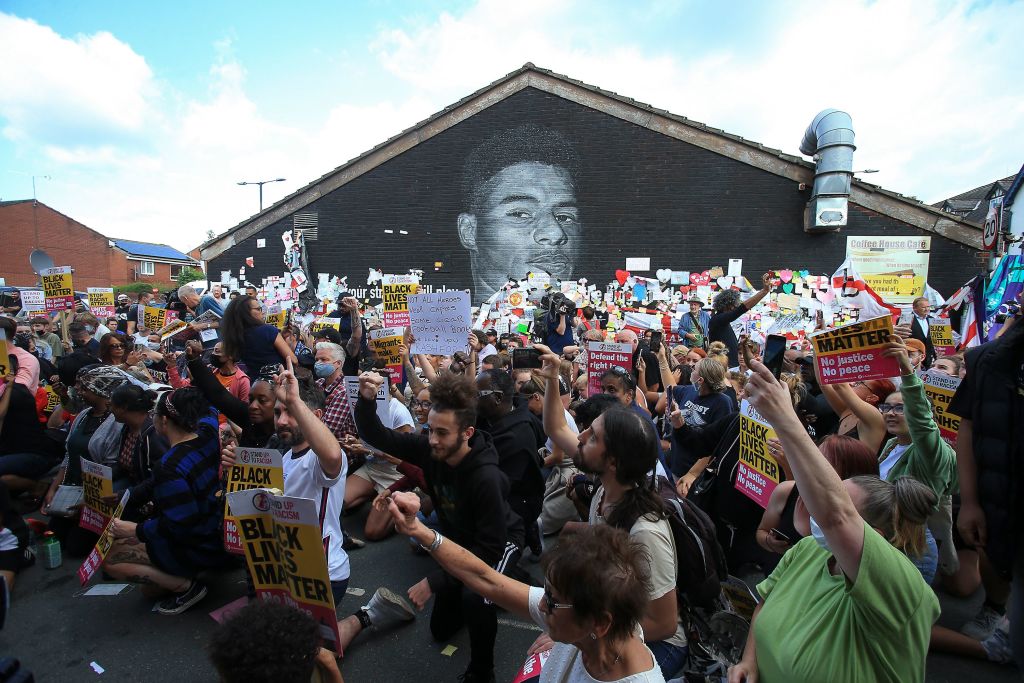 Anti-racism protestors demonstrate by a mural of England forward Marcus Rashford after it was defaced on July 13, 2021 in Manchester, northwest England. – (Photo by LINDSEY PARNABY/AFP via Getty Images)

FOOTBALL is often referred to as the ‘beautiful game’. But racist trolls showed their ugly side when they targeted three black players – Marcus Rashford, Jadon Sancho and Bukayo Saka – with abuse on social media following the European Championship finals last
Sunday evening (11).

All three had missed penalties in England’s 3-2 shootout loss, which handed the title to Italy.

The abuse was promptly condemned by a number of prominent figures, including England coach Gareth Southgate and the Duke of Cambridge, who is the president of the Football Association.

However, racism in football is not a recent phenomenon. In 2019, a study by anti-discrimination charity Kick it Out showed that reports of racism in English football rose by 43 per cent.

It was the seventh consecutive year that incidents of discrimination within football had increased.

The abuse against members of the England team is despicable, but it is important to remember that it has been incited by a minority.

Just hours after a mural of Rashford had been defaced by racists in Manchester, supporters covered it with messages of support and love.

The England national team has brought the country together with its performances throughout the Euros 2020 this summer, so we should follow their lead and stay united in the face of racism.