Coronavirus cases in Pakistan surge to 136, most cases from Sindh province 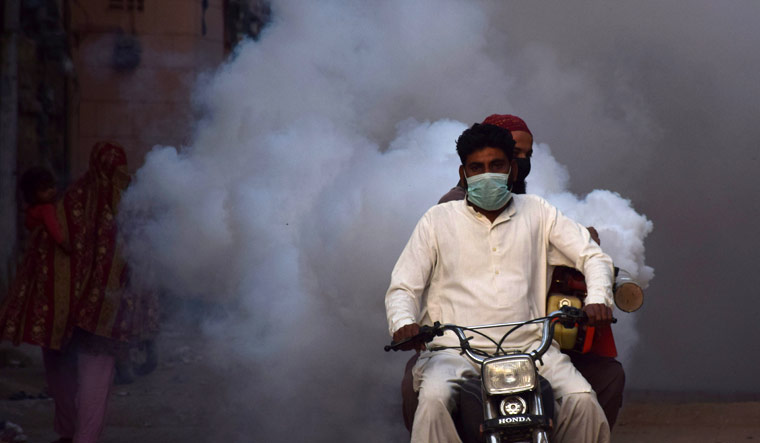 Health workers on motor-bike fumigate, as a preventive measure against coronavirus, along a street in Hyderabad, Pakistan March 15, 2020 | Reuters/Yasir Ali

Pakistan on Monday (16) witnessed a surge of 83 coronavirus cases, mostly in the Sindh province, bordering Iran, bringing the total number of COVID-19 infections in the country to 136, an official said.

Most of the new cases were reported in the southern Sindh province where a government spokesman said the infected persons were among those who were shifted from Taftaan on Iran’s border to Sindh.

The official said that Sindh was on the top of the list with 103 patients, followed by Khyber Pakhtunkhwa with 15, Balochistan 10, Gilgit-Baltistan 5, Islamabad 2 and Punjab 1.

Sindh health minister Azra Fazal Pechuho said the provincial tally of coronavirus victims soared to 103. She said there were 76 confirmed cases in Sukkur, who all arrived from Taftan, 26 in Karachi and one in Hyderabad.

Khyber Pakhtunkhwa health minister Taimur Khan Jhagra said the first reported cases in the province came from Taftan on the border with Iran where they were kept in isolation before allowed to go to their areas.

“Just received news that 15 of 19 individuals received in KP from Taftan have tested positive for coronavirus. These are the first positive cases in KP,” he said.

The number of quarantined pilgrims in Taftan rose to 4,000 by March 11. Some of them were allowed to go their provinces after local Balochistan government said it could not handle the rush of pilgrims coming from Iran.

About around 300 people were taken to Sindh and quarantined at Sukkur to undergo tests before going to their homes.

Sindh Chief Minister Murad Ali Shah accused in a press conference that pilgrims were not properly isolated at Taftan and were kept together.

Meanwhile, the government is taking steps to contain the pandemic as authorities in Punjab province converted all public sector universities’ hostels into quarantine centres as an immediate arrangement.

Officials said that universities were informed in the province to clean all hostels and shift the belongings of students, if there were any, to storerooms after properly tagging them for identity.

The prime minister’s adviser on health Dr Zafar Mirza said that all educational institutions have been closed and their staff stopped from attending the institutions.

The deadly virus, which originated in China’s Wuhan city in December, has claimed over 6,500 lives and infected more than 169,000 people over 135 countries and territories.

China remains the hardest-hit with 80,860 infections and 3,213 deaths. After China, Italy and Iran are the two worst-affected countries.

Among other things, it decided to close down the western border with Afghanistan and Iran. It also ordered the closure of all educational institutions in Pakistan till April 5 in view of the virus outbreak.

Sports
Kohli has showed signs of being a ‘great leader’: Rahul