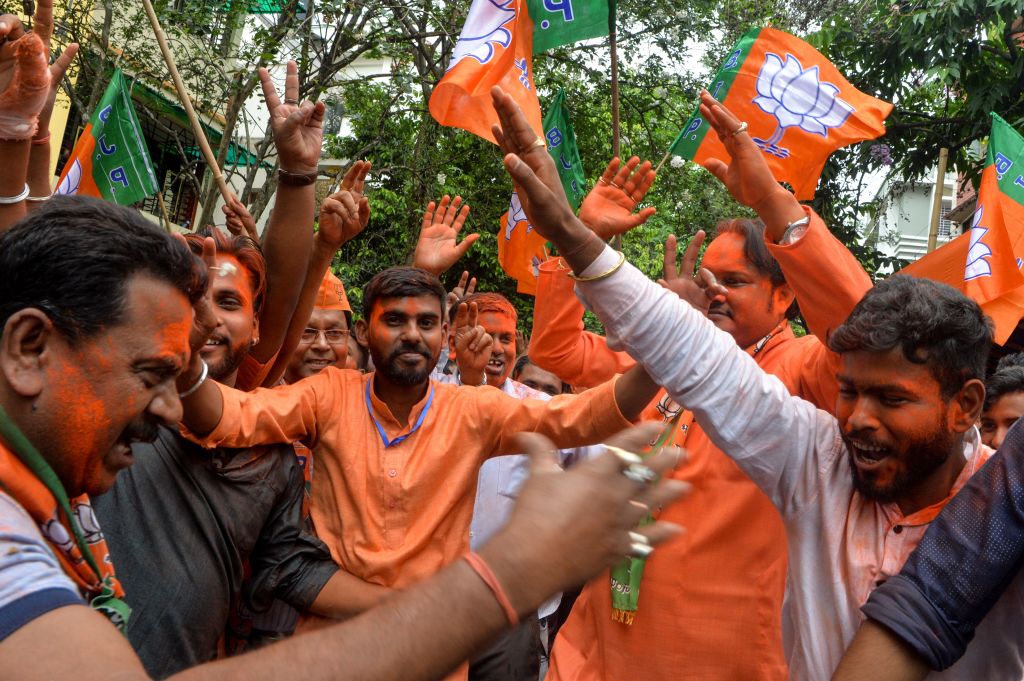 Indian supporters of Bharatiya Janata Party (BJP) dance as they celebrate on the vote results day for India’s general election in Siliguri on May 23, 2019. – Indian Prime Minister Narendra Modi looked on course on May 23 for a major victory in the world’s biggest election, with early trends suggesting his Hindu nationalist party will win a bigger majority even than 2014. (Photo by DIPTENDU DUTTA/AFP/Getty Images)
Follow Us

With trends favouring BJP at the Centre and the party making deep inroads in West Bengal, the saffron party workers and supporters burst into celebrations outside its headquarters here and elsewhere.

BJP workers were seen distributing sweets, shouting slogans “phir ek bar Modi sarkar” and dancing to the beat of drums in various parts of the state.

The BJP and the ruling TMC had been locked in a fierce battle in West Bengal. BJP had set a target of winning more than 23 seats, while the TMC had set its sight of winning all the 42 Lok Sabha seats in the state.   Reacting to initial trends, BJP national general secretary and Bengal minder Kailash Vijayvargiya said the trends reflect the “anti-TMC mood” of Bengal.

“The initial trends reflect the anti-TMC mood. Despite so much terror in Bengal, the people have reposed faith in BJP under the leadership of Narendra Modi and Amit Shah. The days of TMC’s misrule are numbered in Bengal,” Vijayvargia said.

Riding on a massive Modi wave sweeping through most parts of India, the BJP is set to return to power Thursday as it led in 292 seats while the Congress trailed far behind with 51, according to trends released by the Election Commission for all 542 seats that went to polls.

The BJP seems appeared to make deep inroads into West Bengal by leading in 16 seats, while Mamata Banerjee’s Trinamool Congress is ahead in 25 seats in the state.      The Congress is leading in just one constituency, while the Left is yet to take a lead in any of the 42 seats.

As per initial trends, the TMC has so far secured 44.61 per cent votes closely followed by BJP, which has bagged 38.99 per cent votes.  BJP state president and the party’s candidate from Medinipur Lok Sabha seat, Dilip Ghosh said he is confident that the party will cross the mark of 23 seats in Bengal out of the 42 seats.

In the outgoing Lok Sabha, the TMC has 34 seats in West Bengal, whereas the BJP has only two.   The Congress and the CPI(M)-led Left Front have four and two seats respectively.