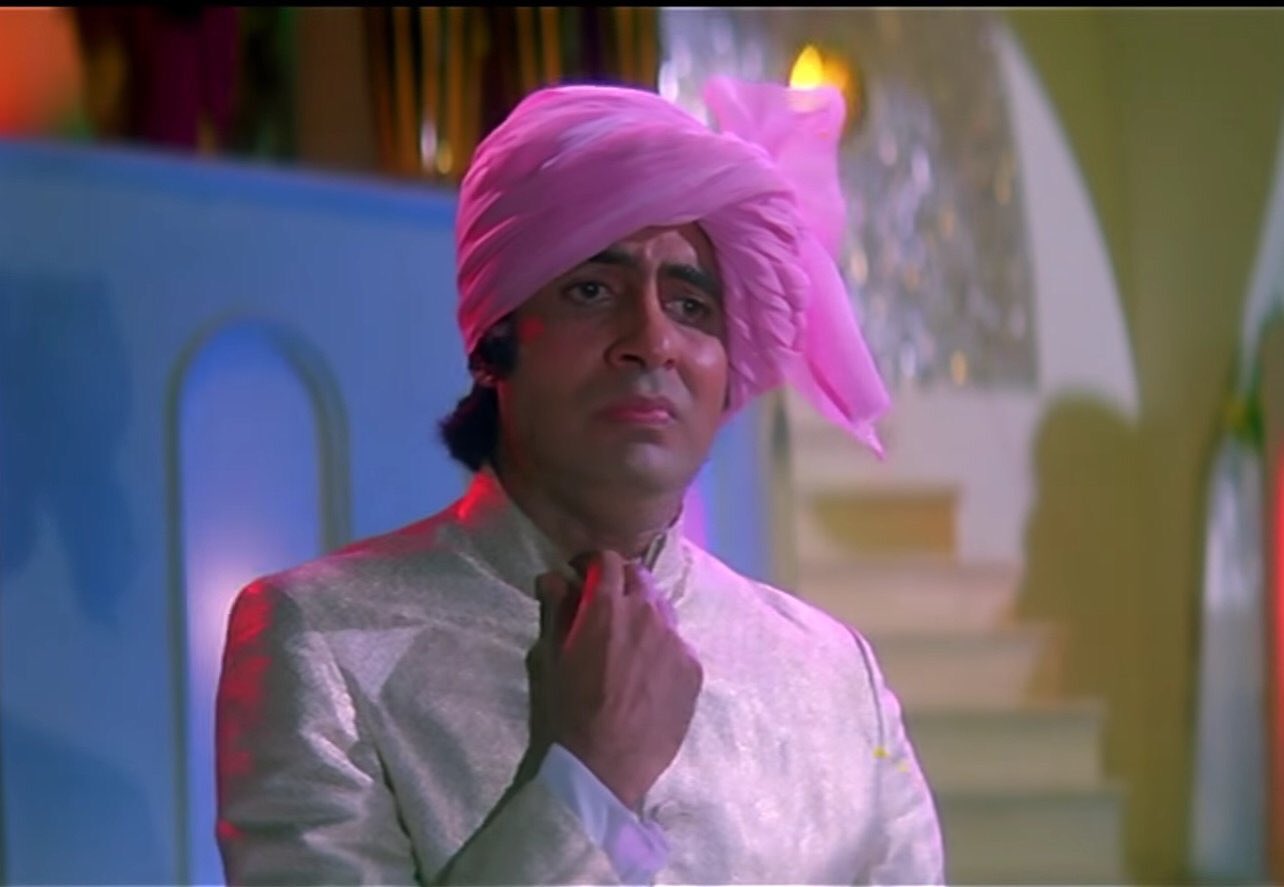 By: ASJAD NAZIR and DHARMESH PATEL

HE MAY be known as a great actor, but Amitabh Bachchan has also delivered plenty of magical musical moments on-screen and most of these have come from the phenomenal way he has brought songs to life.

By performing pretty much every type of track in films throughout his illustrious career, the iconic star has gifted audiences unforgettable music-related memories across the decades.

Eastern Eye decided to mark the Big B celebrating his 79th birthday on October 11 by compiling a playlist of his 20 most uplifting on-screen songs, which capture his spirit and still have a great energy, presented in chronological order (limiting ourselves to one per film).

Dekha Na Hai Re from Bombay To Goa (1972): This was the first track to truly show Amitabh Bachchan’s potential as a performer. Dressed in a bright shirt, he uses every part of a moving bus to bring this upbeat number to life and give Bollywood audiences a first glimpse of a future superstar. 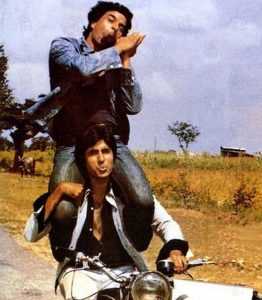 Yeh Dosti from Sholay (1975): Everyone is enjoying freedom by reconnecting with friends again and Yeh Dosti remains the perfect track to celebrate that bond. The ultimate Bollywood friendship track was pictured so well that it still brings back memories of Dharmendra and Bachchan on a motorbike and sidecar. It still has everyone singing along in unison and no other friendship song comes close. 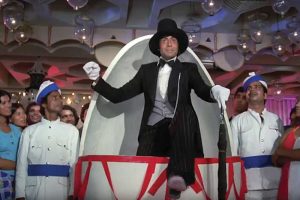 My Name Is Anthony Gonsalves from Amar Akbar Anthony (1977): Who can forget the visual of Amitabh Bachchan emerging out of an Easter Egg to perform the most comical song of his career? The lyrics are all over the place but are beautifully brought together by his smile-inducing performance in top hat, tails, and umbrella. And all while he tries to woo a beautiful lady. 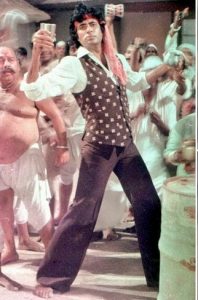 Khaike Paan Banaras Wala from Don (1978): The lyrics for this upbeat solo dance number don’t make much sense and they don’t need to because of the brilliant energy generated by Bachchan on-screen. With people starting to party again, this intoxicating track is perfect to bust some dance moves to. We won’t talk about the ropey cover version in the Don remake and appreciate the feelgood factor of the original.

Rote Hue Aate Hain Sab from Muqaddar Ka Sikandar (1978): The powerful drama had some great musical moments, including the emotionfilled O Saathi Re, but this magnificent song picturised on a motorbike remains iconic and one many have tried to copy. The fabulously philosophical number had great strength and will forever be associated with a magnificent motorbike ride through the streets of Mumbai.

Sara Zamana from Yaarana (1981): The image of Amitabh Bachchan in a suit covered in flashing lights became legendary and was copied in subsequent years. He plays a singing star, who delivers a dynamic dance performance powered by a pumping beat and an unforgettable outfit we all secretly want to own. 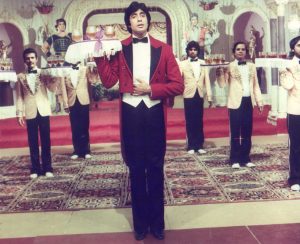 John Jani Janardhan from Naseeb (1981): The legendary musical moment in time will be remembered for the massive number of stars making guest appearances as themselves. But in perhaps the most sweetly ironic moment of all time, the biggest star of all played a singing waiter performing the catchy song, and that was of course the mighty Amitabh Bachchan. Along with performing the entertaining song, he serves drinks, lights up a cigarette for a guest, and even catches a pickpocket.

Mere Angne Mein from Laawaris (1981): This track may be seen as politically incorrect today, but it was a rage at the time and remains iconic. The Big B put everything into this entertaining song, from providing his own vocals to dressing up in drag, to represent the various types of women he was singing about. 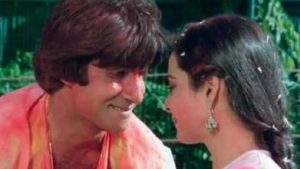 Rang Barse from Silsila (1981): There have been some great Bollywood Holi numbers across the decades and for many this is arguably the greatest. Bachchan sang the song himself and performed it brilliantly on the big screen. What made it extra special was that his father had written the lyrics to this iconic number, which remains popular 40 years later, and has collectively been viewed well over 100 million times on YouTube. 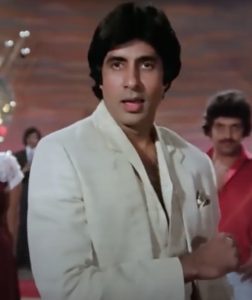 Jahan Teri Yeh Nazar Hai from Kaalia (1981): It takes a smooth operator to steal a necklace while singing a catchy song, but that is what the actor does as he waltzes wonderfully through this musical number. He fills the track with an infectious energy that still brings back memories and makes you want to dance. Just don’t steal an expensive necklace while doing so!

Zindagi Milke Bitayenge from Satte Pe Satta (1982): The Bollywood adaptation of Hollywood classic Seven Brides For Seven Brothers had this catchy song about togetherness and that is something we all need now more than ever. This is perfect for having a large celebration and hugging one another while you dance like no one is watching. For dance tips, watch the track of a bearded Bachchan having a great time with his on-screen brothers.

Pag Ghungroo Baandh from Namak Halaal (1982): Decked out in an unforgettable pink turban, the actor once again showed his comic brilliance in a song that became a major highlight of the hit movie. It was the longest track he performed at the time and once again showed Bollywood that simple dance moves can make the biggest impact.

Angrezi Mein Kehte Hain Ke I Love You from Khud-Daar (1982): It is great telling someone you love them and even better if you sing the same sentiments in multiple languages. Bachchan beautifully adds extra energy into a delightful duet every Bollywood fan has sung along to at some point. The real legends emulated Bachchan and sang it to their partners. 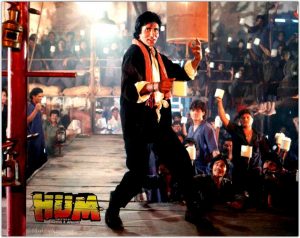 Jooma Chumma De De from Hum (1991): This catchy song about trying to get a kiss became somewhat of an anthem for Romeos around the world largely thanks to the cheeky lyrics, suggestive dance moves, and high energy performance delivered by Bachchan. Although it is often frowned upon in some corners today, the naughtiness of the song broke shackles in a conservative industry.

Na Na Na Na Na Re from Mrityudaata (1997): Today Bollywood songs are dominated by Punjabi singers and this track kick-started that terrific trend in a big way. The game-changing duet picturised on Daler Mehndi and Bachchan not only became a famous cinematic moment, but also injected adrenaline into the Indian pop movement. 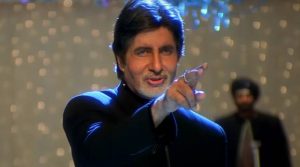 Say Shava Shava from Kabhi Khushi Kabhie Gham (2001): The record-breaking family drama showed quite comprehensively that old age was no barrier to the Big B carrying a major Bollywood musical number. The song was filled with superstars but the brightest by far was a legendary actor able to keep pace with a new generation and show them just how it is done.

Kajra Re from Bunty Aur Babli (2005): This magnificent monster hit remains one of the biggest dance numbers in Hindi cinema history. Apart from being awesomely catchy, what made this song extra special was the way it was picturised on Amitabh Bachchan, Abhishek Bachchan and Aishwarya Rai. The song cemented the Big B’s position as the coolest grandpa in Bollywood.

Rock ‘N’ Roll Soniye from Kabhi Alvida Naa Kehna (2006): The catchy number took parties around the world by storm and had everyone grooving along. Dressed in a sharp suit, the great legend teams up with his son Abhishek Bachchan and actress Preity Zinta for a feel-good number that is powered by a brilliant beat and their infectious dance moves. 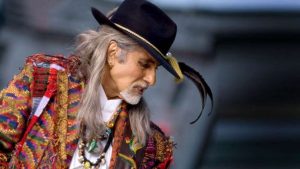 Jhoom from Jhoom Barabar Jhoom (2007): The only thing that most people remember about this complicated comedy is the opening musical number performed brilliantly by the legendary actor, dressed up as an eye-catching London busker. The catchy title track combined well with his star presence and is the first thing everyone thinks about when the film is mentioned.

Badumbaaa from 102 Not Out (2018): This was the first time a 102-year-old character performed any kind of song in Bollywood, let alone a dance number, so has to be included. Apart from senior citizens having a great time dancing, what made this loveable Zumba-inspired song extra special was that legendary actors Amitabh Bachchan and Rishi Kapoor provided their own vocals.

Beyond Bollywood
WHETHER it was live performances or interesting collaborations, Amitabh Bachchan made a musical impact beyond Hindi cinema.

Here are the two most noteworthy:
■ Bachchan became the first big Bollywood star to record a massively successful pop album when he teamed up with music producer Bally Sagoo for Aby Baby. The 1996 hit album saw him mix up new songs with cover versions of his own classics. 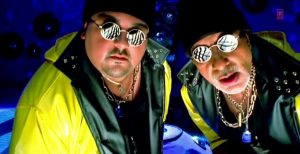 ■ One of the greatest pop duets saw singer Adnan Sami team up with Bachchan for the cheeky song Kabhi Nahi, which was accompanied by an awesome music video.