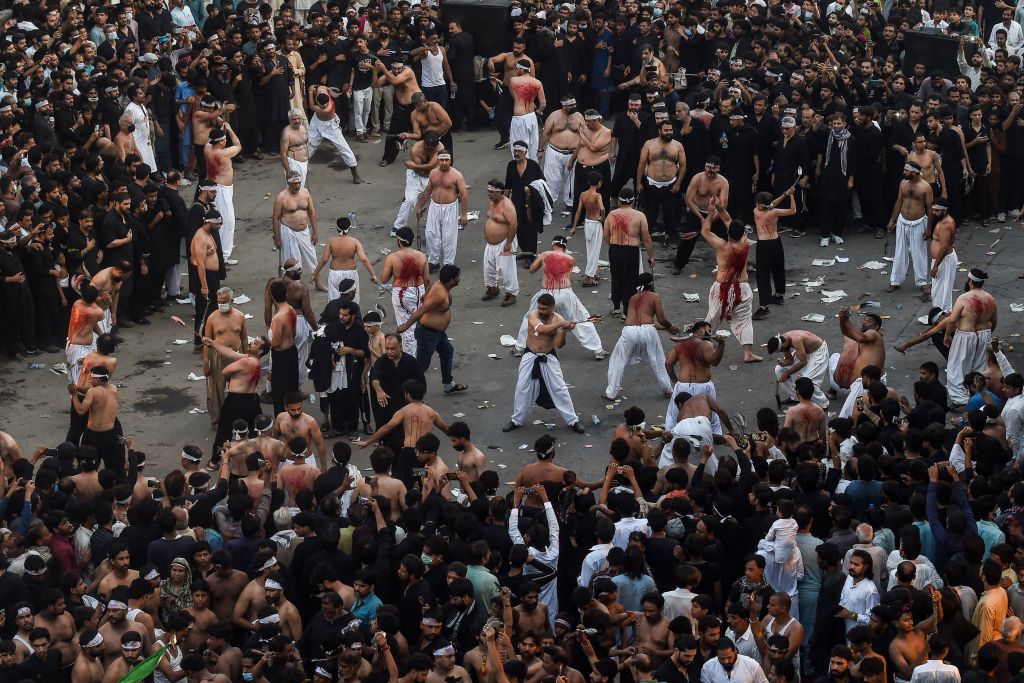 Shiite Muslims flagellate themselves during an Ashura procession in Lahore on August 19, 2021, to mark the death of Imam Hussein, the grandson of Prophet Mohammad. (Photo by ARIF ALI/AFP via Getty Images)

A POWERFUL explosion ripped through a Muharram procession in central Pakistan’s Punjab province on Thursday (19), killing at least two people, including a seven-year-old girl.

A senior minister and police officials said 59 people were injured in the blast.

The incident took place at Bahawalnagar, some 260 kilometres from Lahore when a Shia procession was heading to an Imambargah as part of the annual Ashura commemoration.

Punjab home minister Raja Basharat confirmed that at least two people were killed in the attack carried out by a man who threw a hand grenade at the mourners in the procession which was passing near a mosque.

He said the attacker was arrested and pictures shared on social media showed police dragging a bearded and shirtless man in handcuffs.

Basharat said two of the injured were in critical conditions at Bahawalpur’s Victoria Hospital.

Videos circulating on social media showed people running around in panic after the blast and ambulances rushing injured persons to the hospital.

Opposition senator Sehar Kamran termed the blast a “cracker attack” and prayed for the recovery of those who were injured.

Bahawalnagar was trending on Twitter on Thursday (19), even as mobile services remained suspended in Pakistan’s major cities, including Karachi, Hyderabad, Quetta, and Sukkur to avoid any untoward incident during the Ashura processions.

The annual commemoration mourns the death of Prophet Muhammad’s grandson Hussein, one of the most revered figures of Shiite Muslims.