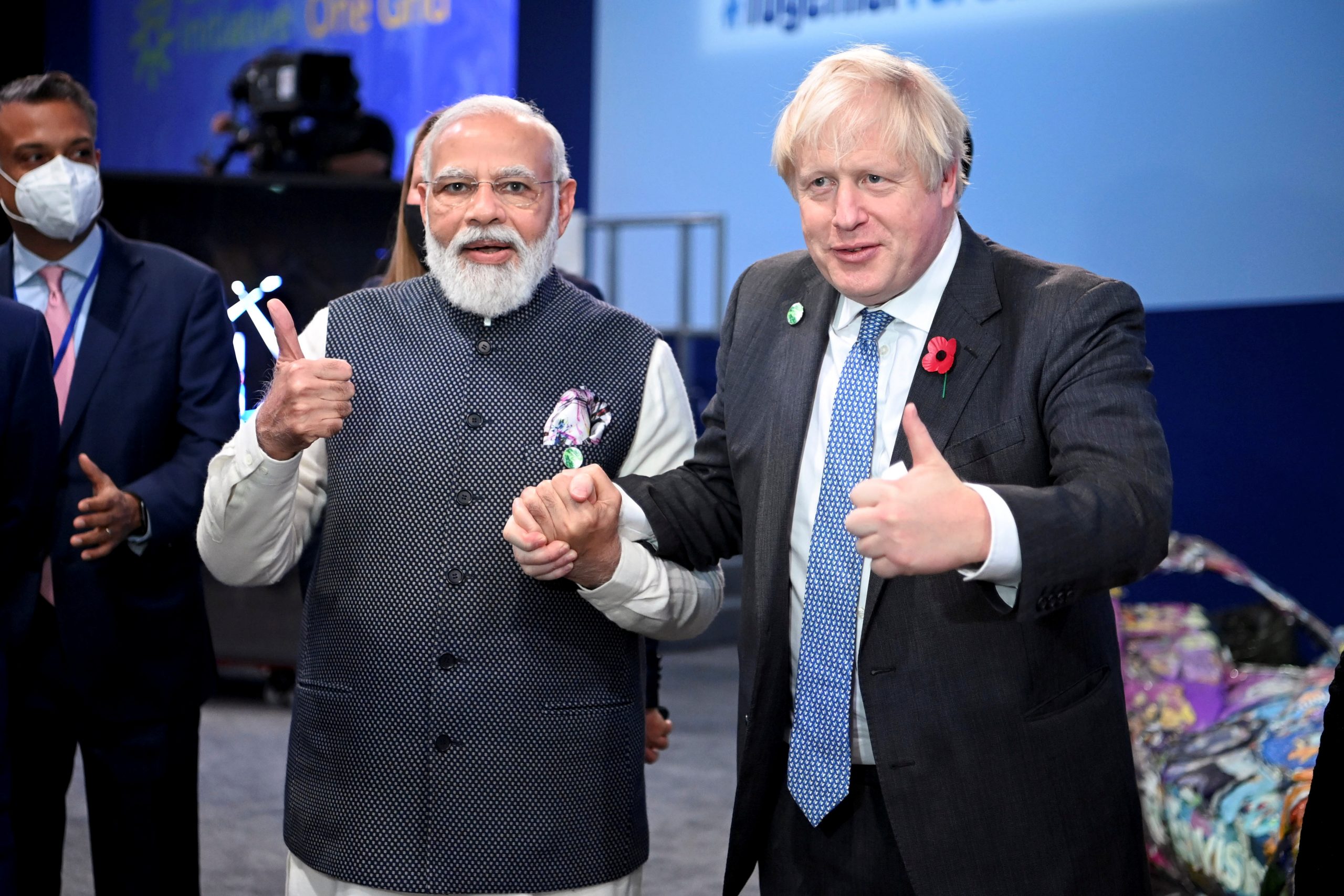 Modi and Johnson during the COP26 Summit in Glasgow. (Jeff J Mitchell/Pool via REUTERS)

BRITISH ministers are eager to ease immigration rules to make it easier for Indians to live and work in the UK as part of trade talks that are due to start between the two nations within weeks.

According to a report by The Times, international trade secretary Anne-Marie Trevelyan is likely to travel to New Delhi in January to begin talks on a potential agreement. The Times said that she is likely to use her visit to open the prospect of relaxing immigration rules for Indians, a key demand that has been put forward by New Delhi.

British foreign secretary Liz Truss has backed Trevelyan as she has emphasised on closer ties with India at the top of her government’s agenda in a bid to counter China’s influence.

But not all are in agreement.

Home secretary Priti Patel, for instance, is against the offer, the daily report said.

One option which is being weighed is having a scheme which is similar to the one that is agreed with Australia. Under that scheme, young Indians will be allowed to come and work in the UK for up to three years.

A second option would be to slash visa fees for students and permit them to stay in the UK for a period post their graduation.
There could also be reductions in fees for visas for both work and tourism. Currently, an Indian citizen has to pay up to £1,400 for a work visa, while for students, it is £348 and for tourists, £95. For British tourists travelling to India, the fee is £110. A one-year business visa, on the other hand, costs £165.

British ministers feel that a trade deal with India, which is predicted to emerge as the world’s third-largest economy by 2050, could prove to be transformational and give their country’s businesses a head start in one of the most lucrative markets in the world.

The Times cited a senior government source saying that there was a general acceptance from ministers that the price of such an agreement would be to make a “generous” offer on the visas.

Recently, British prime minister Boris Johnson promised to go “further and faster” on making use of post-Brexit freedoms to forge new trade agreements and ditch European Union regulation. He said he would “deliver on the promise of Brexit” by backing global trade and conducting a systematic review of all European laws that are still on the statute books.

According to one government figure in the UK, “The tech and digital space in India is still hugely protectionist and if we could open up even a slither of access it would put us ahead of the game.”

A spokesperson at the department for international trade said: “A free-trade agreement [with India] will open up huge opportunities for UK businesses.”

In 2020, the Indian government boasted about a milestone in a decades-old campaign to attract overseas capital after it crossed the $500-billion (£369 billion) threshold for inflows. While giants such as Amazon, Walmart, Google and Facebook have put faith in India’s digital economy, yet the country has been overshadowed by China when it comes to overseas investment.

India also has a problem of mercurial regulation and unfavourable climate for overseas investors at times. In 2012, the country changed its tax laws that allowed it to claim taxes on deals involving Indian assets that were made years ago.

The move saw companies such as Vodafone and Cairn Energy engaging in long disputes and they left a damaging impact on foreign investors’ plans about India.

Last year, India’s Narendra Modi government scrapped the retrospective tax rules but it is yet to be seen how fast that move brings the desired stability sought by foreign investors in the country.