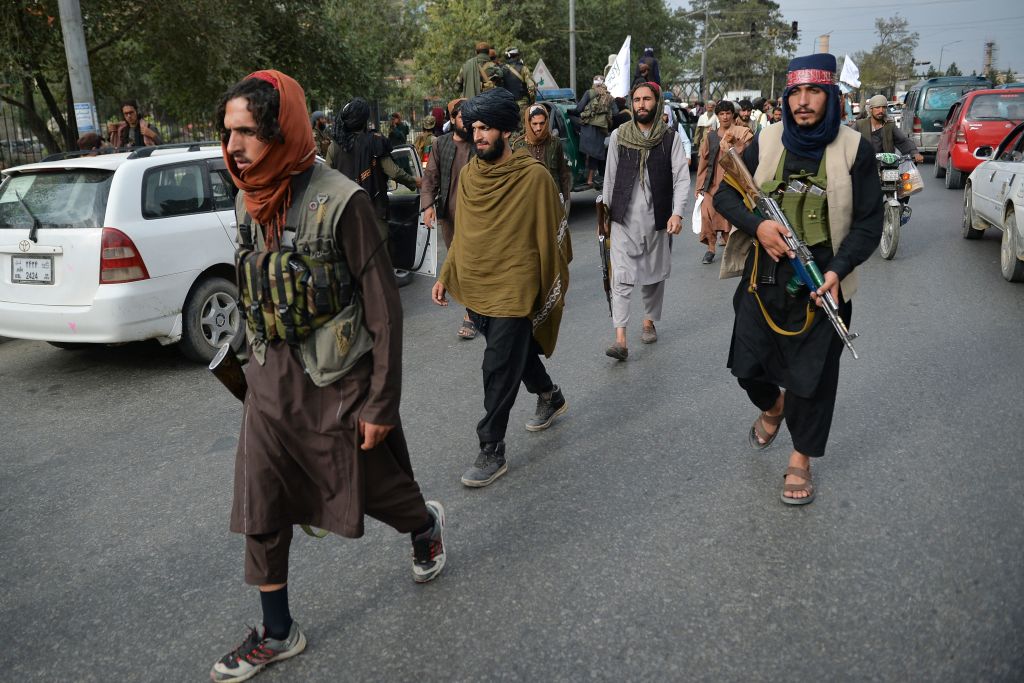 Taliban fighters gather along a street during a rally in Kabul on August 31, 2021 as they celebrate after the US pulled all its troops out of the country to end a brutal 20-year war, one that started and ended with the hardline Islamist in power. (Photo by HOSHANG HASHIMI/AFP via Getty Images)

The envoy, Deepak Mittal, met Sher Mohammad Abbas Stanekzai, the head of the Taliban’s political office in Doha, at the request of the Taliban, the foreign ministry said.

India has long had concerns about the Taliban because of the group’s close ties with Pakistan. The foreign ministry said the two sides discussed the safety of Indians left behind in Afghanistan.

“The Taliban representative assured the ambassador that these issues would be positively addressed,” the foreign ministry said.

The talks come days after Stanekzai was quoted in the local press as saying the Taliban wanted political and economic ties with India.

There was no immediate comment from the Taliban on the talks with the Indians.

Meanwhile, it is understood that a group comprising India’s foreign minister S Jaishankar, national security advisor Ajit Doval and other senior officials is focusing on India’s immediate priorities in Afghanistan.

Official sources said on Tuesday (31) the group met regularly in the past few days following a direction from prime minister Narendra Modi.

India’s immediate priorities have been the safe return of the Indians still in Afghanistan, bringing back the Afghan nationals who stood by New Delhi, and ensuring that Afghan soil is not used for terrorism directed at India, the sources added.

The sources also said the Indian group has also been monitoring the ground situation in Afghanistan and international reactions.

India has been in touch with all major regional players including those in the Gulf region on the developments in Afghanistan.

The UN Security Council, under India’s presidency, on Monday (30) adopted a resolution demanding that the territory of Afghanistan not be used to threaten any country or shelter terrorists.

There have been mounting concerns in India over the possibility of rise in activities of various terror groups including Lashkar-e-Taiba and Jaish-e-Mohammed from Taliban-controlled Afghanistan.

India is adopting a wait and watch approach to see whether the new leadership in Afghanistan will be solely led by the Taliban or include a power-sharing arrangement with other Afghan leaders.

India has invested more than $3 billion (£2.1 bn) in development work in Afghanistan and had built close ties with the US-backed Kabul government. But with the rapid advance of the Taliban, the Indian government was facing criticism at home for not opening a channel of communication to the militants.

The big fear is that militant groups fighting Indian rule in Kashmir will become emboldened with the victory of the Taliban over foreign forces, one of the sources said.

“Ambassador Mittal raised India’s concern that Afghanistan’s soil should not be used for anti-Indian activities and terrorism in any manner,” the foreign ministry said.

When the Taliban were last in power from 1996-2001, India along with Russia and Iran supported the Northern Alliance that pursued armed resistance against them.

Stanekzai, who Indian officials say received training in an Indian military academy as an Afghan officer in the 1980s, had informally reached out to India last month, asking it not to shut down its embassy, the source said.