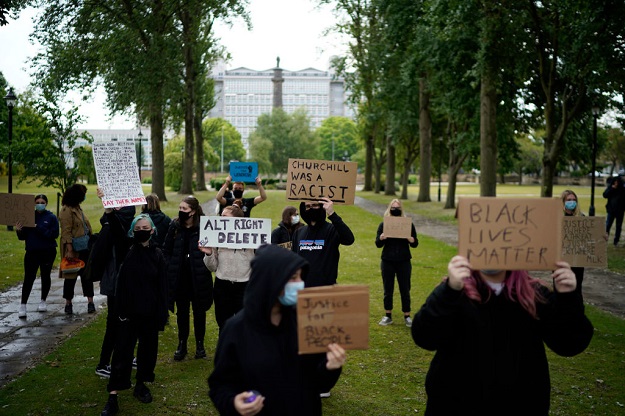 Demonstrators hold up signs during a Black Lives Matter protest on June 10, 2020 in Hull, the UK (Photo: Christopher Furlong/Getty Images).

BLACK lives matter. That has been the central theme of protests in America and Britain against racial inequality.

The British demonstrations showed solidarity with those protesting the shocking killing of George Floyd in America, yet their main message was to highlight how much racial inequality is unfinished business in Britain too.

Going ahead while mass gatherings are banned sparked controversy. The argument that ‘racism is a pandemic too’ risks mixing metaphor and deadly reality – particularly given higher death rates from Covid for ethnic minorities.

On Covid’s inequalities of life and death, a disap­pointing Public Health England review confirmed what was already known, yet neither explained the causes nor made any recommendations. Three more inquiries were announced this week, from the Gov­ernment Equalities Unit; the EHRC and the Com­mons Equality Select Committee. How many re­views will it take to create the action plan we need?

The Black Lives Matter protest marches were overwhelmingly peaceful, but the few intent on clashing with the police made headlines. Protesters in Bristol took the law into their own hands to top­ple the statue of Edward Colston in Bristol, yet could point to how years of thoughtful civic pres­sure had not stopped the city from honouring the greatest slave trader of his age. Mindless acts of vandalism against London memorials could offer no such mitigation, defacing Winston Churchill who, whatever his flaws, defeated the Nazis, and even Abraham Lincoln, a hero of emancipation.

Debates about the protest fringes could obscure significant changes in the way we talk about racism in Britain. These are black-led protests, inviting support from all ethnic groups to focus on the spe­cific experiences of anti-black racism. The idea of “political blackness” as a unifying banner fades further into history. Most British Asians long ago ceased to call themselves “black”, if they ever had.

Black Lives Matter too challenges how the clunky policy-speak of “BAME” can obscure more than it illuminates, when patterns of disadvantage differ across minority groups more than ever before. That this might bring anti-black racism in Asian com­munities under sharper focus too is overdue. The challenge will remain as to how to build the broadest coalitions to make change happen in our country.

This moment brings the story of generational change into sharper focus. Britain has come a long way on reducing overt racism. Minority voices in public life were still a novelty when I left university. So, my own lived experience, in my mid-40s, is of how the pace of change sped up.

This rising generation is impatient that this story of incremental progress does not focus mostly on what still needs to change. British Future’s research on race finds a striking generational paradox in perceptions of progress. Young adults, in the sixth-forms, universities and recent graduates, aged 18-24, are undoubtedly part of the most racially inclu­sive generation this country has ever seen – but are least likely to think that any progress is being made.

It is not just the lack of lived experience of the ‘bad old days’ of the 1970s and 1980s. This Stormzy and Raheem Sterling generation are hardly going to be grateful to not get beaten up by NF [National Front] thugs. The mostly British-born generation will laugh if still told to “go back to where they came from” but have a birthright claim to the equal op­portunity in Britain, which every prime minister speaks of, now becoming reality.

So attitudes did change for the better, but expec­tations have risen faster. These protests will catapult more rightfully impatient voices of twenty-some­thing black Britain into our public conversation. In Donald Trump’s America, “Black Lives Matter” and “All Lives Matter” are part of the culture war al­ready. Yet in Britain, Boris Johnson has adopted the slogan of the movement, as have corporations, charities and other institutions. Using a hashtag on social media is the easy bit. The question is what action will follow.

Rising generational expectations will challenge every corporation and charity that talks about di­versity without yet reflecting it at the top table. Ex­pect more cultural conflict within the workplace. Each year’s graduates cohort increases the pressure to walk the walk too.

Navigating difficult conversations about race will be a theme of the 2020s. Can we defuse the dangers of the “them and us” dynamics of social polarisa­tion – and find common ground on race inequality and fair chances for all?

The NHS is our greatest symbol of integration and shared pride in modern Britain. To mark its birthday on July 5, the new Together coalition is calling on the whole country to come together for a day where we connect with neighbours and thank all those who are helping us get through the pan­demic, as we begin to think about what should change beyond it.

We will need to have more difficult conversa­tions on race. That means putting more energy into what can unite us too.

Sunder Katwala is also a founding member of the Together coalition: www.together.org.uk.