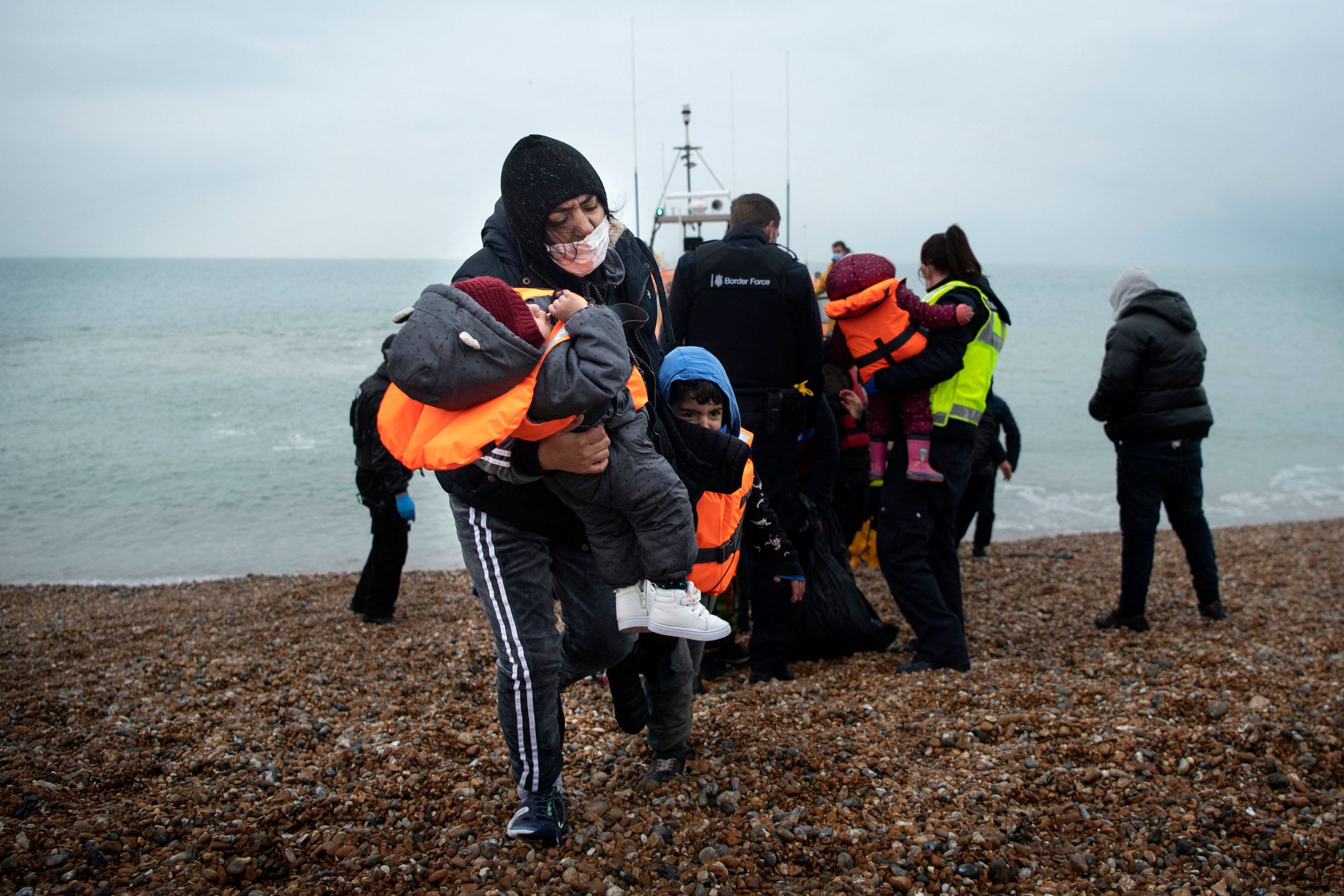 A migrant carries her children after being helped ashore from a RNLI (Royal National Lifeboat Institution) lifeboat at a beach in Dungeness. (Photo by BEN STANSALL/AFP via Getty Images)

British prime minister Boris Johnson on Wednesday said he was horrified after at least 27 migrants died trying to cross the Channel from France, offering closer cooperation to tackle criminal gangs behind the practice.

“I am shocked, appalled and deeply saddened by the loss of life at sea,” he said after convening top officials for crisis talks on the tragedy.

The disaster is the single worst loss of life recorded in recent times from migrant crossings in the Channel, and comes as tensions grow between London and Paris over the record numbers of people braving the perilous crossing.

More than 25,700 people have made the cross-Channel journey in small boats this year — three times the total for the whole of 2020, according to data compiled by Britain’s PA news agency.

The increasing numbers of arrivals, although still below those being taken in by Britain’s closest neighbours, have put Johnson’s government and his interior minister Priti Patel under pressure.

“Taking back control” and securing Britain’s borders was a key pledge of the “leave” campaign during the 2016 Brexit referendum to take the country out of the European Union.

But Britain — out of the EU in full since January this year — has found the practicalities of doing so more problematic, including the need to cooperate closely with its former EU counterparts.

Johnson said the deaths underscored the dangers of trying to cross the busy shipping lane, and the need to do more to crack down on people traffickers exploiting the vulnerable.

“There is no doubt at all that the gangs concerned, unless they are shown that their business model won’t work and they can’t simply get people over the Channel from France to the UK, they will continue to deceive people and put people’s lives at risk and get away with murder,” he said.

He said Britain had faced “difficulties persuading some of our partners, particularly the French, to do things in a way that the situation deserves”.

“What we want now is to do more together and that’s the offer that we’re making.”

Natalie Elphicke, the Conservative MP for the Channel port of Dover called the sinking “an absolute tragedy” and demonstrated the need to stop the crossings at source.

“It underlines why saving lives at sea starts by stopping the boats entering the water in the first place,” she said.

“As winter is approaching the seas will get rougher, the water colder, the risk of even more lives tragically being lost greater.

“That’s why stopping these dangerous crossings is the humanitarian and right thing to do.”

But it has made its frustration clear with Paris that so many are still getting across, as local authorities in southeast England struggle to cope with the logistics of so many new arrivals.

The chief executive of the Refugee Council, Enver Solomon, said the deaths were “heartbreaking” and safe routes were needed for those “in desperate need of protection”.

“Every day, people are forced to flee their home through no fault of their own,” he added.

“Now is the time to end the cruel and ineffective tactic of seeking to punish or push away those who try and find safety in our country.”

Other charities also called for the government to scrap its proposals to tighten entry restrictions for migrants crossing the Channel, and off-shore processing centres.

Plans include criminalising asylum seekers who have travelled through “safe” third countries such as France, and the targeting of people traffickers.