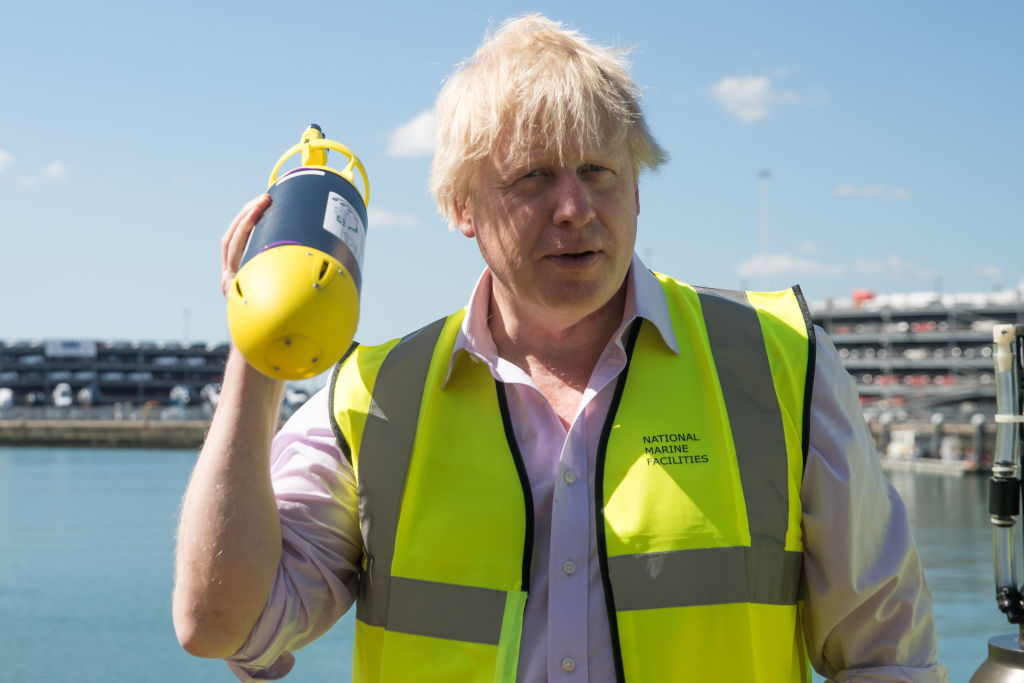 A file photo of Boris Johnson holding a miniature autonomous submarine on a visit to the National Oceanography Centre in Southampton, England, during his stint as the foreign secretary in 2018. (Photo by Matt Cardy/Getty Images)

A GREEN hydrogen-powered underwater transportation submarine system being developed by a company led by an Indian-origin CEO has been named among the winners of the UK government’s Clean Maritime Demonstration Competition.

Dhruv Boruah’s Oceanways won backing from the £23-million government-funded research and development (R&D) drive with its concept of a fully-automated net positive submarine fleet, powered entirely on green hydrogen. It could help cleanse the oceans of toxic pollution by collecting microplastics on its pilot route between Glasgow and Belfast.

While transporting cargo shipments, the fleet could secure significant emission savings of 27 tons of carbon dioxide or CO2 emissions in the first year of operation.

“We would like to thank our transport secretary, Grant Shapps MP, for selecting Oceanways to support the department for transport’s mission to decarbonise shipping and aid our prime minister’s commitment to building back better,” said Boruah, founder and CEO of Oceanways.

“Time is running out and it is imperative we don’t settle for 1 per cent more efficiency in an existing system, but instead, radically rethink to create innovative solutions,” he said on Wednesday (15).

The entrepreneur is confident that the autonomous, or driverless, system may well be in a position to transport humans in the future, following its successful use to transport products.

“It’s not just #JetZero. Oceanways has assembled a world-class team to pioneer #SubZero by creating the new market of net positive underwater transport systems with zero-emission cargo submarines as an innovative tool to decarbonise shipping and clean up our ocean,” he said.

The green submarines are expected to be in use across British waters by 2026 and help address freight traffic challenges, including a shortage of drivers. Oceanways says it will be servicing short point-to-point routes with fast, zero-emission delivery.

It claims the submarines are superior to a cargo ship in almost every way: “not only they are weather independent, can reach hard to reach areas and a lot cheaper to build and operate, but it’s also quieter, secure, more stable, and cleaner, with zero fumes or pollutants”.

“As a proud island nation built on our maritime prowess, it is only right that we lead by example when it comes to decarbonising the sector and building back greener,” said Shapps, the minister who unveiled the prize-winners during the London Shipping Week in Greenwich.

“The projects announced today showcase the best of British innovation, revolutionising existing technology and infrastructure to slash emissions, create jobs and get us another step closer to our decarbonisation targets,” he said.

Also among the winners is an all-electric charge-point connected to an offshore wind turbine. The charge-points will be able to power boats using 100 per cent renewable energy generated from the turbine.

This offers potential savings of up to 131,100 tons of carbon dioxide equivalent (CO2e) emissions a year – the equivalent of removing over 62,000 cars from our roads. Similar to roadside electric vehicle charge-points, these will be operated by ‘semi-automated control, meaning that sailors can moor up by the wind turbine charge-point, plugin, charge up, then sail on.