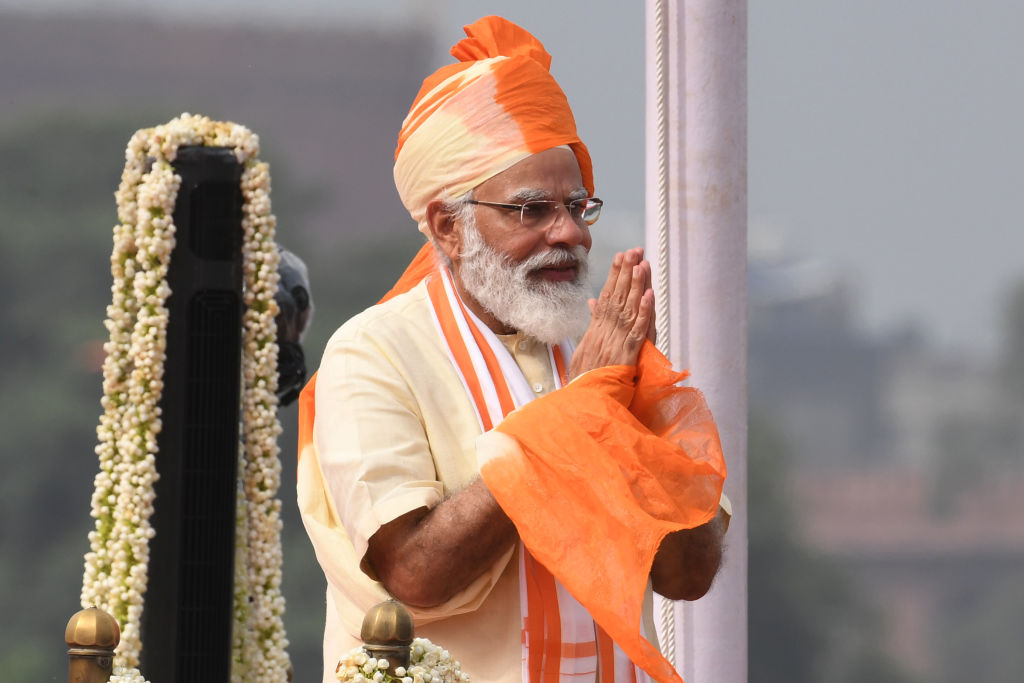 India's Prime Minister Narendra Modi gestures after his speech to the nation during a ceremony to celebrate India's 74th Independence Day, which marks the end of British colonial rule, at the Red Fort in New Delhi on August 15, 2020. (Photo by PRAKASH SINGH/AFP via Getty Images)
INDIA’s prime minister said Saturday (15) his country has done well in containing the coronavirus pandemic and announced $1.46 trillion infrastructure projects to boost the sagging economy.

The key lesson India learnt from the pandemic is to become self-reliant in manufacturing and developing itself as a key supply chain destination for international companies, prime minister Narendra Modi said.

“The coronavirus epidemic is a big crisis, but it can’t stall India’s economic progress,’’ Modi said in a speech from New Delhi’s 17th century Mughal-era Red Fort to mark 74 years of the country’s independence from British rule. He wore an orange and white turban with a long scarf around his neck.

He also said that three vaccines are in different phases of testing in India and it will start mass production as soon as it got a green light from scientists. “Detailed plans are in place for large-scale production of corona vaccine and making it available to every Indian,” he said.

India’s coronavirus death toll overtook Britain’s this week to become the fourth-highest in the world as the country reported over 2.5 million confirmed cases, just behind the US and Brazil.

Modi also announced a national digital heath plan under which every Indian will get an identity card containing all health-related information.

The celebrations were curtailed on Saturday because of the pandemic, with invitations going only to 4,000 guests instead of normal 20,000, media reports said.

The International Monetary Fund projected a contraction of 4.5% for the Indian economy in 2020, a “historic low,” but said the country is expected to bounce back in 2021.

Modi said the government has identified 7,000 infrastructure projects to offset the economic impact of the pandemic.

“Infrastructure will not be created in silos anymore. All infrastructure has to be comprehensive, integrated and linked to each other. Multi-modal connectivity infrastructure is the way forward,” he said.

He said that India saw a record 18 per cent jump in foreign direct investment in the past year, a signal that the international companies are looking at the country.

Modi didn’t refer to China directly, but India is trying to capitalize on its rival’s rising production costs and deteriorating ties with the United States and European nations to become a replacement home for large multinationals.

Referring to border tensions with China in the Ladakh area, he said Indian forces had given a befitting response in the mountainous region where thousands of soldiers from the two countries remain in a tense standoff since May. India said 20 of its troops died in hand combat with Chinese troops on June 15.

“Whether it’s terrorism or expansionism, India is fighting the challenges bravely,” Modi said in apparent references to threats from neighboring Pakistan and China.