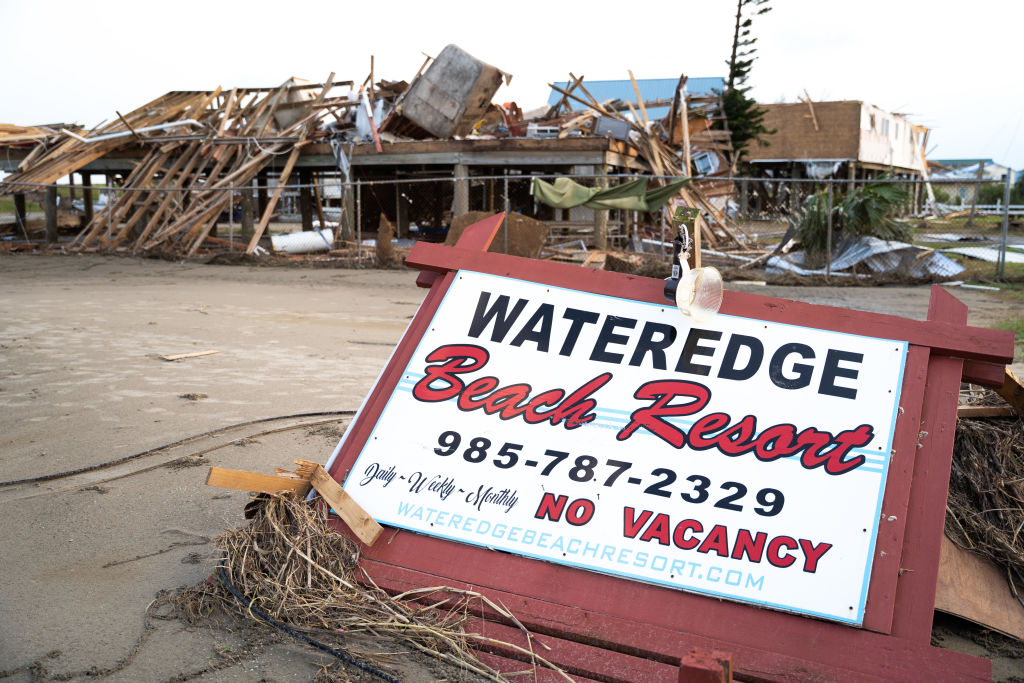 A sign for a beach resort rests among storm debris in the wake of Hurricane Ida on September 4, 2021 in Grand Isle, Louisiana. (Photo by Sean Rayford/Getty Images)

FOUR Indian Americans have been killed in the US states of New Jersey and New York after they were swept away by flash floods caused by Hurricane Ida.

Hurricane Ida, which made landfall on August 29 in Port Fourchon, Louisiana, is the second-most destructive hurricane to hit the state on record, only after Hurricane Katrina (2005).

According to reports, 31-year-old Dhanush Reddy from Edison died last week after being swept into a 36-inch storm sewer pipe in South Plainfield, New Jersey.

Authorities said two men were swept into the pipe, which goes from South  Plainfield to Piscataway. While one of the men was rescued, the other could not be located and authorities found Reddy’s body in a wooded area a few miles away the day after he drowned.

A report in The New York Times said that the Ramskriets, a family of four, were in their Queens home when flood water reached their ankles. The flood swept the elderly Dameshwar Ramskriets across the home as he clutched for the hand of his wife Tara.

‘I tried to hold on to my wife, and she was trying to hold on to me,’ he said. ‘But the water pushed me away and I couldn’t feel her hand anymore.’ Tara Ramskriet and her 22-year-old son, Nick, drowned.

Another Indian-origin person, Malathi Kanche, 46, a software designer, was driving home with her 15-year-old daughter on Wednesday (1) when her vehicle halted in waist-deep floodwater on Route 22 of Bridgewater, New Jersey.

Kanche and her daughter held onto a tree as floodwaters pulled them, according to a family friend, Mansi Mago, but the tree fell, pulling Kanche in the torrent. Initially, officials put Kanche on the list of ‘missing persons’.

She was confirmed dead on Friday (3).

A Nepali family who lived in a basement apartment in Queens also died as the storm waters inundated their apartment, leaving them trapped inside.

Mingma Sherpa, her husband, Lobsang Lama, and their little boy named Ang all drowned in the storm.

Authorities in New Jersey are searching with the help of drones and boats for two missing young Indian-origin persons.

Nidhi Rana, 18, and Ayush Rana, 21, ‘were last seen Wednesday evening when Ayush’s car was caught in the floodwaters’, a report said.

Search for the pair continued Sunday as Passaic firefighters continued their search along the Passaic River for the two.

A strong reminder of Katrina

New Orleans area hotelier Vimal Patel has said that Ida was a strong reminder of Katrina.

‘This is a very strong, very strong reminder of Katrina,’ said Patel, who is president of QHotels Management in LaPlace, Louisiana.

‘During Katrina, we were about to celebrate my daughter’s fifth birthday. But, we ended up taking a shelter at the Hampton Inn in LaPlace and we lost our water and we were stranded there for days.’

For Ida, he decided to close all of his hotels, evacuate his guests and leave for safer ground.

‘It was a stark, dark reminder of the Katrina, but luckily we had no guests in the hotel and we closed everything down,’ he said.

By Wednesday (1), as the remnants of Ida was causing massive flooding in New York, Vimal Patel said his properties were all still out of power. All nine of his hotels had sustained damage.

‘Now we have a challenge with the transportation of gas. Obviously, Laplace doesn’t have electricity and no running water,’ he said.

‘We are scouting in different places, travelling 75, 100 miles around trying to fill up gas.’

Hotels in the Thibodaux and Houma areas sustained very minimum damage to the members’ hotel.

‘Kenner and south of New Orleans, there are quite a few properties that are damaged,’ Ricky said. ‘The hardest hit was Grand Isle. As far as I know, we don’t have any members there, but there are properties in a Boutte, Kenner and Metairie [owned by AAHOA members] and some of those properties are damaged.’

Other hotels are receiving evacuees from the storm, Ricky said, but most of the hotels are pre-booked up with the utility workers at this time. He said precautions are being taken in light of the resurging Covid-19 pandemic.