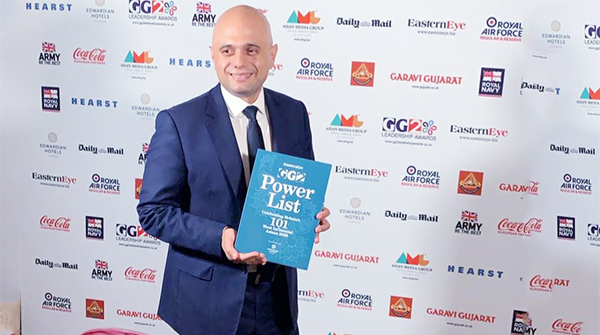 A LEADING corporate boss, a prominent mental health advocate and a lawyer to the stars were among winners at this year’s annual GG2 Leadership Awards in London on Thursday evening (10).

Nitin Paranjpe, chief operating officer at Unilever, one of the world’s most renowned consumer goods companies, scooped the top honour – the coveted GG2 Hammer Award – for his efforts in blazing a trail for diversity.

Businessman Viswas Raghavan, chief executive of JPMorgan for Europe, the Middle East and Africa, was honoured with the GG2 Man of the Year award, while City Mental Health Alliance founder Poppy Jaman OBE scooped the Woman of the Year.

Ayesha Vardag, who is commonly labelled as ‘Britain’s Top Divorce Lawyer’, won the GG2 Outstanding Achievement in Law award. The founder and president of law firm Vardags specialises in high-net-worth divorce, often with an international or celebrity element.

The event, now in its 21st year, celebrates Britain’s most enterprising and talented black, Asian and minority high achievers.

The evening also saw the launch of the GG2 Power List 2020, a ranking of the 101 most influential British Asians.

“I am proud to live in a Britain where anyone can become Chancellor, whatever their background,” he said. “Each person on this year’s Power List has their own story to tell, but the example they set to young Asian women and men is helping to create a better and brighter future for Britain.

“I commend and congratulate them all.”

In total, 14 awards were presented on the night.

Among the winners were:

BBC radio presenter Nihal Arthanayake was the presenter of the awards ceremony while the multi-awarding winning classical group Ayoub Sisters were on hand to entertain to the audience.

The event also saw charitable support for the Isha Foundation and the Cauvery Calling initiative, which aims to revitalise one of the most important depleting rivers in south India – the River Cauvery.

Earlier in the day, the GG2 Diversity Conference heard from a range of speakers about race, identity and the gender pay gap, among other issues.

GG2 Spirit in the Community Award sponsored by Royal Navy

GG2 Young Journalist of the Year sponsored by The Daily Mail

GG2 Icon of the Year

GG2 Woman of the Year sponsored by Edwardian Hotels London

GG2 Man of the Year sponsored by Sun and Sand