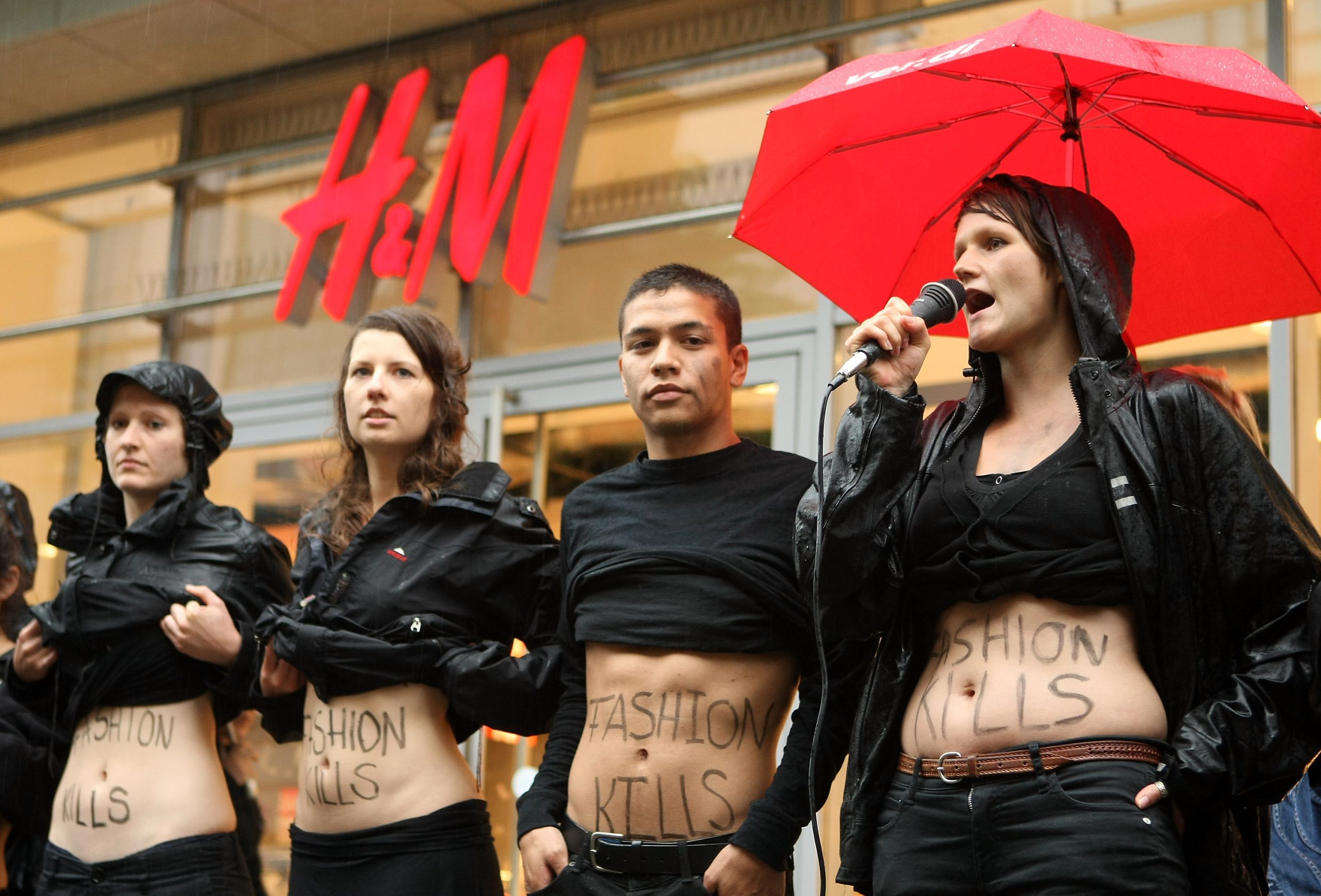 Young activists from the labor rights group ver.di show their stomachs with the words “Fashion Kills” written on them during a demonstration in the rain against working conditions at production sites used by the H&M clothing chain in Bangladesh on July 14, 2012 (Photo by Adam Berry/Getty Images)

Labour activists on Thursday (22) urged brands to extend a factory safety deal in Bangladesh ahead of the eighth anniversary of the Rana Plaza disaster, in which some 1,100 workers died.

The collapse of the eight-storey building near Dhaka – the industry’s deadliest accident – on April 24, 2013 led some 200 brands, including H&M and Zara, to sign the Accord on Fire and Building Safety in Bangladesh. That agreement expires on May 31.

Labour leaders want the Accord to be renewed in Bangladesh, the world’s second-largest exporter of garments, and extended to other countries with dangerous working conditions.

“It is vital that brands and retailers sourcing from Bangladesh ensure that the one major achievement that came out of this disaster is not lost,” said Ineke Zeldenrust, coordinator of the pressure group Clean Clothes Campaign.

“There are five weeks to go until the Accord agreement runs out, but the first Accord came about in only three. Brands can make it happen if they want to.”

The legally-binding Accord held thousands of inspections and banned unsafe factories from supplying its signatory buyers, helping make some 1,600 factories safer for 2 million workers, according to labour activists.

But Bangladeshi manufacturers are now backing the Ready-Made Garments Sustainability Council (RSC), which has taken over the work of the Accord. It includes trade unions, brands and factory owners.

“We have transitioned from the regime of foreigners coming and prescribing what Bangladeshis have to do to one which is more collaborative and national,” said Miran Ali, vice president of Bangladesh Garment Manufacturers and Exporters Association.

“I believe that RSC can only improve on what the Accord did … The Accord in 2013 was different, over time they modified their practices and protocols. Similarly RSC will modify and develop their protocols to provide more safety.”

Kalpona Akter, head of the Bangladesh Centre for Worker Solidarity, said that the RSC would not be able to pressure brands or suppliers without a legally-binding global agreement.

H&M, one of Bangladesh’s biggest buyers, said in an emailed statement that it would support the RSC.

“We see continuous progress that has been carried on after the responsibility was handed over from the Accord to the RSC,” said a company spokeswoman Masarrat Quader.

“We are now focused on securing the independence, resources and financing of this organisation to secure workplace safety for all workers in Bangladesh and to enable a sustainable change that the industry can own and sustain.”

Bangladesh’s garment sector, which employs nearly 4 million workers, was hit hard last year as brands shut shops due to the pandemic and cancelled orders worth millions of dollars. The industry has seen a recovery but its future remains uncertain.

The charity ActionAid said on Thursday that almost 60 per cent of 200 Rana Plaza survivors that it surveyed were unemployed and several still suffered physical and mental trauma and could not work for extended periods of time.

“Rana Plaza survivors who are already in a precarious state … have been doubly impacted during the pandemic. They need relief,” ActionAid said.